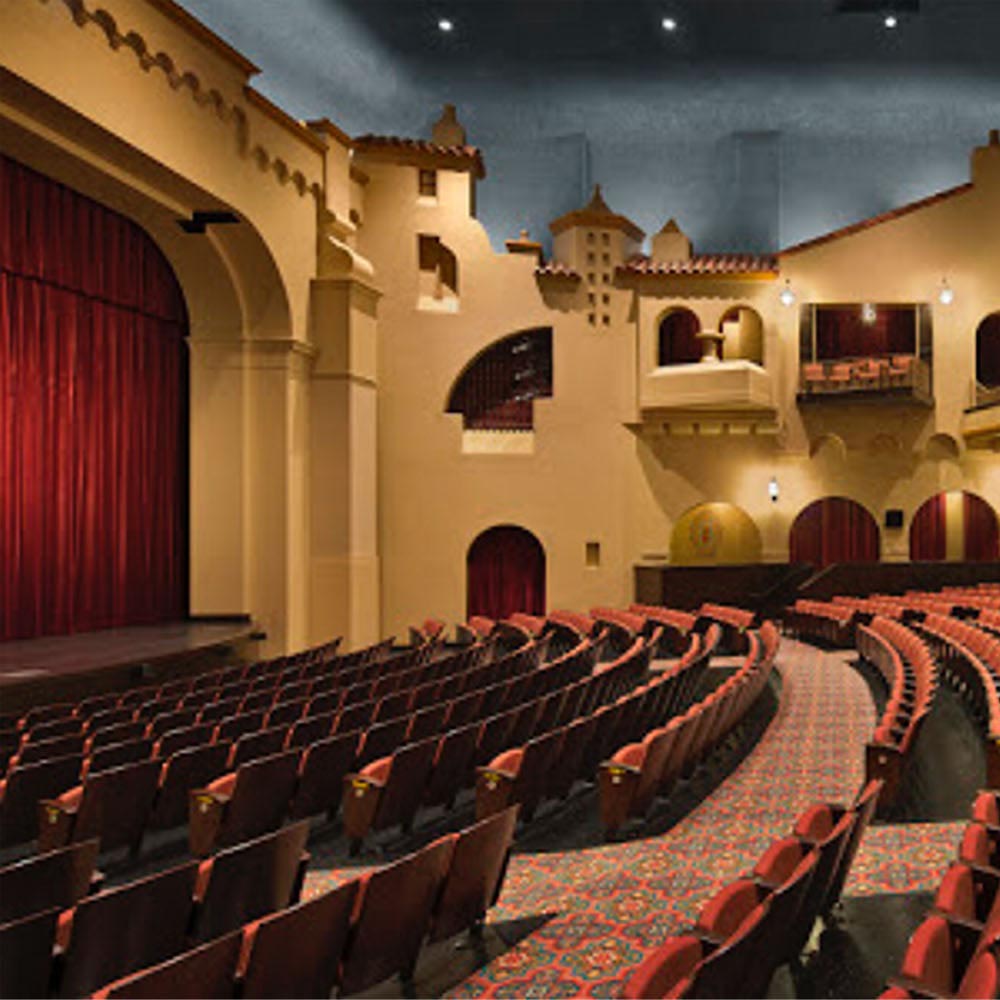 The theatre first opened as the Elite Theatre in 1914. Over the years it was renamed the Strand Theatre and later the Rio Theatre. By 1926 it was operated by T&D Jr. Enterprises as the Merced Theatre. 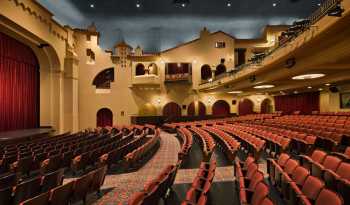 In 1930 the Golden State Theatre Corporation, a major theatre operating chain in northern California, employed San Francisco-based architects Reid Brothers to remodel the theatre. The auditorium got an Atmospheric makeover with a Spanish courtyard theme, and the theatre reopened after its $380,000 makeover in late October 1931 with a seating capacity of 1,645. The opening movie was Local Boy Makes Good

The most prominent feature of the theatre is its 100 foot (30m) high tower above the marquee and main entrance. The tower displays the city’s name in orange block letters and can be seen from miles away. Inside, to this day, the lobby retains its mural of Spanish exploration executed by Dutch-born artist and renowned Southern California interior decorator Anthony Heinsbergen.

The remodeled theatre was one of the first buildings in Merced to feature an air cooling system. A loft located on the castle façade at the house right of the stage supported a grand piano instead of the usual organ; from here the pianist accompanied the stage production, and sometimes also accompanied film presentations. The castle façades, including the piano loft, were removed during the 1978 remodel (see below).

The stage is 25 feet deep by 80 feet wide (7.6m by 24.3m), with a proscenium 45 feet (13.7m) wide. The dimensions are uncharacteristically large for a movie theatre built in the early 1930s – when vaudeville was already waning – and may hark back to the earlier incarnation of the theatre when vaudeville acts would have been presented. The stage was fronted by an orchestra pit which was later covered over.

For a time the Merced Theatre was part of the United Artists chain of theatres. Around July 1979 the theatre reopened in a new configuration with the main auditorium divided into four smaller movie theatres, cutting off the entire balcony section and splitting both the balcony and main floor into two. Atmospheric details in the auditorium were lost along with original paneling and light fixtures on the balcony soffit. The major remodeling cost a reported $450,000 and appears to have taken about a year, from July 1978 to July 1979, however information is sketchy.

During a screening of Dumb and Dumber

on the evening of 24th December 1994, part of the ceiling in one of the lower theatres collapsed. Approximately 55 people were evacuated, although many had already started to leave the building when they heard noises from the ceiling. There were no injuries and there was no structural damage.

on a $3 million renovation project.

The Merced Theatre, now seating 1,185, is leased from the city by the Merced Theatre Foundation who manage and operate the theatre. It is a vibrant entertainment venue in the heart of Merced.

Photos of the Merced Theatre