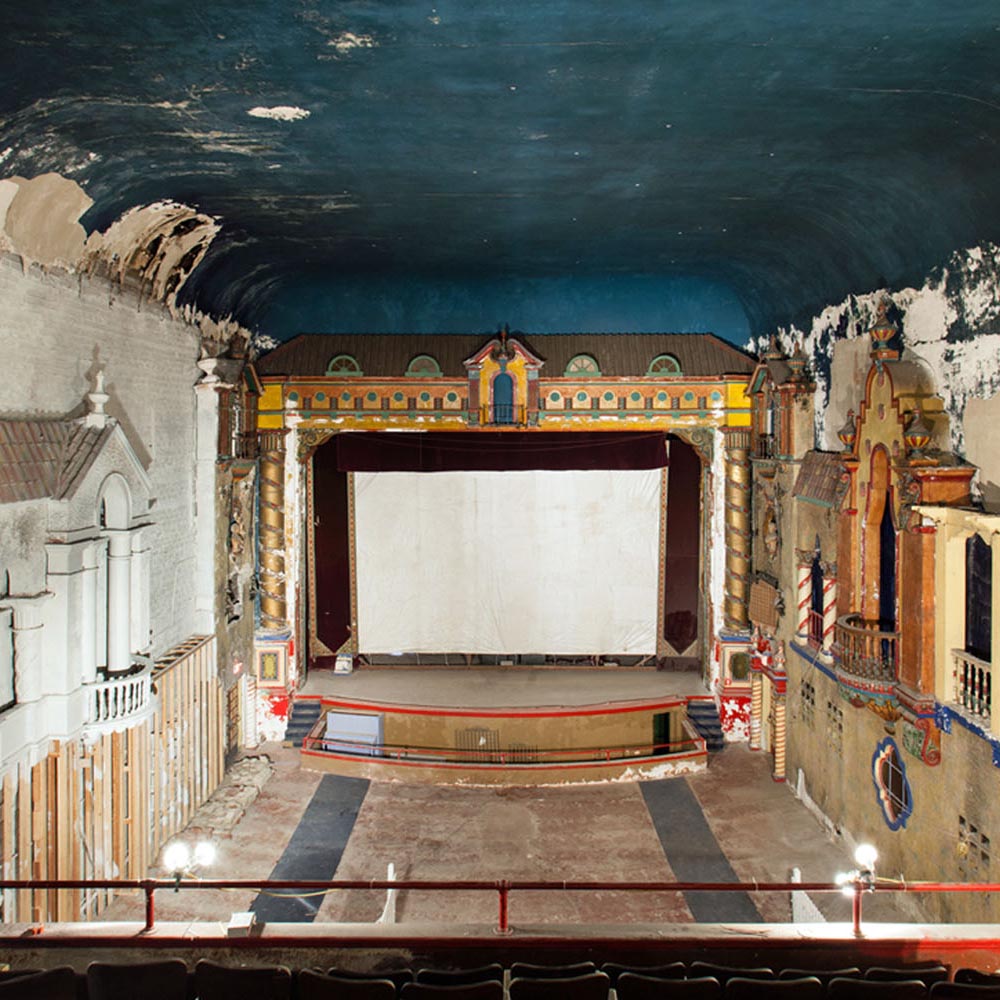 The Russell Theatre was built by local businessman Col. J.B. Russell who, in 1929, envisioned a new kind of theatre for the relatively small town. The theatre was designed by Lexington-based architectural firm Frankel and Curtis, construction was planned at $125,000 but ballooned to $200,000, and the Russell Theatre would come to be the first purpose-built theatre in Maysville. 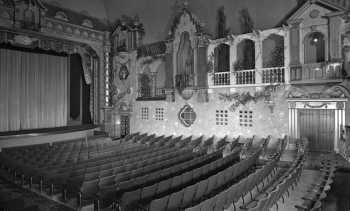 Although only a 700-seat theatre, Russell decreed that “What the Roxy is to New York, the Russell will be to Maysville”. Russell wanted his luxurious theatre to transport its patrons to a world of escape.

The exterior is of a Spanish-Moorish design featuring towers at either end of the façade. Terracotta tiles are a predominant feature, having originally been supplied by Rockwood who have been manufacturing tiles in Ohio since 1880.

The theatre interior was designed by Columbus-based Ralph Clevenger, and in addition to the usual twinkling stars and moving fleecy clouds above its Mediterranean garden setting, the Russell featured a rainbow effect on the auditorium ceiling above the stage when a movie ended.

As was mandated at the time by Kentucky state law, the upper balcony was segregated for use by African Americans with access by separate entrances on either side of the theatre building. The Russell was desegregated in the early 1960s. 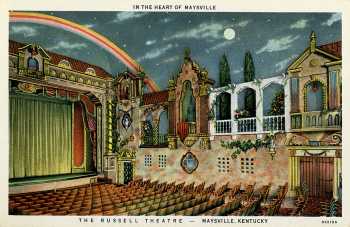 In 1935 the theatre was leased to the Schine Group, who ran the movie theatre successfully as part of the Schine Circuit for many years. Native daughter Rosemary Clooney opened the world premiere of her movie The Stars are Singing

In the early 1970s the Panther Group became managers of the theatre, and in the later years of their tenure the interior was over-painted in bright primary colors.

The theatre ultimately closed as a movie theatre in 1983, and was then used variously as a restaurant, a used furniture store, and a newspaper operation.

Some time after the theatre building became vacant heavy wind and rain ripped off a section of the roof. This allowed a damaged interior gutter to drain into the theatre. Exposed to the elements for a long period, the sodden plaster on portions of the west interior wall collapsed into the auditorium.

In 1995, a group of Maysville citizens began a grassroots fundraising effort to save the Russell, and in just 40 days raised $41,000 through community donations. The theatre was purchased for $37,000, a new rubber roof was installed to protect the theatre from further damage, and a non-profit organization called the Russell Theatre Corporation

was formed with the aim of restoring the theatre to its 1930s glory. 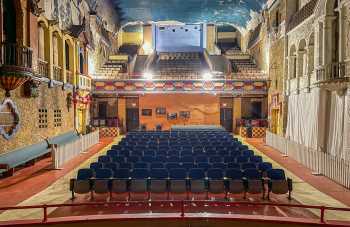 The Russell Theatre in late 2019

from Cincinnati to help with the restoration, and is currently using the restoration plan proposed by KZF in March 2000 to guide efforts as finances allow. The first phase of restoring the marquee was completed in 2002, with restoration of the building façade and lobby having followed. Auditorium seating, previously removed in the early 1980s to help restore another theatre, was reinstated by virtue of a donation in 2019 by the University of Kentucky's Gatton College of Business and Economics

As of 2022, the Russell Theatre Corporation

is currently seeking to raise funds for restoration of the auditorium. The Russell Theatre is poised to once again become the “Heart of downtown Maysville”, where it will serve as the area’s most ornate and elegant venue for feature films.

A fun – and surely unique – feature of the Russell Theatre is that it has been faithfully recreated in miniature. Chicago miniaturists Allison Ashby and Steve Jedd spent over two years creating a 1/12th scale model of the theatre, complete with exterior ticket office and entranceway. The miniature is displayed as part of the KSB Miniatures Collection at the Kentucky Gateway Museum Center

Photos of the Russell Theatre