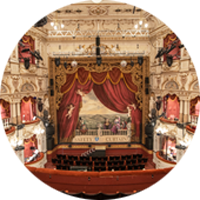 The Lyceum Theatre is the only surviving theatre outside of London designed by noted theatre architect William G.R. Sprague. The current theatre is the third to have been built on the site. Despite having been threatened with demolition in the 1970s and falling into a state of disrepair by the 1980s, the Lyceum was fully refurbished and reopened in December 1990. 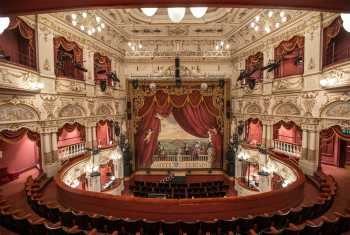 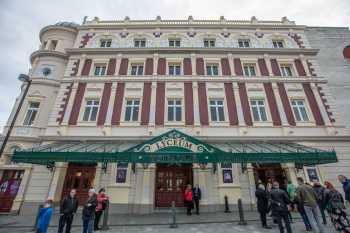 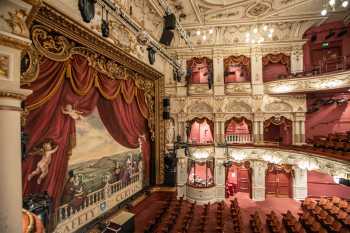 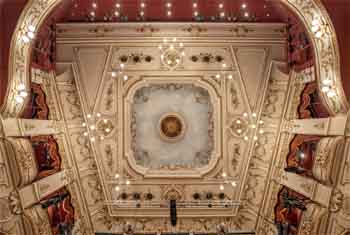 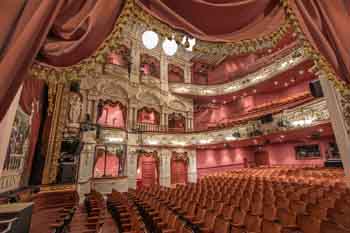 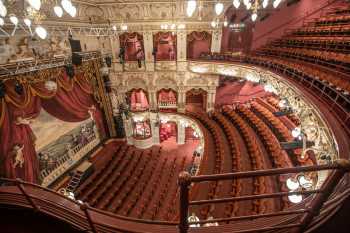 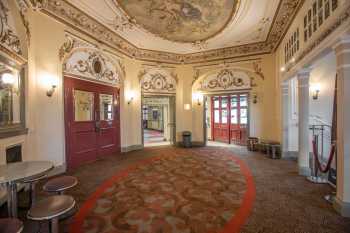 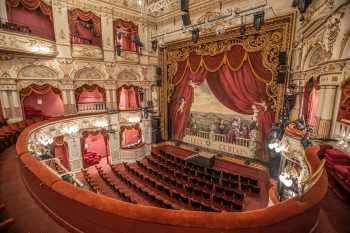 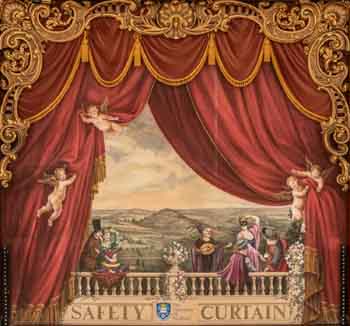 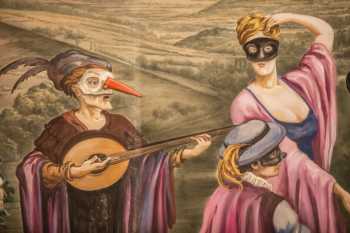 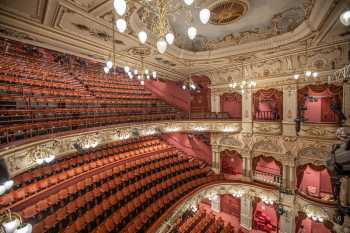 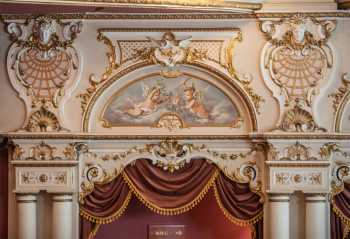 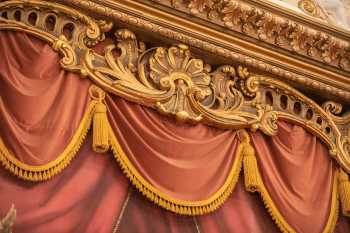 Sprague’s auditorium of 1897, beautifully restored in 1990

Alexander Stacey built Stacey’s Circus on the site in 1879, opening Monday 27th October, and over its short life the ramshackle wood-and-brick circus structure was adapted as a Christian mission, a music hall, and latterly a theatre. Renamed the Grand Varieties Theatre in March 1884, the “theatre” was more like a circus in shape with a semi-circular bank of steeply-raked seats facing the stage. The circus-style theatre ultimately burned-down on 30th May 1893.

The City Theatre, designed by Walter Emden for Stacey, opened on the site of the previous theatre on 26th December 1893. The theatre could hold over 2,500 patrons across Stalls/Orchestra, Dress Circle, Boxes (three per side), and Gallery. The proscenium was 31ft (9.5m) wide by 30ft (9.1m) high. The ERA of 23rd December 1893 reported that “The stage, which is 72ft in width by 34ft in depth, has a grid 50ft high. It has been laid by Mr Kewley, and is replete with the latest improvements”. Special mention was made of the auditorium’s dome which was split into twelve panels each featuring children playing musical instruments. The general building contractor was Messrs G. Longden and Sons of Sheffield, and the auditorium was decorated by Messrs De Jong and Company of London.

Over the course of three years Stacey was unable to make the theatre as successful as he had hoped, and in December 1896 the theatre was purchased by a syndicate intending to make structural alterations and rename it the Lyceum Theatre. Theatre business continued for a short time, albeit under its new Lyceum name, until mid-April 1897 when it closed to be rebuilt to W.G.R. Sprague’s design. 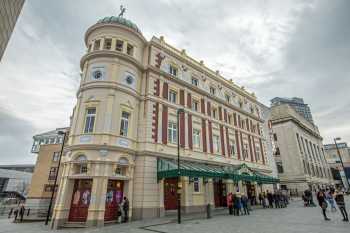 Under Sprague’s plans the stagehouse of the previous theatre was kept however the stage and and the rest of the theatre was rebuilt. The theatre occupied a prominent site and the main entrance at one corner of the building was retained by Sprague. The large copper dome, still extant above the original theatre entrance, was surmounted by a 12ft-high sculpture of Fame poised on one foot and holding a torch aloft (the torch contained an electric lamp). It has also been described as a statue of Mercury, son of Zeus & Maia. The theatre’s remodeled exterior was largely Classical in its design.

Sprague’s redesigned theatre accommodated an audience of up to 3,000 on three levels: Stalls (Orchestra level), Grand and Upper Circle (now just the Circle), and Balcony (originally the Gallery or “Gods”). The auditorium’s original color scheme of predominantly cream with gilded highlights and crimson drapery/carpet persists. The 32ft-wide proscenium arch, painted in gold leaf, is surrounded at its top half by a riotous openwork Rococo plaster valance. 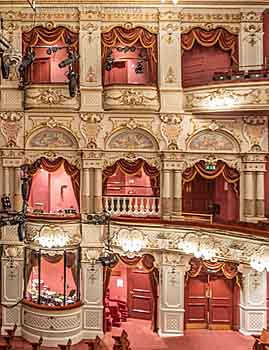 The auditorium sidewalls contain boxes arranged on a grid of three by three, however upon closer inspection we see there are only four private boxes per side. There is a single private box per side at the Stalls/Orchestra level, closest to the stage, excessively bow-shaped. The other bays at this level accommodate an auditorium exit (furthest away from the stage) and access to the private box. At Circle level the three apparent boxes are actually an exit gangway (furthest away from the stage), a standee area, and one private box either side closest to the stage. The decoration surrounding the box bays at Circle level is exquisite: each bay is flanked by decorative pilasters in the iconic order and has a small tympanum above containing a detailed painting. At the Balcony level there are two private boxes per side with the third bay (furthest away from the stage) containing an auditorium exit. Thick rectangular pilasters with decorative rectangular panels separate the box bays at the Stalls and Balcony levels. The Boxes at Balcony level are dedicated to housing technical equipment. 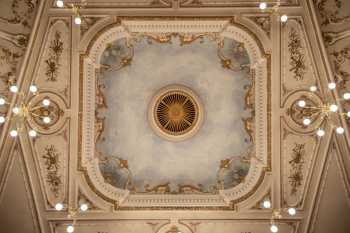 The ceiling is also worthy of note and was initially described as being “a dream of beauty and chaste colouring”. The square dome features a Trompe-l’œil painting of a Renaissance-style sky surrounded by Rococo garlands mirroring the plasterwork throughout the rest of the auditorium. A sunburner is in the center of the rectangular dome however is no longer functional and is purely decorative.

Sprague’s redesigned theatre opened in October 1897 with a production of Bizet’s “Carmen” by the Carl Rosa Opera Company. The theatre was met with universal approval. The Sheffield Weekly Independent reported “There was only one opinion on Monday about the new Lyceum Theatre. It is beautifully decorated, brilliantly lighted, one can hear in it perfectly, and everybody can see the stage”. A week after the theatre’s opening the London Lyceum Company performed “The Merchant of Venice” with Sir Henry Irving and Ellen Terry.

John Hart, the theatre’s manager, was determined to stage productions of quality at his new theatre. Rarely booking music hall (vaudeville) acts, Hart insisted that “refined wit is better than what is known as ‘knockabout comedy’. We shall bring society plays and comedies here and pantomime will be a great feature with us”.

Just two years after its opening, the theatre suffered a serious fire late in the afternoon of 6th November 1899. Quick action by the fire brigade saved the auditorium however the stage was entirely destroyed save for the walls of the stagehouse. The stage crew had set the first scene for the evening’s show, lowered the fire curtain, and left the theatre for their tea break. The Sheffield Independent records that the “asbestos ‘fire-proof’ curtain appears to have fallen away very speedily, and thus to have been quite useless as a means of shutting off the fire from the auditorium automatically”. The Independent went on to note that “the stage was fitted up with ‘sprinklers’, a mechanical device which is supposed to let a flood of water down whenever a certain temperature is reached. [...] This must have completely failed to act, as the course of the fire from the very outset was triumphantly progressive”. Sprague’s auditorium was not damaged however much of the stage area had to be rebuilt. The cause of the fire remains unknown.

For many years the Lyceum was operated by the same management team as the Grand Theatre in Leeds with productions booked through Howard & Wyndham. The Lyceum was one of Sheffield’s major theatres well into the 20th century, and its spectacular pantomimes (usually running from Christmas Eve until the second or third week of March) generally kept the theatre afloat for the rest of the year.

In the early 1960s the theatre closed during the summer months due to lack of shows. Movie screenings were explored however the cost of fitting-out the theatre for film was considered prohibitive. In May 1966 the theatre entered into an arrangement with the Star Group of Leeds to run Star Bingo during the summer months and live theatre outside of that. The arrangement continued for three years, however in March 1969 the theatre became a full-time Bingo Hall. By 1972 even bingo was not successful and the theatre permanently closed. Concern for the theatre’s future resulted in it being listed with Grade II status by English Heritage in late 1972.

In 1975 the owners applied for consent to demolish the building. The application was refused, and again on appeal, and the building was put up for sale but attracted no interest. Ownership transferred to the City of Sheffield, and in the same year the Lyceum Theatre Trust was formed with the goal of reopening the theatre. However the City of Sheffield’s focus was on the recently-opened Crucible Theatre (opened 1971 on the site of the Theatre Royal immediately across the street from the Lyceum), and their ambivalence towards the Lyceum’s plight contributed to the trust’s lack of progress during the latter part of the 1970s. 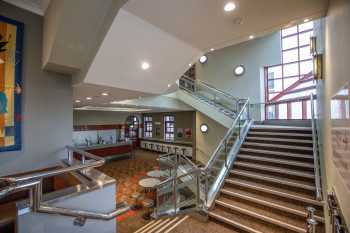 Lobby/Front of House areas dating from 1990

The Lyceum was sometimes used to paint and/or construct scenery for The Crucible and was kept reasonably wind and watertight. In 1981 new owners of the theatre were given permission to stage pop concerts but the plans never came to fruition.

In the late 1980s the World Student Games were allocated to Sheffield and an ambitious plan was put forward to create a civic square beside the theatre. The restored and improved area would be called “Theatre Square” and included plans which called for the theatre to be fully restored and reactivated.

Restoration got underway in 1988 and the theatre reopened in December 1990 with the entrance reconfigured to be from the long elevation fronting Theatre Square, as opposed to the original entrance under the theatre’s corner dome. Most of the Front-of-House areas were modernized however the original stepped entrance vestibule and circular lobby were restored to their original 1897 Louis XIV design, along with a function room originally called the Hepworth room and renamed the MacDonald Room (for local businessmen and passionate supporter of the theatre Neil MacDonald) at Circle level. Other Front-of-House areas were completely re-worked and expanded in a late-1980’s Deco-inspired style.

The stagehouse was completely demolished and rebuilt to modern standards including new Back-of-House facilities in the form of dressing rooms and a large rehearsal room. The architects for the redevelopment project were RHWL Partnerships. Ove Arup & Partners served as the building engineers with the on-site contractor being Bovis Construction Ltd.

As part of the auditorium renovation the theatre’s safety (fire) curtain was repainted with a Renaissance design by renowned UK theatre interior designer/decorator Clare Ferraby, complementing Sprague’s riotous plasterwork and drapery surrounding the proscenium arch. The view seen in the repainted fire curtain is said to be the 19th century view looking out over the countryside from the prominent site the theatre was originally built upon. 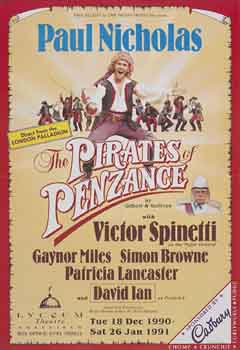 The theatre’s reopening in December 1990 was marked by three gala performances: opening night, Monday 10th December 1990, was a concert evening by the D’Oyly Carte Opera Company. A variety evening followed on the Wednesday, compered by Keith Barron and featuring Bob Monkhouse, then four leading local societies performed on the Friday.

In 2014 the theatre underwent a £1.93 million nine-week refurbishment project concentrating on Front-of-House areas, but also including replacement of the seating in the Balcony, installation of air conditioning, and crucial improvements to backstage areas. The theatre re-opened on Thursday 9th October 2014 with Time Firth’s musical comedy “This Is My Family”.

The Lyceum is the major touring house in Sheffield and is home to the City’s popular annual pantomime.

How do I visit the Lyceum Theatre?

Sheffield Theatres offer backstage tours generally once per month however scheduling is subject to visiting companies and production requirements. Tours start 10am at the Crucible Box Office and run for two hours, with refreshments served after the tour. Tours visit the Crucible, Studio, and Lyceum Theatres (subject to availability) and conclude with a cream tea scone with jam and clotted cream and a pot of tea. Tickets £15. Information correct as of February 2020.

Photos of the Lyceum Theatre