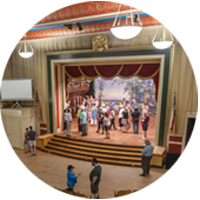 The Scottish Rite Theater is the oldest theatre in Austin, originally erected in 1871 as a German opera house. The theatre is notable for being home to a large number of 100+ year-old painted backdrops by Sosman & Landis, and a fully operable 19th Century wooden “Brown’s Special Counterweighted” flying system.

For the initial forty years of its life the Austin Scottish Rite Theater was a German opera house, having been constructed by German immigrants who wanted to create a public meeting and social gathering place much like they would have found in their homeland. It was known as Turner Hall during this time. 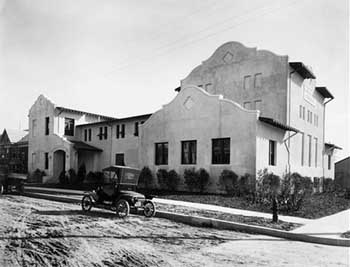 In 1912 a number of Shriners formed an organization called the Ben Hur Temple Holding Association, created for the purpose of buying the building. Capital stock amounting to $15,000 was issued and the Association purchased the building, and from April 1912 onwards it was to be known as the Shriner’s Temple or the Ben Hur Temple. When not in use by the Shriners or Scottish Rite Masons, the building was to be rented to the general public for social events, shows, and exhibitions.

In February 1914 the capital stock of the corporation was increased from $15,000 to $40,020, and the name was changed to the Scottish Rite Holding Association. Thus the Scottish Rite Bodies held ownership of the building and Ben Hur Temple became the tenant.

Once capital became available for improvements in May 1914, Herbert Miller Greene, member of the Dallas Scottish Rite and a partner at Hubbell & Greene Architects of Dallas, prepared expansion and remodeling plans. Major changes were made to the stage and auditorium, most noticeably the removal of the auditorium side galleries and balcony to allow for the creation of a much larger balcony. At the time, degrees of the Scottish Rite were generally presented as one-act plays – stage presentations – designed to afford insight into, and stimulate intellectual debate on, the degree’s subject. It was quite usual for Scottish Rite Lodges to have fully-equipped stages for the often elaborate stage presentations, and Greene’s plans included upgrades to facilitate the most elaborate of productions. 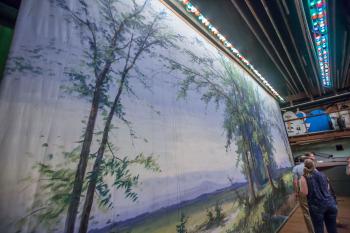 M.C. Lilley & Co of Columbus, OH, were contracted to provide around $12,000 of theatrical resources for the Masons’ new theatre, and they subcontracted the supply of painted backdrops, props, and stage machinery to Sosman & Landis, a Chicago-based scenic art company. Sosman & Landis specialized in backdrops for Masonic theatre in the late 19th and early 20th Centuries. Their works went into Scottish Rite theatres in cities such as Santa Fe, Guthrie, Pasadena, and Dallas. Some of the backdrops destined for Austin were created in the 1880s having been previously used at the Indian Territory Temple in Guthrie, OK.

The theatre’s wooden grid was strengthened and a fly floor installed 12ft above the stage floor on Stage Right. The existing three levels of backstage catwalks were repaired for safety and improved access. The “Thunder Chute”, or “Thunder Run”, was also installed: “constructed of heavy wooden planks, the tilted chute was loaded with bowling balls – some say cannon balls – so as to roll slowly along the length of the building simulating rolling thunder, even hoof-beats”.

The auditorium’s ceiling was painted to resemble the night sky, with recessed lights faithfully reproducing star constellations. The Sun and Moon also featured, with the Moon said to be “adjustable”, although more details on what that means have not been found. 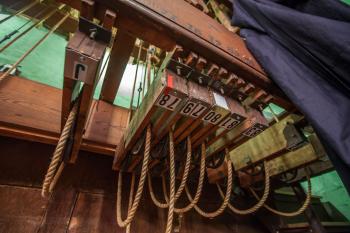 The “Brown’s Special Counterweighted” system installed at the Austin Scottish Rite Theater is a cabled-guided counterweight flying system featuring wooden arbors (cradles) on four-inch spacings, operated from below on the stage floor or from the fly floor. The system has no rope locks because loads were precisely balanced and did not change, and there was enough inefficiency in the mechanics of the system that friction prevented the balanced linesets from moving of their own accord. The “Brown” moniker has been generally attributed to M.C. Lilley’s salesman of the time, Bestor G. Brown, however following investigations by Wendy Waszut-Barrett

In early 1915 a $2,500 2-manual 20-rank Möller pipe organ was installed. It was removed many years later and research has been unable to trace any further details of it.

It was noted that the Spring 1916 reunion marked the most effective use of scenery and lights in the degree work of the Austin Scottish Rite Bodies. Approximately $15,000 had been invested for “some ninety drops”, “some 1,000 lamps...of four different colors, with a large switchboard and dimmers”, accessories, and wardrobes. 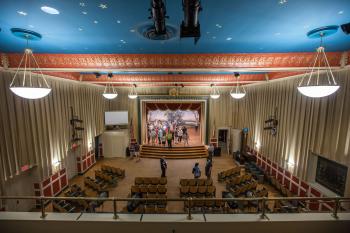 Until the 21st Century the theatre rarely hosted public performances, however the Masons treasured the building and its heritage and, to this day, remain watchful tenants of the building.

In 2004 the Masons created a non-profit theatre organization, dedicated to building community through the arts. The organization provides quality shows for all ages with enriching programming for children.

For almost 150 years, innumerable artists and events of all kinds have graced the Scottish Rite Theater’s stage, from the operas and circus trapeze acts that wowed crowds during the 19th Century to the live world music and multimedia children’s programming that delight the citizens of Austin today.

As of June 2018 the theatre still houses an original prompter station and its Thunder Run, although both are rarely used.

The theatre’s main floor and balcony accommodate approximately 300 in a seated theatre configuration.

How do I visit the Austin Scottish Rite Theater?

As of mid-2018 the Scottish Rite Theater does not offer regularly-scheduled tours, however they welcome visitors to come and view the historic theatre and century-old painted backdrops by making arrangements by email with rental@scottishritetheater.org