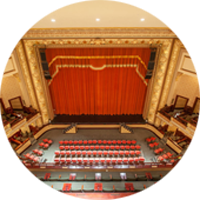 Originally opened as Turner Hall, the space now occupied by the Charline McCombs Empire Theatre has been associated with the arts since 1879. The current theatre, the second to have been built on the site, was built by developer Thomas Brady and opened in 1914. 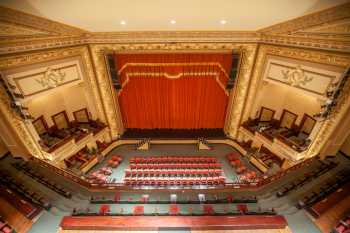 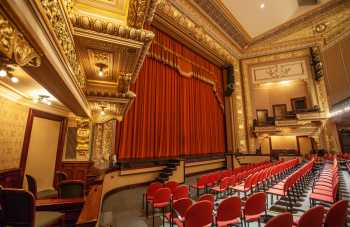 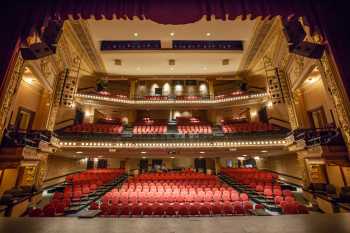 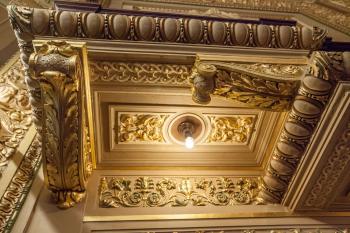 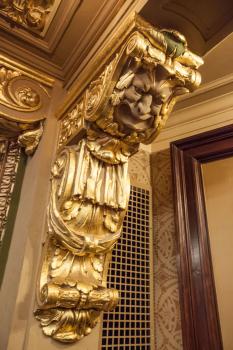 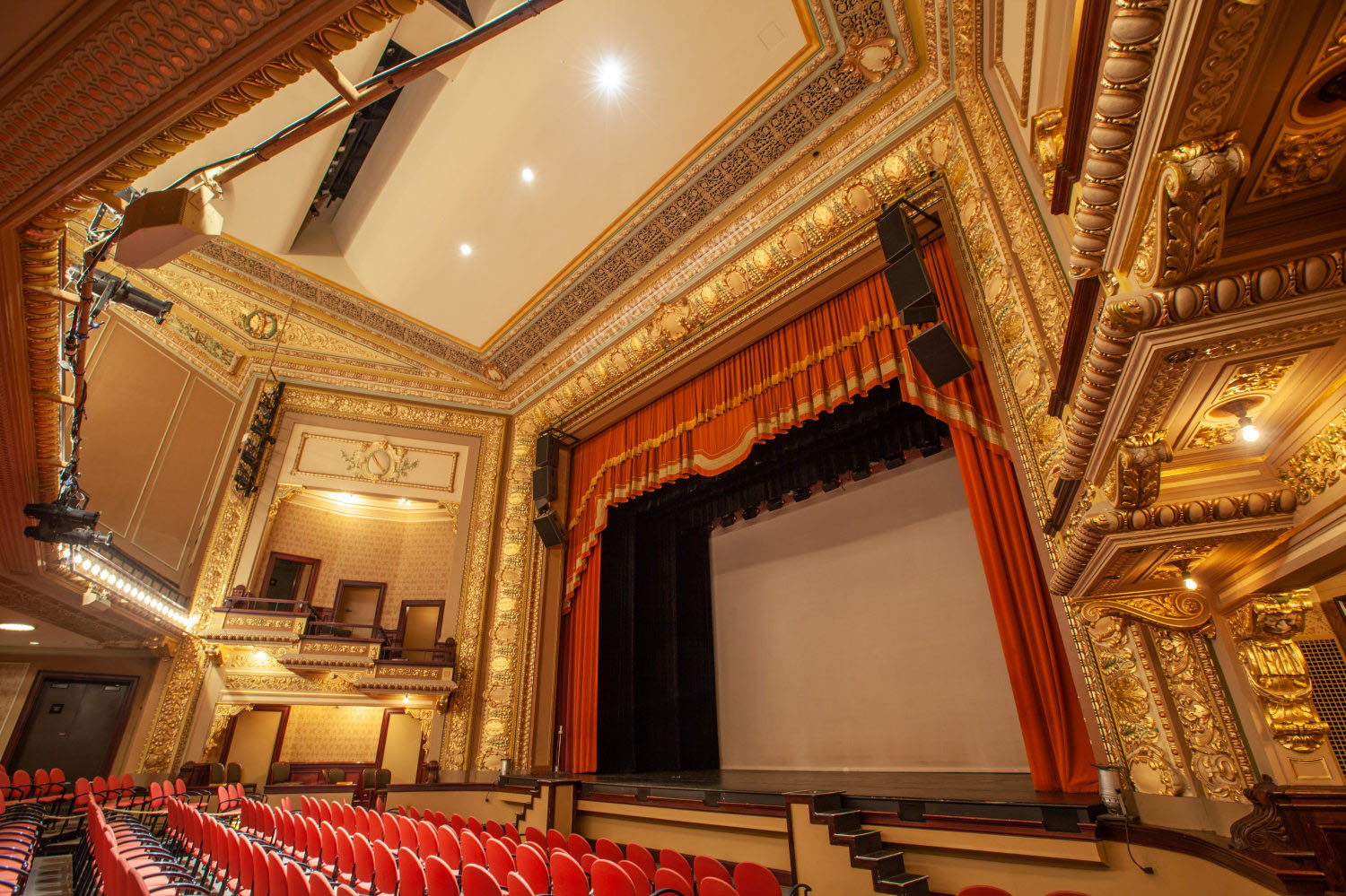 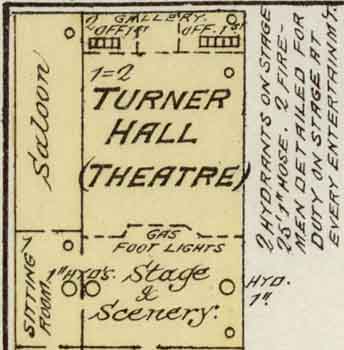 Turner Hall, 1885
In 1850 the Turnverein Association purchased land on the southeast corner of East Houston and North St Mary’s streets to build an exclusive gymnastic club and entertainment center. The first performance to take place in Turner Hall was presented by the San Antonio Literary Association on 8th August 1879. The theatre was oriented 90 degrees to its current location with entry from East Houston St.
In later years the Turnverein Association leased the theatre, and by 1885 it was called the Turner Opera House, then in late 1890 renamed Rische’s Opera House when it came under the management of E.L. Rische, noted in historical city records to have managed the Grand Opera House in 1887. During the 1890s, exact dates unknown, the theatre was also called the Houston Street Theatre and the Alhambra Theatre.
San Antonio capitalist and developer Thomas Brady had bought the theatre from the Turnverein Association in 1890 for $56,000, keeping the lease arrangement in place that the Turnverein Association had started in the mid-1880s. In 1900 he renovated the theatre and reopened it in September of that year as a family/community theatre, managed by his brother James Brady, called the Empire Opera House. With some further tweaks in 1901 to “assure that there will be no neater little playhouse in the state” it was renamed the Empire Theater and carried-on family entertainment for over ten years. City directories note that in 1912 the theatre went into receivership. 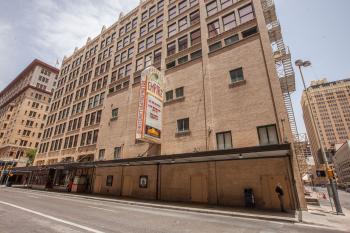 In 1913 Brady engaged St Louis-based architects Mauran, Russell & Crowell to build him a new theatre on the same site but to be enclosed within an eight-story office building (converted to apartments in 1992/3) which would be called the Brady Building.

The new Empire Theatre was built with a European palazzo theme in Renaissance Revival style. Carpets, draperies, and electric fans would be part of the expensive design. Seating capacity was specified at 1,766 with 813 at orchestra level, 603 in the mezzanine, and 350 in the balcony. In addition opera boxes were included at orchestra and mezzanine levels. Outside, over the marquee on North St Mary’s St, a copper sculpted eagle in full flight highlighted the theatre’s entrance on the building’s façade.

Local master plasterer Hannibal Pianta and his crew, likely mostly family members, created the lavish plasterwork throughout the auditorium, in common with several other significant San Antonio buildings. A pipe organ and electric piano were included and demonstrations of them were given at the lavish opening night on 14th December 1914.

The theatre was catastrophically damaged in the San Antonio flood of 1921. Nine feet of water descended onto the theatre ruining much of the interior. Still juggling debt from the building of the theatre, Brady was unable to pay for proper restoration and the theatre’s walls were simply painted over in thick layers of white paint.

Periodical Music Trades reported in late October 1921 that a “Robert-Morton picture organ” had been installed in the theatre. It was a 3-manual 10-rank Style C and the top manual was a dummy. “Competent picture organists” were invited to apply for employment on the 2-manual organ in trade magazines of April 1922. 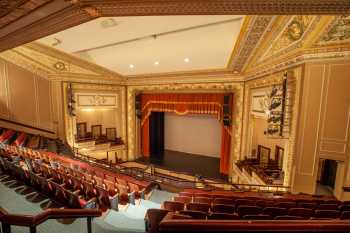 During the Empire’s golden age of the 1920s, many of Hollywood’s biggest stars made personal appearances to promote their new films, including Charlie Chaplin and Lon Chaney. Even during the Depression years, which caused many movie houses to lose business or even shut down, the Empire Theatre boomed, including one week when well over 15,000 people packed the theatre for Mae West’s “Belle of the ’90s”. Among the last major celebrities to appear on the Empire’s stage were Gene Autry, and Roy Rogers with his horse Trigger, to throngs of enthusiastic fans.

In 1928 the Majestic Theatre opened around the corner and set a new standard for theatre interiors. The Empire was redecorated in an attempt to compete, however it struggled against the Majestic’s lure and the proliferation of other downtown movie palaces.

After many years exhibiting movies, B-movies, and Blaxploitation movies the Empire closed in the 1970s. In 1987 the City of San Antonio bought the building, and in 1988 the non-profit organization Las Casas Foundation was created and awarded the master lease in order to lead the restoration of the theatre. Las Casas began raising funds and were able to start the creative process for reviving the Empire back to its former glory.

Over a five year period select areas (the lobby, an opera box at house right, and main entrance surround) were renovated as a preview / interest generator. The eagle, which had originally sat above the entrance canopy, was found covered-up in a Ladies restroom. The eagle was restored and returned to its rightful position on the North St Mary’s St façade.

The mezzanine and balcony fascias featured a total of 160 rosettes, each with an electric lamp at its center. During the renovation these were entirely rewired and the rosettes recreated from just four surviving original examples.

The Empire Theatre was renamed by the City of San Antonio in 1998 as the Charline McCombs Empire Theatre to recognize a $1 million gift by Charline McCombs, local civic leader and philanthropist. After being dark for nearly 25 years, the golden jewel reopened in April 1998 after a restoration project of approximately $5.5 million.

How do I visit the Charline McCombs Empire Theatre?

As of mid-2018 the Charline McCombs Empire Theatre does not offer tours, however you can tour the Empire’s sister theatre, the Majestic. Check out the Majestic Theatre website

for more information and booking.