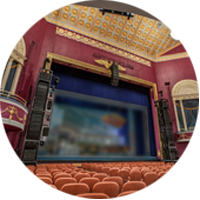 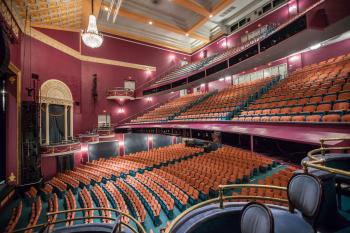 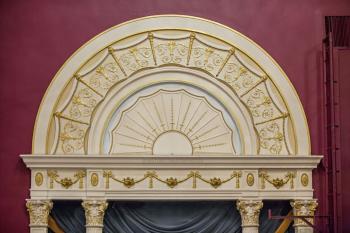 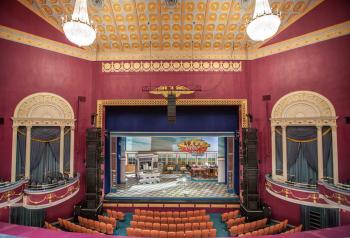 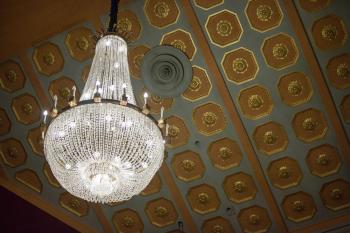 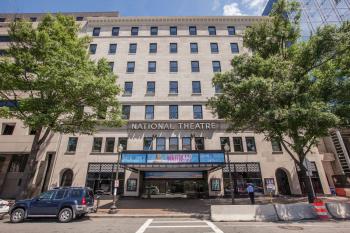 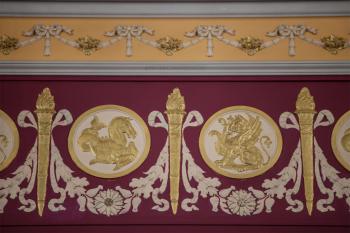 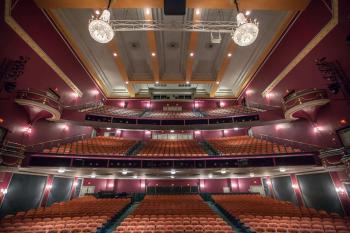 The National Theatre is located just a few blocks east of the White House and is the second oldest continually operating theatre in the United States, having opened in December 1835. The original brick stagehouse and stone foundations still survive, however the auditorium has undergone multiple rebuilds and renovations during its 180-year history.

In 1830s Washington DC, William Corcoran and a group of other prominent citizens petitioned for the nation’s new capitol to have its own first-rate theatre. Subscriptions were sold and a suitable site identified three blocks east of the White House. A notice in the National Intelligencer of August 1834 requested bids for building of the new theatre, laying-out various measurements, terms, and conditional features of the building’s plans. The stage was to be timbered “sufficiently strong to sustain the pressure arising from the introduction of horses”, and the Orchestra seating was to be removable “so that the building may be used as an amphitheatre”.

Building I (1835-1845)
The inaugural production was “Man of the World” which opened on 7th December 1835, with the Acting and Stage Manager being a Mr Thomas Ward (an Englishman born in Liverpool in 1799) “from the Theatre [Royal?] Edinburgh, and Haymarket Theatre, London”. Ward continued to manage the National until 1843 when it changed hands to new managers.

Despite the new owners repairing, repainting, and re-lamping the auditorium, the theatre closed within weeks. A circus season was tried, with the lowest level of seating removed to create a circus ring, but the season was a short one. In March 1845 a fire broke out in the oil room at the rear of the building, and despite the attendance of firefighters, the building burned to a shell and was left derelict for almost five years.

Building II (1850-1857)
By December 1850 the new National Hall was mostly complete, built directly on top of the National Theatre site and utilizing the foundations and remaining standing walls. P.T. Barnum brought Jenny Lind to the new National where she performed to ecstatic packed houses.

In January 1851 the theatre was sold and subsequently remodeled as a European circus. Prior to the first show, a large section of seating collapsed, plummeting over 100 patrons into the basement area below. Miraculously there were no injuries more serious than scrapes and grazes and the opening night show went ahead as planned, however the theatre closed within a week.

In December the theatre reopened under new management, “strongly rebuilt and entirely remodeled”, having reverted to its original name of the National Theatre. It could now seat 3,000 and featured solid iron pillars supporting the balconies. Over the next five years the theatre would have a string of different managers (including the fabulously-named “Fanny Morant” who renamed the theatre in her own honor), until everything came to an abrupt halt in February 1857 when a fire broke out in the upper part of the theatre and completely engulfed the building.

Building III (1862-1873)
In 1858 the devastated property was sold to W.E. Spaulding and William W. Rapley for $35,000. Rapley signaled the end of the continual turnover of actor-managers at the National and would go on to be associated with the theatre until his death in 1902. His son, W.H. Rapley, would later take over as manager.

In April 1862 the New National Theatre was opened, also known as Grover’s National Theatre in honor of manager Leonard Grover. Capacity was reported in the press at around 2,000. A few years later in 1865, John Wilkes Booth played Romeo opposite Miss Avonia Jones’ Juliet.

On 14th April 1865, the day of President Lincoln’s assassination, Lincoln had tickets for the National Theatre, however acquiesced to his wife’s preference of seeing Laura Keene in “Our American Cousin” at Ford’s Theatre. Tad Lincoln, the President’s youngest son, attended the performance of “Aladdin and the Wonderful Lamp” at the National and only heard of his father’s assassination while waiting for his carriage in the lobby of the National.

By 1869 the National, although turning a good profit, was falling into disrepair. In 1870 a concerned citizen sent a letter to the Mayor and City Council outlining various fire hazards at the theatre such as open flame footlights, chairs left in narrow aisles, and flammable scenery. His fears proved to be well founded when, in 1873, fire again destroyed the theatre.

Building IV (1873-1885)
Upon the theatre’s burning, William W. Rapley bought out his partner W.E. Spaulding and set about rebuilding the theatre, despite the harsh economic conditions that prevailed in the city of Washington at the time. When the new building opened in late 1873, much was the same as the previous incarnation. The theatre performed well and established a reputation for musical entertainment, melodramas, and comedies. Successful seasons continued into the 1880s, however in February 1885 another fire took hold and the National was left in ruins for the fourth time in 50 years.

Building V (1885-1922)
Rebuilding of the theatre happened quickly, and by October 1885 the new 1900-seat theatre was ready to open as the New National. A number of significant improvements were made over the previous building: the theatre was lit with electricity, an asbestos fire curtain was installed, seats were larger, a large complement of dressing rooms were provided, and the building was heated by steam.

By the early 1920s, movies started becoming popular and manager W.H. Rapley (son of William W. Rapley) realized his theatre was now inadequate to handle the large shows coming from New York: it was time for the sixth National to make its entrance.

Building VI (1922-Present)
Major parts of his father’s 37-year old theatre were torn-down and completely rebuilt by W.H. Rapley. Once complete, “New” was removed from the theatre’s name, seeing it revert to the National Theatre. Reinforcement of the roof, to accommodate heavy snowfall, was undertaken from the outside so as not to disrupt the interior design, and the iron columns supporting the balconies were removed by adding 30-ton cantilevered steel girders inside the balcony structure to perform the same job, but unobtrusively. The enclosed auditorium boxes were replaced with smaller boxes hung from the auditorium walls. The Orchestra Pit was also extended.

Significant events of the 1920s include the world premiere of “Show Boat” and a screening of Cecil B. DeMille’s “King of Kings” for several weeks in December 1927 (it had premiered earlier that year at Grauman’s Chinese Theatre in Hollywood).

The National was a segregated theatre, meaning African Americans were relegated to separate lower-class entrances and seating only in the topmost gallery, separated from the main audience. By 1873 custom was that blacks were entirely excluded from the theatre, and it wasn’t until the 1930s that the National lifted the policy to admit blacks for select productions. At a production of “Porgy & Bess” in 1936, the cast, led by Todd Duncan, protested the audience’s segregation with Duncan stating he “would never play in a theatre which barred him from purchasing tickets to certain seats because of his race”. The theatre’s management gave in to the demands and allowed for the first integrated performances at the National.

A permanent integration was sought for the theatre in a campaign spearheaded by Helen Hayes, Gilbert V. Hartke, Patrick Hayes, and Richard L. Coe, however it ultimately failed. The campaigners did however manage to persuade the Actors’ Equity Association to decree that no member of the union could play at the National until the discrimination policies were disbanded. Rather than de-segregating, the management at the theatre ceased live performances in 1948 (the final performance was “Oklahoma!” on 31 July) and had the theatre remodeled exclusively for movies by architects John and Drew Eberson, reopening in October 1948 showing “The Red Shoes”.

Following expiration of the lease in 1952, Broadway producers Robert Dowling and Richard Myers gained control of the National and reopened it as an integrated legitimate theatre with a production of “Call Me Madam” starring Ethel Merman. The theatre would go on to be managed for a time by the Nederlander Organization.

The theatre received a bit a makeover in 1956 when the rather “drab” house curtain was replaced with a pale yellow damask pattern to match the refreshed auditorium walls. It was at this time that the theatre’s signature hand-carved eagle was installed above the proscenium, replacing a previous pastoral mural.

In 1974 renovations took place including new seating, a new cerulean blue and gold color scheme for the walls and ceiling of the auditorium, and gilding to highlight architectural features. A new, modular, stage flooring system was installed to replace the existing stage floor, which was in a sorry state having had many traps sunk into it over the years. Most significantly, the nation’s official portrait of Helen Hayes, by Furman Finck, was hung in the second floor lobby.

Washington in the mid-1970s was ripe for redevelopment, however the National managed to cling onto its plot of land – and most of its façade – while a large multi-use complex ascended on three sides taking up the rest of the city block.

Under the New National Theatre Corporation the theatre still under-performed, and in 1979 concerns were raised about Stevens’ management with accusations that he had embezzled funds, and he was ultimately shown the door. Later in 1979 the corporation terminated the Nederlander Organization’s lease and put management of the theatre out to tender. The Nederlander Organization was of course interested in taking back control of the theatre, however their ongoing association with Stevens saw them eliminated from the race at an early stage. Ultimately, the enormous booking power and financial stability of the Shubert Organization won through, and in 1980 they assumed management and programming of the National.

Initiated by concerns over land stability due to building work on several sides of the theatre, the National shut in Spring 1982. An 18-month $6M major restoration was undertaken according to the plans of theatre designer, and now theatre architect, Oliver Smith. New HVAC systems were installed, a five-story backstage building constructed with spacious dressing rooms and a small rehearsal hall, the entrance lobby was expanded to three times its previous size, the auditorium’s electric chandeliers were commissioned, and a new public space was created called the Helen Hayes Gallery by removing offices at the mezzanine level. The National Theatre reopened with a performance of “42nd Street” in January 1984. President Ronald Reagan attended with his wife and saluted the refurbished “neighborhood theatre” in a speech delivered from the stage. Having undertaken perhaps more than it had originally bargained for, the National Theatre Corporation dropped “New” from its name.

In 2012 Chicago-based Jam Theatricals assumed management and programming of the theatre, expanding the National’s operations to include concerts, lectures, opera, ballet, seminars, and receptions, and introducing a new subscription series called “Broadway at the National”. In addition to the world premieres of If/Then and Mean Girls, recent theatrical presentations include Blithe Spirit starring Angela Lansbury, Jersey Boys, Les Misérables and the D.C. premieres of Motown the Musical, American Idiot, Fun Home, Something Rotten!, Waitress, and Newsies. The pre-Broadway world premiere of the new musical Beetlejuice is slated for October 2018. In addition, the National has recently presented many special events and concerts, including Kacey Musgraves, Dave Koz, Bryan Adams, Bill Burr, Eddie Izzard, Savion Glover, The Irish Tenors, and ThePianoGuys.

The National has long been known as one of the leading pre-Broadway venues, with Show Boat, Hello Dolly!, and West Side Story among the many shows that hit the National stage prior to New York. Tradition sees productions paint a show poster backstage on the stagehouse walls, signed by many of the cast. The National was a “hemp house”, using ropes and sandbags to manually move scenery, until September 2017 when a counterweight flying system was installed.

How do I visit the National Theatre?

As of mid-2018 the National does not offer tours, so check the theatre’s website

for a calendar of events and online booking.

Photos of the National Theatre