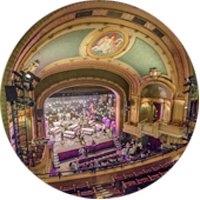 The Paramount Theatre opened in October 1915 as the Majestic Theatre, designed as a vaudeville house. It was one of the early theatre designs by noted Chicago theatre architect John Eberson, who would go on to become most associated with his concept of “atmospheric” theatres throughout the United States. Eberson designed over 1,200 theatres however only around 25 survive to this day. 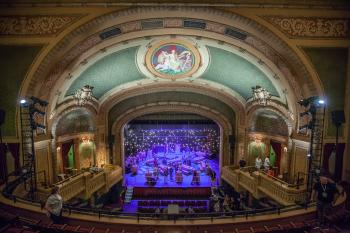 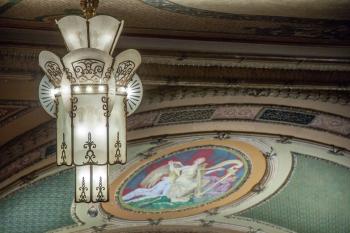 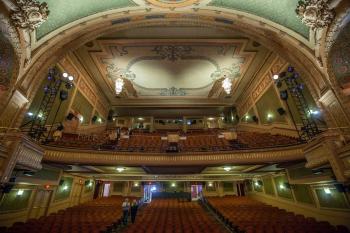 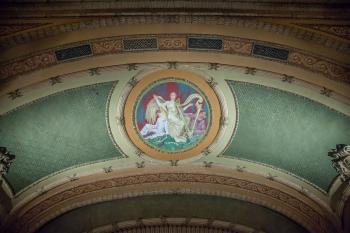 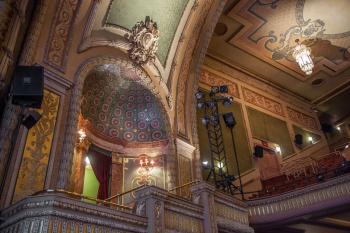 The Paramount was built by Ernest Nalle, son of John Nalle who served as Austin’s Mayor from 1887 to 1889. Ernest dedicated the theatre to his father, and his father’s name is inscribed above the central window of the theatre’s façade.

Construction was completed in just eight months at a cost of $150,000, and the theatre accommodated 1,316 patrons at the time of opening. The auditorium was designed in Classical Revival style on two levels. The theatre’s current outer lobby was originally an outdoor breezeway with central box office / ticket booth and vendors on either side.

On the vaudeville circuit of 1921 you would get a local orchestra of seven instruments (Piano, Violin, Cornet, Trombone, Drums, Clarionette, Organ) under the control of conductor Mrs. C.E. Mick. The organ was an Estey Pipe Organ opus 1378, according to the Cinema Treasures website

, with the console in the House Left side of the Orchestra Pit. The Orchestra Pit was, and still is, just 21 inches lower than the main House floor level.

In a bid to compete with new and upcoming movie theatres, in 1929 the Interstate Theatre Circuit updated the theatre with a Baroque Revival refresh. Upholstered seats replaced wooden benches; a state-of-the-art sound system and air conditioning was installed, and the auditorium boxes were removed as the sightlines were considered poor for viewing movies. Around this time the mural of St Cecilia, patron saint of musicians, artists, and thieves, was painted in the central medallion of the proscenium’s sounding board. The theatre had essentially converted into a grand movie palace and started showing silent movies accompanied by a live orchestra or by the theatre’s organ.

During the 1929 renovation the outdoor breezeway area was enclosed, concession bars replaced the vendor areas, and wall-to-wall carpeting replaced the Spanish tile floor. At the same time the inner lobby was updated in Baroque Revival style. Mirrored walls were later added to the inner lobby, which honor major donors and sponsors of the theatre.

Paramount-Publix purchased the theatre in 1930 and changed the name to the Paramount Theatre, starting the theatre’s reign as Austin’s main first-run movie palace. Paramount erected the theatre’s iconic vertical sign in 1930. When the theatre re-opened after renovation, the remodel had cost almost as much as the original building. At the time the Film Daily Yearbook reported the theatre’s capacity as 1,200.

In 1934 the Paramount became the first theatre in Texas to be equipped with “Wide Range”, a new sound technology from Western Electric Sound, and in the same year the theatre’s seating capacity increased to 1,421.

Throughout the 1930s and 1940s the Paramount continued to exhibit first-run films, often combined with live performances or on-stage appearances from stars such as Helen Hayes and Orson Welles.

By the late 1960s the theatre had fallen on hard times and ran as a B-movie house. By the mid 1970s, downtown Austin’s near-weekly murders had turned the area into a ghost town after 5:30pm. Making matters worse, the Paramount’s owners, ABC Interstate Theatres, had given up on repairs, instead waiting out the days until the theatre closed. Already slated to become a Holiday Inn, the Paramount’s fate was all but sealed.

In 1974 John Bernadoni, Charles Eckerman, and Stephen Scott descended on the Paramount, inspired by previous grand ideas to resurrect live performances in historic theatres and determined to rescue the Paramount from demolition. Bernadoni noted in a 2015 interview that a 1970s screening of “A Clockwork Orange” at the Pacifica Theatre in Los Angeles was a specific driver for the revival efforts at the Paramount.

A non-profit organization called The Paramount Theatre for the Performing Arts was established in 1975, enabling a much-needed federal grant to anchor the restoration funding, and paving the way for the theatre’s landmarking on the National Register of Historic Places in 1977.

Bernadoni, Eckerman, and Scott rediscovered the theatre’s original fire curtain in 1974. Having not been lowered in 50 years and thus protected from light and other potentially damaging elements, the 1907 curtain, manufactured in St Louis and depicting a colorful pastoral scene flanked by drapes, was found to be in pristine condition. It is one of the oldest operating fire curtains in the United States.

Following a test performance of Dave Brubeck and Sons on 2nd Feb 1975, the co-founders signed a lease and worked-out a summer film series which has now been running for over forty years.

The last significant restoration of the Paramount took place in 1979-80. A major feature of the restoration was the recreation of the 1920s “opera” boxes, which are now reserved for VIP experiences.

Not long after the theatre’s renovation was completed, the Paramount Theatre took a leap in a new direction with the in-house production of its own traveling shows, including the first national tour ever produced by a regional theatre. Starting with the November 1982 production of “Deathtrap” starring Leslie Nielsen, the theatre developed a series of well-received shows which were cast with esteemed actors, including E. G. Marshall in “Mass Appeal” and Martin Landau in “Dracula”. The Paramount’s biggest onstage success came with “Greater Tuna”, the humorous look at multiple characters from small-town Texas – including a UFOlogist, a used weapons dealer, and DJ’s from local radio station “OKKK”, all played by Jaston Williams and Joe Sears. The play debuted in Austin and premiered at the Paramount shortly after completing its off-Broadway run. Outselling all non-sporting entertainment in town, Tuna’s success led to sequels and a devoted local following.

In the late 1990s merger talks began with the State Theatre just steps up the street from the Paramount. In 2000 the Austin Theatre Alliance

was formed to jointly manage the two venues.

and festivals such as South by Southwest

and the Austin Film Festival

. The theatre is programmed for over 250 performances per year during which time approaching half a million patrons visit the theatre.

The original vertical sign was erected in 1930 when the theatre became a Paramount-Publix theatre. At the time it was described by the Austin American-Statesman as “a huge sign, more than 75 feet high [from the sidewalk], topped with a brilliant sunburst”. In November 1963 the Austin American-Statesman reported that the theatre’s façade, including the sign, was to undergo renovation: “The theater’s familiar vertical sign, something of a Congress Avenue landmark, will be re-lamped and renovated, but its appearance will be kept the same in deference to tradition”. The sign was removed sometime between November 1963 and August 1964, however was mysteriously lost. No architectural drawings or engineering plans of the original sign have ever been found.

In readiness for the theatre’s centennial in 2015, a 47ft-high replica vertical sign was commissioned from Wagner Sign Company in Elyria, Ohio

revealed that the vertical sign was green with a yellow/white border and predominantly red sunburst at the top.

The sign’s 1,386 lamps are now LED with power consumption coming in at under 20 amps, and the sign’s lightweight low-voltage electrical wiring and aluminum construction have resulted in lower loads, both electrically and physically.

Following discovery of footage featuring the original sign in a video of Lyndon B. Johnson’s parade down Congress St in 1962, the sign’s original animation has been replicated to chase and spell out the word “Paramount”, identical to its original 1930s animation. The vertical sign was re-lit on 23rd September 2015.

On the proscenium’s sounding board, just to house left of the central medallion featuring St Cecilia, there is a small hole. This is known as the “Houdini Hole”, having been allegedly created by the great magician’s crew for rope and rigging required for one of Houdini’s tricks. Houdini historians know he only performed two tricks, both escapes, during his eight-day visit to the Paramount in 1916 so it is more likely the hole was created by one of his contemporaries, probably Harry Blackstone who performed at the Paramount on numerous occasions.

The Paramount is a rare example of a fully operational hemp house, with the only counterweight pipes being the four main electrics bars. Dressing Rooms are located under the stage, and tradition has it that visiting companies sign the Dressing Room corridor walls to record their time at the Paramount Theatre. Current seating capacity is 1,273.

How do I visit the Paramount Theatre?

As of mid-2018 the Paramount Theatre does not offer regularly-scheduled tours. Check out the many and varied events running at the Paramount on the theatre’s website

Photos of the Paramount Theatre