Stateside at the Paramount, Austin 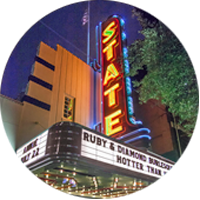 Stateside at the Paramount was opened as the State Theatre in December 1935. It was built by Interstate Theatres and designed by theatre architect W. Scott Dunne, who designed theatres throughout Texas and Oklahoma including the Plaza Theatre (El Paso, TX) and Texas Theatres in Palestine, Sweetwater, Seguin, and Dallas. 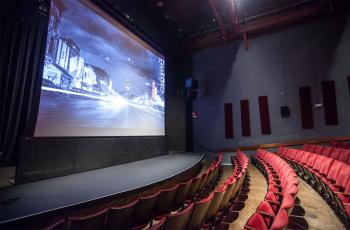 Stateside at the Paramount

The State was the first theatre in Austin specifically designed to screen movies. Other theatres in the downtown area at the time included the Paramount – just a couple of doors down the street; the Queen – across the street; the Capitol on 6th Street; and the Ritz on 6th Street, now the Alamo Drafthouse. Throughout the 1930s and 1940s the State, Paramount, Queen, and Capitol theatres all flourished under the management of Louis Novy on behalf of Interstate Theatres.

Dunne designed the theatre in the Art Deco style popular of the time. Originally there was a retail space separating the State and Paramount theatres, however in later years, likely 1940s, the State theatre’s lobby was expanded into the retail space and the two theatres became direct neighbors.

The State’s seating capacity was reported as 907 by the Film Daily Yearbook in 1941, but by 1950 was given as 997. Today’s capacity is a comfortable 305. The theatre’s balcony has been given over to technical use with its metalwork structure highlighted as a feature of the venue. 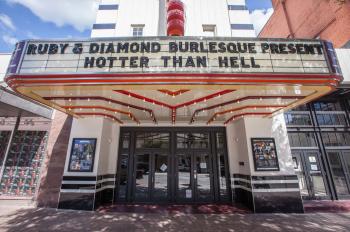 During the 1970s, the State fell on hard times and screened mostly B-movies and adult films. Then in 1986, the City of Austin bought the theatre and leased it to Live Oak Theatre, a local producing theatre company. In 1998, Austin architect Sinclair Black and Live Oak’s director Don Toner embarked on a $3.5M rehabilitation, transforming the interior into an inviting 320-seat space with backstage work areas, dressing rooms, a rehearsal hall, and a new lobby. Six months later, Live Oak finalized its purchase of the theatre, moved into the building, and continued its tradition of presenting quality work and supporting the growth of new plays. Embracing the spirit of its new permanent home, the company changed its name to The State Theatre Company.

In 2000, The State Theatre Company merged with its next-door neighbor, the Paramount Theatre for the Performing Arts, to form the Austin Theatre Alliance. An endeavor that began with two distinct operational and business models has combined the best of both to become one of Austin’s most uniquely productive performing arts resources: a thriving organization that both presents and produces a broad range of drama, comedy, music, dance, and spoken-word events of the highest caliber, in downtown Austin’s most commanding venues. 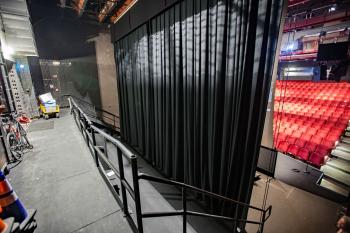 Backstage at the State

In June of 2006, the State Theatre, having just celebrated its 70th anniversary and in the middle of a successful run of the play Bunk Bed Brothers, suffered the effects of a city water main break that resulted in the flooding of the State’s stage and basement, and one-quarter of the auditorium. The massive water leak ruined hundreds of thousands of dollars worth of equipment and forced the cancellation of part of the theatre’s 2006-07 season, aside from events that could be moved to other venues. Complicating matters further was the theatre’s relationship to the Reynolds-Penland building directly north, the basement of which held all backstage facilities for the State. Major upgrades were required to bring backstage spaces up to code.

After approximately $300,000 worth of repairs were completed, the Austin Theatre Alliance was proud to celebrate the grand re-opening of the State Theatre on 1st March 2011, with a private performance by Austin favorite Bob Schneider. The venue is now a popular space for film screenings, live events, podcasts, and is a key venue for the Moontower Comedy Festival

The State’s iconic neon vertical sign was restored and re-lit in October 2013.

How do I visit Stateside at the Paramount?

As of mid-2018, Stateside at the Paramount does not offer regularly-scheduled tours. Check out the many and varied events running there on the theatre’s website

, for which Stateside at the Paramount is a key venue.

Photos of Stateside at the Paramount