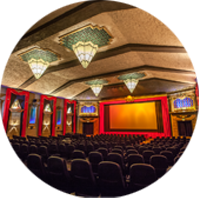 The Vista, a single-screen neighborhood movie theatre, opened on 9th October 1923. Originally called Bard’s Hollywood Theatre, opening night consisted of some vaudeville acts and a screening of “Tips” starring Baby Peggy, who made an in-person appearance in for the sell-out crowd of 900. 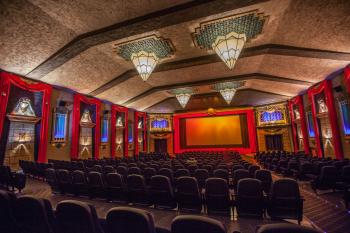 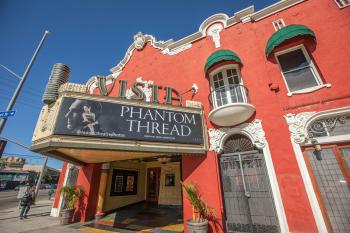 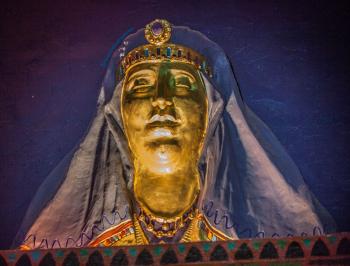 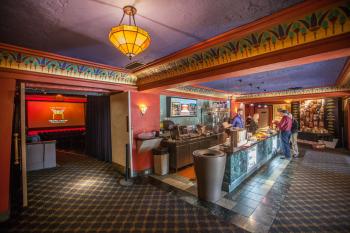 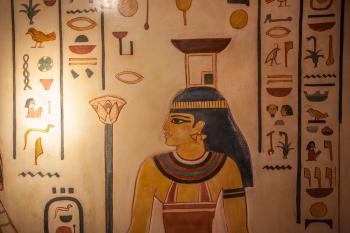 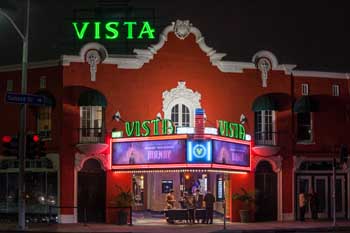 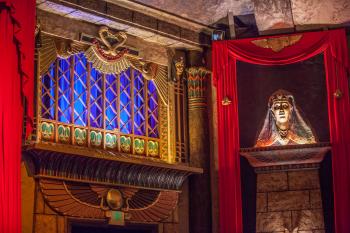 “Where Hollywood and Sunset Boulevards Meet” 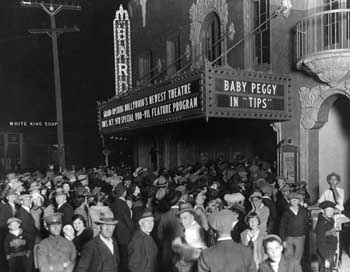 Lou Bard’s movie theatre chain, which built his new Bard’s Hollywood Theatre, would go on to build several other theatres including the 8th St Theatre (later called the Olympic Theatre) in downtown Los Angeles, and Egyptian-themed theatres in West Adams, Glendale, and Pasadena.

The theatre was built as a single-screen neighborhood movie theatre, and although the exterior is designed in Spanish Mission style, Lou Bard loved the Egyptian themes which were all the rage following the discovery of Tutankhamun’s tomb in 1922, and had his architect Lewis A. Smith design an Egyptian interior for the theatre. The highlight was ten eerily-lit life-size pharaonic masks lining the sides of the auditorium.

Although originally opening with vaudeville acts and organ concerts, within a couple of weeks of its opening the theatre settled into a pattern of two features per week, a reduction in vaudeville acts – which were often replaced by an organ concert, until finally just films were screened.

the theatre featured a small Style D Wurlitzer theatre organ (2-manual/6-rank, Opus #701) that was shipped from the Wurlitzer factory in North Tonawanda on 15th September 1923. The organ was later broken up for parts.

The current and spacious seating

Seating capacity was originally quoted as 838 in the 1920s, however for many years the reported capacity was lower, in the range of 600-700. Current capacity is 400, with every second row of seats having been removed to increase legroom.

By 1930 the theatre came under the new management of Fox West Coast which was when the theatre was renamed as the Vista Theatre. The current neon marquee replaced the original 1923 marquee in 1938 at a reported cost of $1,000.

Thomas Theaters sold the theatre to Landmark Theaters in 1982 and it reopened in as a revival house, however by mid-1985 Landmark could not make the Vista’s programming a success with the direct competition from cable TV and video rentals.

Landmark closed the Vista in 1985, it was sold, renamed the New Vista, and went back to screening first-run movies.

Pharaonic masks line the side walls

When Five Star Theatres (now Vintage Cinemas) acquired the property in 1993, the Vista was a dilapidated dive with a checkered past. Lance Alspaugh, head of Five Star, was planning extensive improvements when he was approached by designer Ronald Wright, who proposed a complete and thorough renovation and restoration. The floor-to-ceiling process, costing approximately $1 million and including earthquake retrofitting, started in 1997 and was completed in 2000. By going down to the smallest level of detail it took around a year to restore all of the pharaoh masks lining the auditorium. Vertical seismic retrofit strengthening beams are hidden behind the red curtains adorning the pharaoh masks lining the walls, slightly altering the original shape of the auditorium.

Like Grauman’s Chinese Theatre, the Vista’s forecourt features cement handprints and footprints, however the Vista’s tend toward icons of independent and cult movies.

The theatre is built on the site used for the massive Babylon set from D.W. Griffith’s biggest and most expensive movie: Intolerance (1916)

. This set is the origin of the design used for the outdoor Hollywood & Highland mall.

The theatre temporarily closed in March 2020 as a result of the Covid-19 pandemic. In early July 2021, Variety

reported that Quentin Tarantino had purchased the theatre

and expected to reopen it by December 2021.

How do I visit the Vista Theatre?

for events playing at the Vista - it’s a popular and busy venue, and the manager often dresses-up as a character from the movie currently playing.

Photos of the Vista Theatre