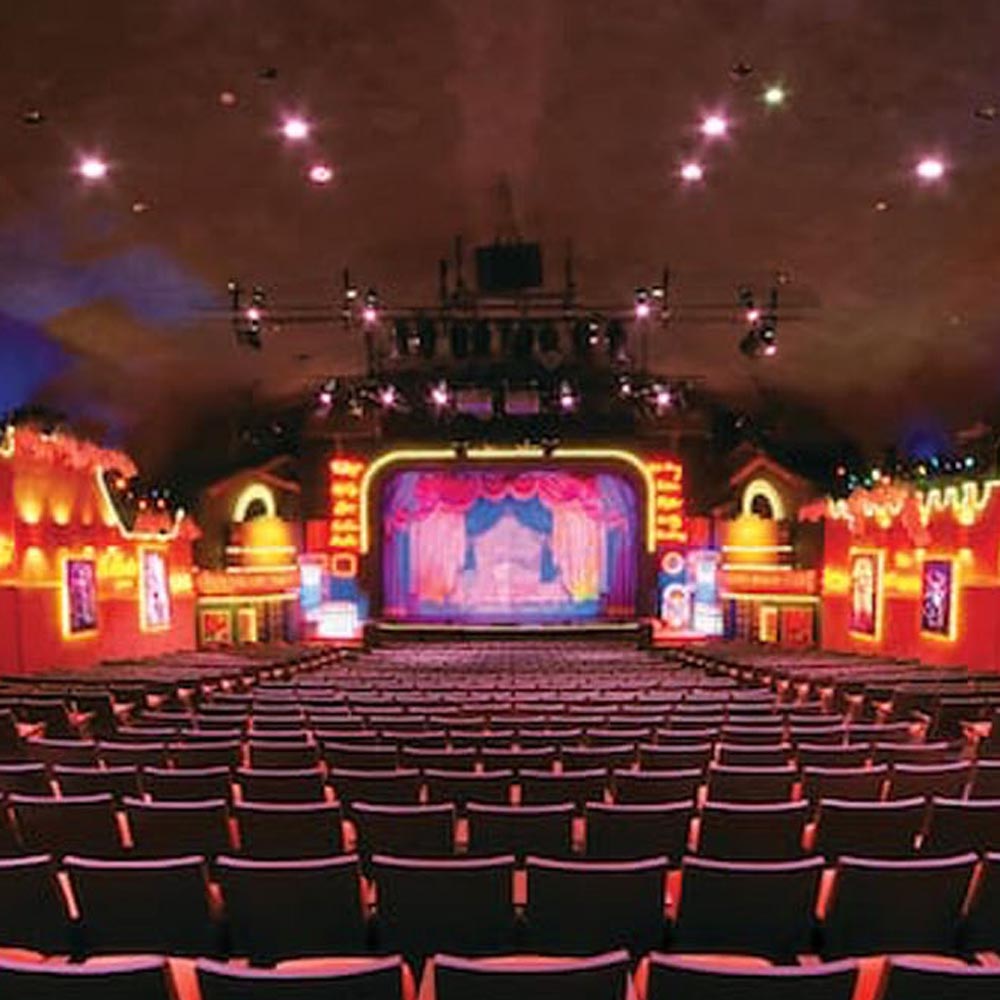 starring Greta Garbo. Built by Julia Carnell, the theatre was designed by architect firm Schenck & Williams in an Atmospheric style with a Spanish village theme.

The auditorium features fanciful village façades carved into the side walls, and twinkling, star-like lights on the vast blue-sky ceiling.

The theatre building features an outdoor “courtyard lobby”, taking advantage of the outdoor open space in front of the theatre and its visibility from the street. The courtyard lobby concept was popular in the mid-1920s in Southern California, and helped create a buzz of excitement as passers-by saw crowds gathering for a performance or screening, however was only practical at theatres in the agreeable Southern California climate. Other theatres featuring courtyard lobbies are the Chinese and Egyptian theatres in Hollywood, the Geffen Playhouse in Los Angeles, the Alex Theatre in Glendale, the Arlington Theatre in Santa Barbara, the Pasadena Playhouse, and the Fox Fullerton in Orange County.

In the early days of Palm Springs, the-then village featured an annual event called the “Desert Circus”, highlighted by an annual show called the “Village Insanities”. Originally performed on the grounds of the Desert Inn, the “Insanities” would later perform at the Plaza Theatre under the name of the “Village Vanities” during the 1940s.

Over the years, the theatre was the venue for memorable performances by the likes of entertainment giants such as Bing Crosby and Frank Sinatra. Performers Jack Benny, Bob Hope, and The Edgar Bergen and Charlie McCarthy Show broadcast radio shows from the Plaza, bringing national attention to Palm Springs. It was also one of the most popular movie theatres in the growing Palm Springs community and was the venue for a number of motion picture premieres, including the musicals My Fair Lady

and The Music Man

By the late 1970s Metropolitan Theatres had assumed operations at the Plaza Theatre. Their removal of the ticket booth in front of the theatre caused outrage in the community and was the catalyst for the formation of the city’s Historic Site Preservation Board in 1981 to identify and recommend to the city council historic sites and neighborhoods worth preserving. The Plaza Theatre was declared a Class 1 Historic Site in 1991; a designation that prohibits any structural changes that do not adhere to the original Depression-era design.

The theatre eventually closed in 1989, however in 1991 the city awarded a lease to Riff Markowitz, a Canadian impresario and Hollywood TV producer. Markowitz and his wife, Mary Jardin, launched a vaudeville-type revue called “The Fabulous Palm Springs Follies” that ran in the theatre for 23 years. “The Follies” was popular with locals, but notably attracted groups from around Southern California and generated stories by the New York Times, CNN, and a range of international media. The long-running show brought international exposure to the theatre and in many ways helped revitalize downtown Palm Springs. The show having run its course, the theatre ultimately closed in May 2014.

that “Frasier” co-creator David C. Lee, a Palm Springs resident, had responded to preservationists’ calls with a $5 million pledge to the Plaza Theatre Restoration Project, launched just before the Covid-19 pandemic. Lee now serves on the Board of Directors of the Plaza Theatre Foundation, a 501(c)(3) non-profit charity organization which aims to renovate and reopen the theatre.

As of 2022, architectural firm Gensler

has been engaged by the City of Palm Springs, along with historic preservation consultants, to formulate a restoration plan. In June 2022, J.R. Roberts, President of the Plaza Theatre Foundation, confirmed that the current goal is to bring the theatre back with respect to its look and feel of 1936, but with state-of-the-art design for a theatre of today, keeping in mind easy access for people with disabilities. The current seating capacity of 800 will be reduced to around 670 with wider seats.

Information in part sourced from Save the Plaza Theatre

Photos of the Plaza Theatre