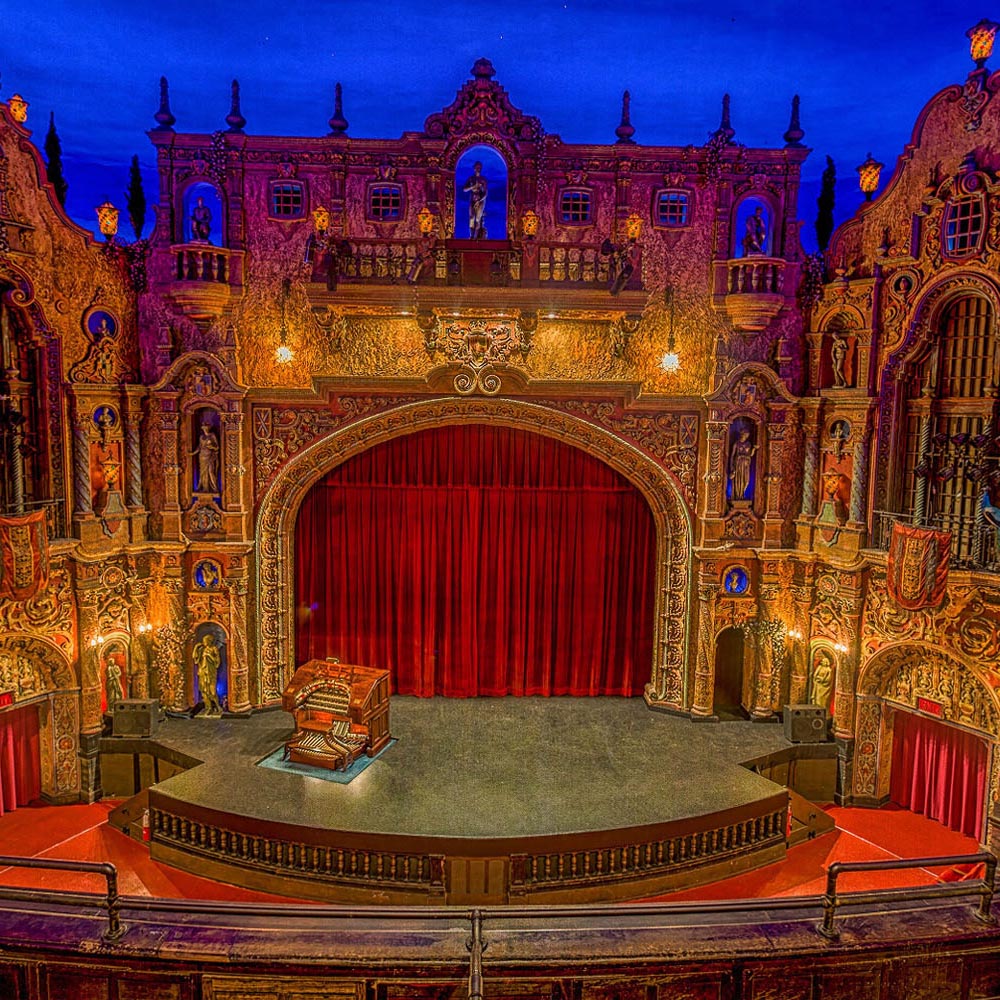 The Tampa Theatre’s interior was designed by noted theatre architect John Eberson and resembles a romantic Mediterranean courtyard replete with old world statuary, flowers, and gargoyles. On the ceiling is an artificial nighttime sky with stars on it. Eberson regarded it at the time as the most beautiful and perfect example of his atmospheric theatre concept.

For decades, the Tampa Theatre remained a jewel at the center of the city’s cultural landscape as generations of patrons stole their first kisses in the balcony, followed the world through the newsreels and grew up coming to the theatre week after week.

In the 1940’s, the Tampa Theatre was operated by Paramount Pictures Inc. through their subsidiary E.J. Sparks.

In 1973 the theatre closed, and with the threat of demolition citizens rallied and committees were formed. City leaders became involved, and soon a deal was reached to have the City of Tampa rescue the theatre by assuming its leases. The Arts Council of Hillsborough County agreed to program and manage the theatre with films, concerts and special events. By the time the theatre reopened in early 1978, the Tampa Theatre had become something of a national model on how to save an endangered theatre.

Since its rescue in 1978, the theatre has welcomed over five million guests including over one million school children for school field trips and summer camps in the context of one of Tampa’s largest historic preservation projects.

The theatre’s marquee was replaced in late 2003, culminating in a lighting ceremony which took place on 16th January 2004.

The theatre houses a Mighty Wurlitzer theatre organ (opus 1429) which is played before nightly films. The organ is played and maintained by a team of volunteer organists from the Central Florida Theatre Organ Society.

In late 2017, the theatre closed for six weeks to complete the first phase of its long term restoration plan, a $6 million renovation that updated the electrical systems, re-seated the auditorium with seats designed to match the original look from 1926, added a new and expanded concessions stand and bar, installed a new emergency power system, and protected the building from storms by installing new storm rated windows and doors on the Florida Avenue side of the building. The seating capacity was reduced from 1,446 to 1,238 to improve comfort and legroom. New carpet, designed to match the original 1926 design, was installed, as well as a new grand drape and valance for the proscenium arch also designed to match the original.

The lobby paint and plaster was restored to its original palette by crews from EverGreene Studios, including the replication of four tapestries to replace the faded and worn tapestries from 1926. The original tapestries were transferred to the Tampa Bay History Center for preservation.

Information in part sourced from Wikipedia

Photos of the Tampa Theatre