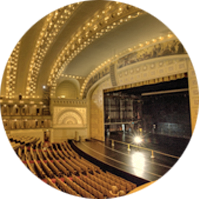 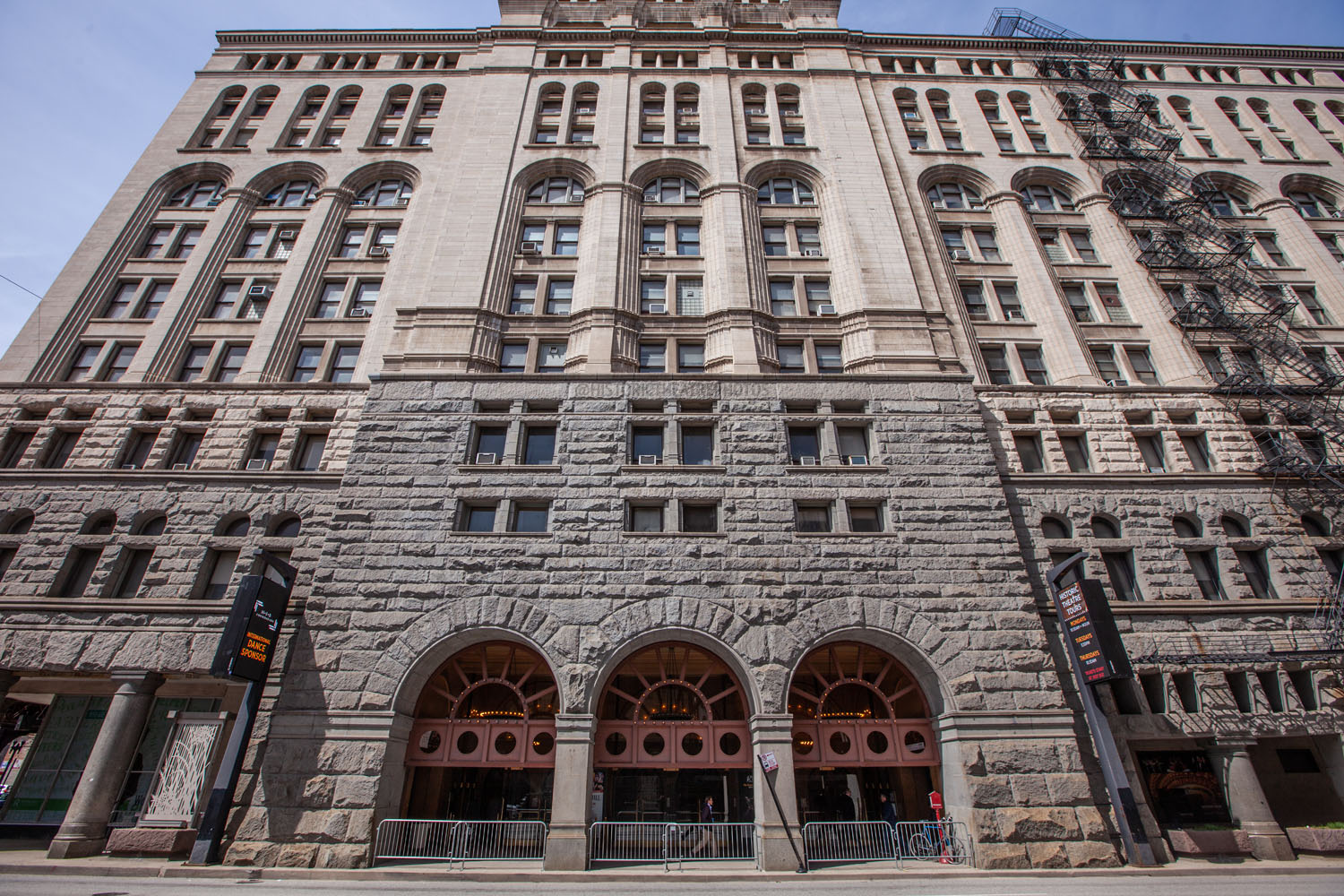 Auditorium from Side Boxes Completed in 1889, the Auditorium Theatre is part of a larger building complex in downtown Chicago called the Auditorium Building. The architects, Dankmar Adler and Louis Sullivan, with young draughtsman Frank Lloyd Wright, incorporated several modern features into the theatre such as air conditioning and 3,500 bare carbon filament lamps adorning the multiple levels of the auditorium.

At the time of its design, philanthropist Ferdinand Wythe Peck envisioned what was perhaps the first mixed-use building in modern times: a theatre, hotel, and offices all in one coordinated building with receipts from the hotel and offices helping to subsidize the theatre.

Peck wanted to replace Chicago’s aging music hall with an opera house to rival anything found in New York. His vision of the Auditorium Theatre being a meeting place for the working man and the well-to-do was carried-over into Adler & Sullivan’s design which saw the expensive box seats moved to the sides at 90 degrees to the stage, affording clear views for the four levels of cheaper seats.

The architectural style of the theatre has been dubbed Richardsonian Romanesque, named for Henry Hobson Richardson (1838-1886), and is a revival style based on French and Spanish Romanesque precedents of the 11th Century. Richardson’s style is characterized by massive rough-cut stone walls and dramatic semicircular arches, deeply recessed windows, and a new dynamism of interior space. Continuity and unity are keynotes of Richardson’s style.

The Auditorium has a ceiling that gradually heightens as it recedes in several arches, a design unprecedented in the late 19th century. It was the first theatre to be shaped like a trumpet.

The 3,500 incandescent bulbs which run along the ceiling arches and the fronts of the balcony and galleries envelope the audience and eliminate the need for a conventional chandelier in the center of a domed ceiling, common feature in most 19th-century opera houses and almost certain to deaden a hall’s acoustics.

Mosaic marble floors flow throughout the theatre. In all, Sullivan used 55 million pieces of mosaic tile. Over the doors at the building’s entrance are six arched art glass lunettes inspired by the allegorical figures of Wisdom, Oratory, Drama, Music, Poetry and Dance.

Once built, the Auditorium Building was Chicago’s tallest with its 17-story tower, and its largest given the footprint of half a city block. Air throughout the building was cooled using up to 15 tons of ice per day. Built upon marshland, the foundations were essentially a raft of steel, wood, concrete, and pitch, and the 110,000 ton building settled about three feet lower than the foundations were originally set, resulting in several steps down from street level to the box office and the slightly listing floor in the theatre’s main lobby.

The hotel fell out of favor as patrons developed a preference for private bathrooms instead of the shared bathrooms offered at the Auditorium Building. In 1904 the Chicago Symphony Orchestra moved-out of the theatre to its own building, and in 1929 the Grand Opera followed suit, leaving the theatre with no permanent tenant. Steel frame skyscrapers soon eclipsed the Auditorium’s stone-built office tower. By the early 1930s estimates for demolition were being requested however they were all more costly than the land was worth. In 1941 the theatre declared bankruptcy and was closed.

During World War II the city commandeered the theatre for use as a servicemen’s center (a USO center) for feeding and entertainment, which included converting part of the theatre into a bowling alley.

In 1946 Roosevelt University acquired the building, and although they used the hotel and office space, theatre remained shuttered. In the early 1960s, Roosevelt University trustee Beatrice Spachner created the Auditorium Theatre Council, raising $3 million to refurbish the theatre in a project overseen by architect Harry Weese. The theatre reopened in 1967 and has remained in use ever since.

The theatre has been home to all manner of events, from classical concerts and ballet to large-scale Broadway productions including “Les Miserables” and “Phantom of the Opera”, and rock concerts featuring artists such as Jimi Hendrix, The Who, Janis Joplin, The Doors, Elton John, The Grateful Dead, and many others.

The theatre as built had a capacity of 4,200. The auditorium is vast, however ingenious devices – part of the original design – allowed the theatre to appear smaller in size when needed: a careful study of the theatre’s side elevation yields movable ceiling panels at the front of the Upper and Lower Galleries which could be lowered to close off those spaces when not required. In addition, curtains were originally fitted to close off the rear sections of the Balcony. The net result was a reduction in seats from 4,200 to 2,500. At its current capacity of 3,901 the theatre is the second largest concert hall in the US, after the Metropolitan Opera House in New York.

There are two murals adorning the side walls of the auditorium, by Albert Fleury, which depict Spring (house right) and Winter (house left), with an allegory by Charles Holloway running (unusually) from right to left along the top of the proscenium arch, intended to suggest the passage of a lifespan through music.

Originally 26 hydraulic lifts were installed under the theatre’s huge 100ft x 63ft stage. Those are now gone however the theatre still has three functioning lifts for varying sizes of Orchestra Pit. The stagehouse had a 95ft-high grid (now 80ft) allowing for the largest of scenic pieces, and all the evidence suggests the theatre was the recipient of the first counterweight flying system throughout all of North America. The theatre was originally furnished with a rolling backdrop cyclorama, consisting of a 300ft long by 70ft high canvas roll arranged in a large half circle. Rarely for a theatre in the US, a Thunder Run was installed in 1899 which is still in existence.

The Auditorium was originally equipped with an organ, “Frank Roosevelt No. 400”, which was a 4 manual, 127 rank (some sources report 129) instrument, featuring imported reeds by French organ builder Aristide Cavaillé-Coll. The organ chambers were located at the sides of the auditorium just in advance of the stage however are now sealed-up. In 1941/2, when the theatre was being converted into a USO center, the organ was sold at auction for $1,000 to William H. Barnes. Barnes initially stored the organ then donated it to Indiana University in 1944; the Aeolian-Skinner Organ Company installed it into the Indiana University Auditorium which is where it has remained to this day.

The Joffrey Ballet has been resident at the Auditorium since 1998 however in late 2017 announced their intention to vacate the Auditorium and move to the Lyric Opera House by 2020. The Auditorium continues to play host to Chicago’s large-scale musicals and live events, and recently enjoyed USA-wide publicity as home of the NFL Drafts in 2015 and 2016.

for its programs and services, its community impact, and the quality of its restoration and rehabilitation work.

How do I visit the Auditorium Theatre?

Tours run Mondays at 10:30am and Noon, Tuesdays at 5:30pm, and Thursdays at 10:30am. Tourst last 60-90 minutes and cost $12 per person. More information, including upcoming days when tours are not running, plus online booking is available on the theatre’s website tour page

. Tickets are also available at the Box Office 30 minutes before each tour unless the tour is already sold-out. Advance booking is recommended. On a practical note: there are quite a few steps on the tour for the more adventurous however the majority of the highlights are 100% accessible. Note: this tour does not generally include backstage access. Information correct as of December 2018.

Photos of the Auditorium Theatre