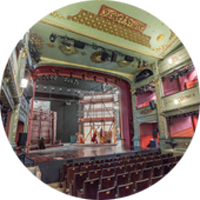 The Bristol Old Vic’s Theatre Royal is the United Kingdom’s oldest continuously operating theatre, having opened its doors in May 1766. At the time of opening it did not possess the royal patent required for the public performance of plays, so productions were disguised as concerts and the theatre’s entrance was not directly accessible from the street to minimize unwanted attention. 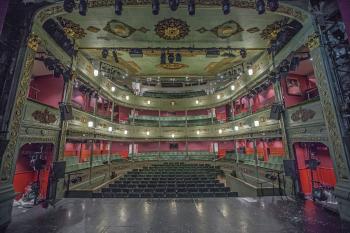 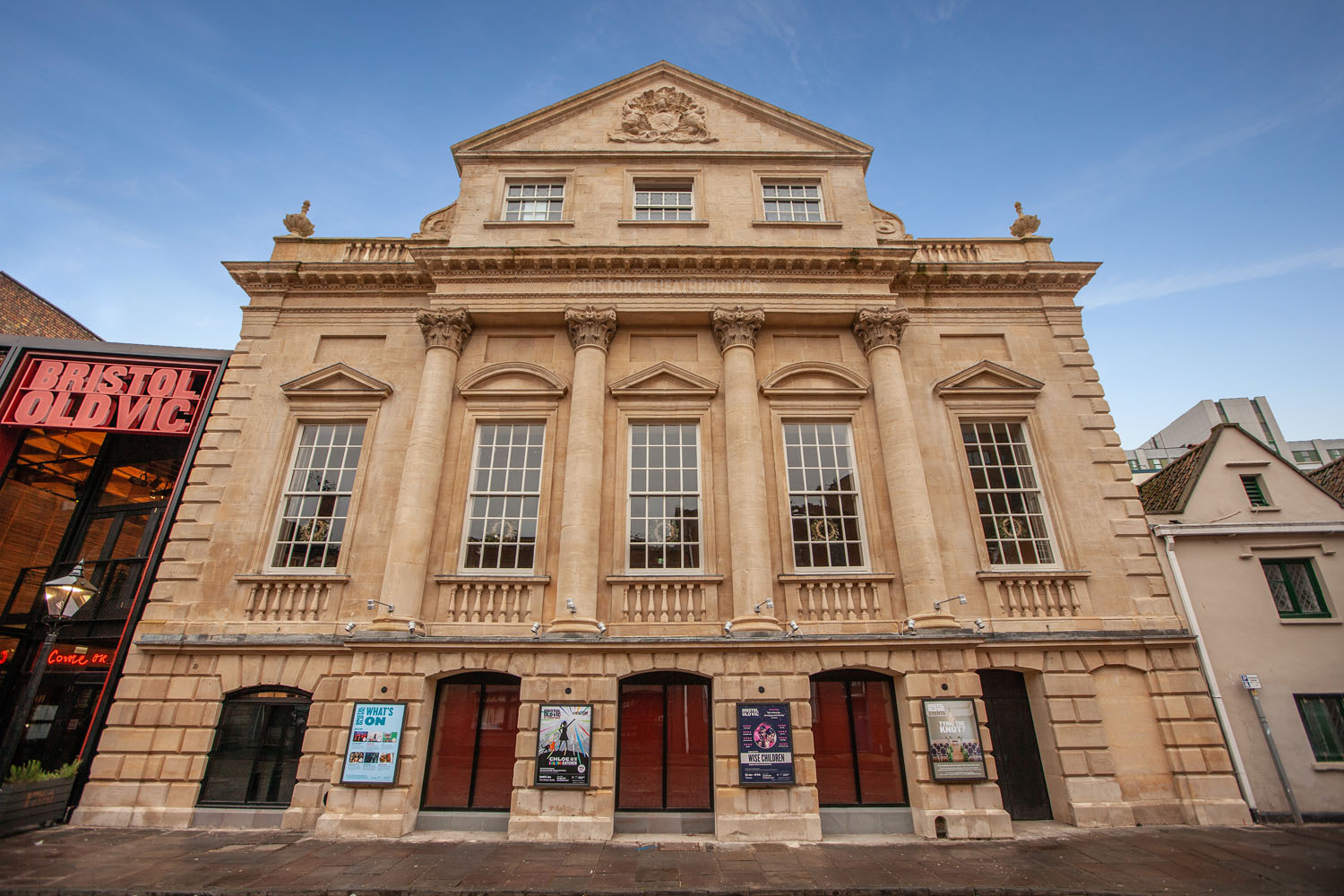 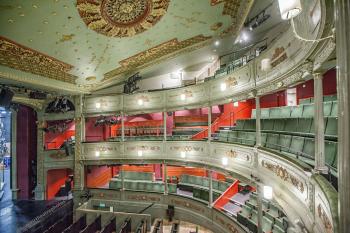 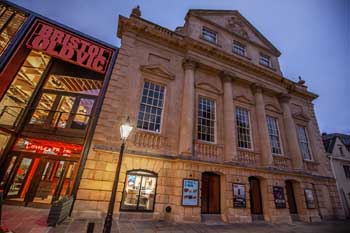 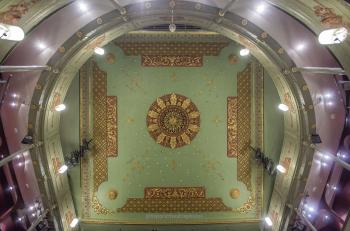 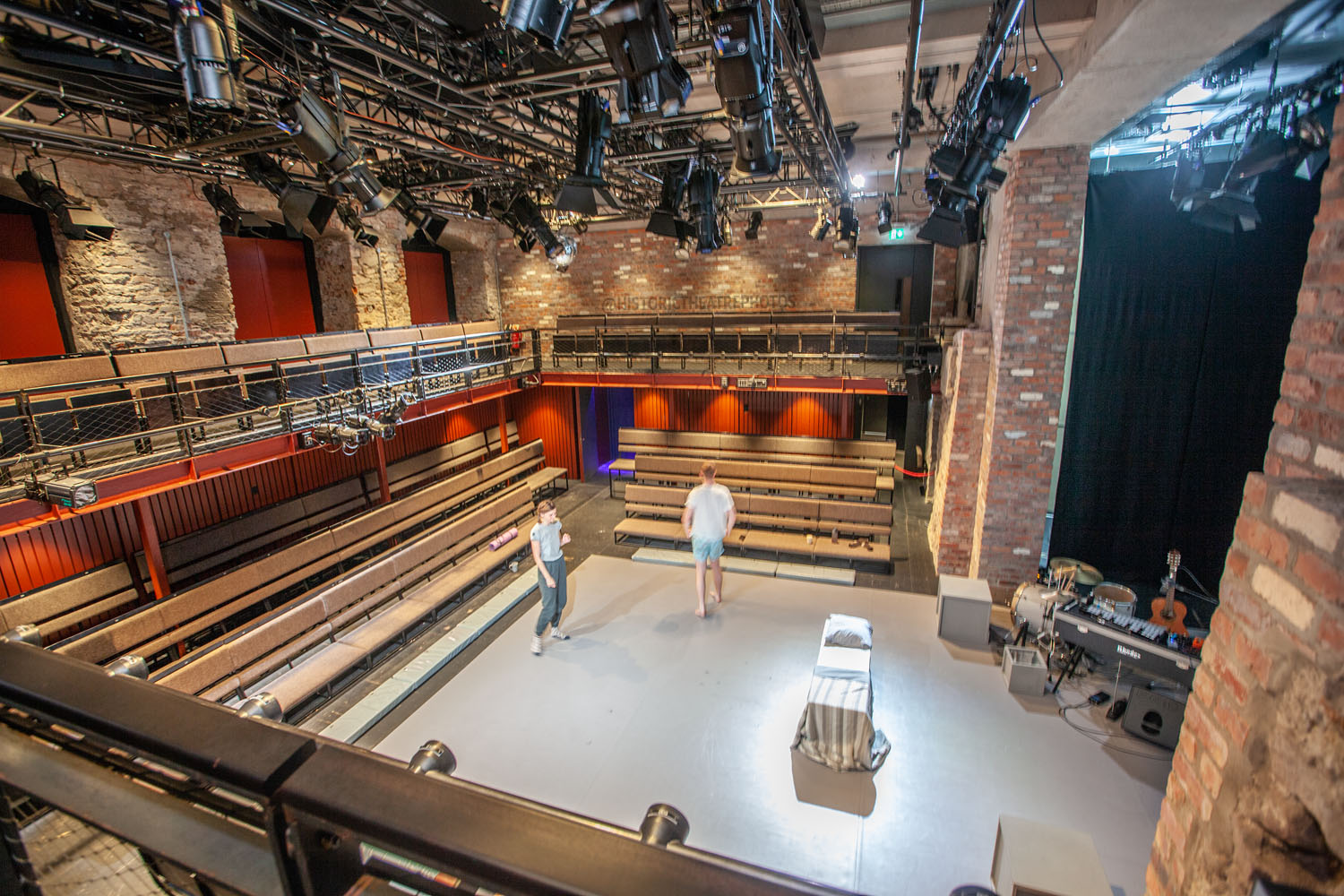 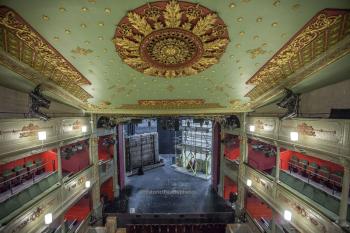 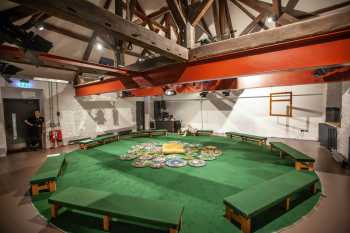 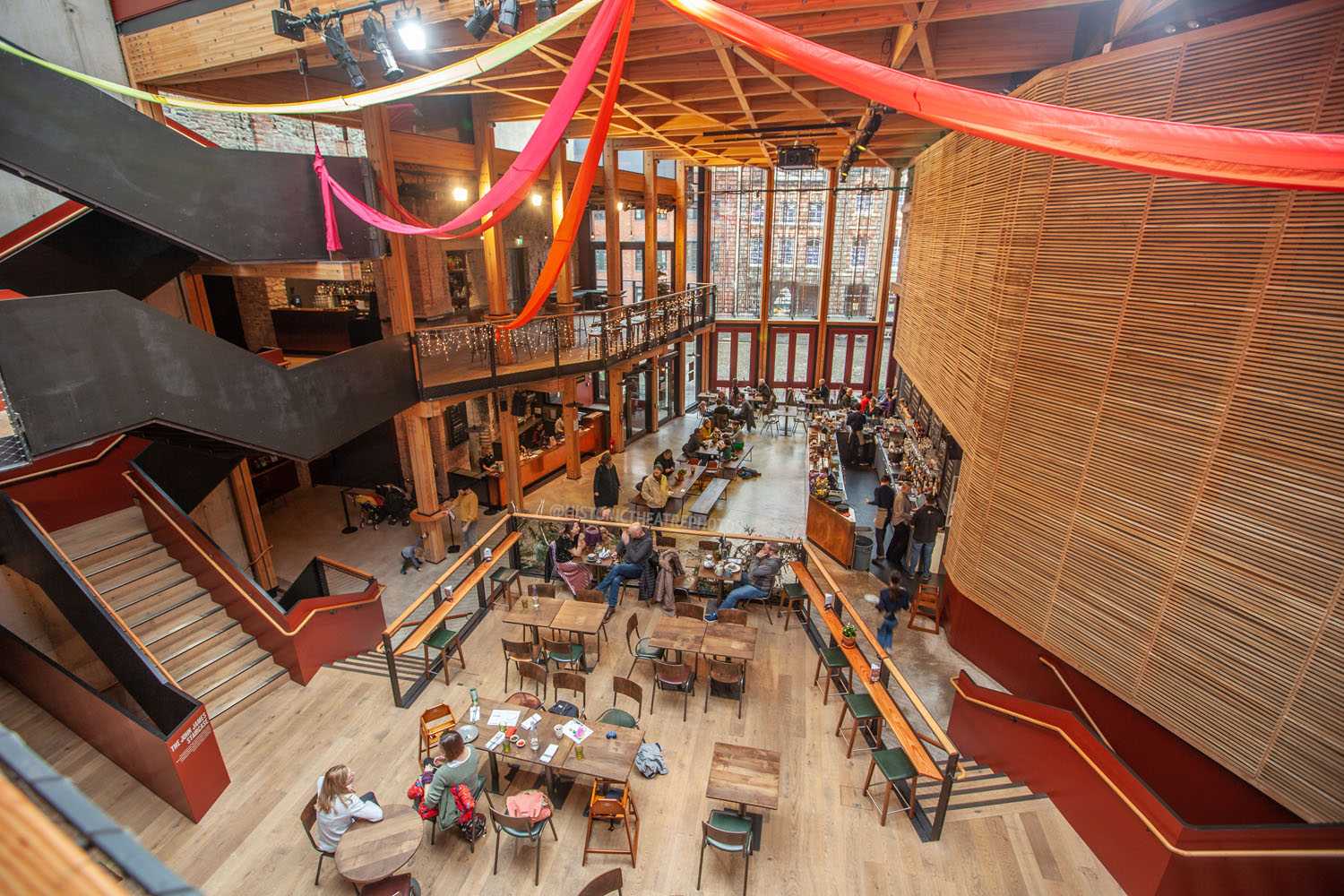 Architect Thomas Paty supervised the construction of designs by David Garrick’s carpenter at the Theatre Royal in Drury Lane, James Saunders. The theatre was closely modeled on the Richmond Theatre in Surrey (1765) for which Saunders had provided drawings, and London’s Theatre Royal in Drury Lane (1674 building). The Bristol Old Vic is a rare example of an 18th century horseshoe theatre.

The Foundation Stone was laid on 30th November 1764, with the intent of opening the theatre the next Summer. The 50 subscribers who had each invested £50 to fund the theatre’s building received a silver ticket which granted them “sight of any show at the theatre for the rest of their lives”.

The Circle, as originally built, consisted of nine boxes which were named for dramatic poets: Shakespeare (center box), with Johnson, Vanburgh, Row, and Steele to the right; and Fletcher, Congreve, Otway, and Cibber to the left. The eight upper side boxes, on either side of the Gallery, bore the names Garrick, Witcherley, Addison, Farquhar, Dryden, Lee, Shadwell, and Colman. The Pit (Orchestra/Stalls level) accommodated 320, the Gallery 530, and the Boxes 750, giving a total seating capacity of 1,600.

Messrs. Powell, Arthur, and Clarke took a lease of seven years on the theatre and presented its opening night in late May 1766. In the absence of the royal patent required for public performance of plays (Licensing Act 1737), the opening night was described as a concert “with a specimen of rhetoric”. Prolific actor David Garrick delivered the evening’s prologue. Patrons could not directly access the theatre from the street and instead had to knock on the door of a house belonging to a man named Mr Foote and walk through his backyard to reach the theatre’s entrance.

In 1777 the theatre was awarded a royal patent, reopening on 30th November 1778 as the Theatre Royal, Bristol. John Palmer, a brewer and chandler from the neighboring town of Bath who had invested in the theatre there and secured its royal patent in 1768, took out a 20 year lease on the theatre. Palmer obtained the royal patent and completed work in the Gallery (conversion of the upper boxes into a full gallery, with new raised ceiling, seating 550, for a total seating capacity of 1,620). The theatre was run jointly with the Theatre Royal in Bath, a single company performing at each theatre on different days. By 1785 Palmer had transferred his licences to actor William Wyatt Dimond. 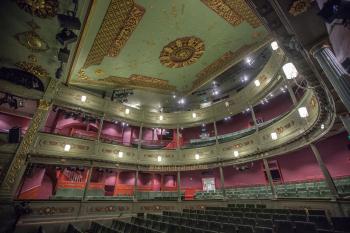 The relationship with the Bath Theatre Royal was disbanded in 1817 when the theatre was acquired by Mr John Boles-Watson, who had an unsuccessful run at the theatre and in March 1819 the lease reverted to William MaCready the elder. MaCready was an actor with little experience of management and so entrusted management to his son, William Charles MaCready. In August of 1819 the theatre was fitted with “coal-gas” lighting, replacing the earlier oil lamps. The theatre had little success at the time but its fortunes slowly turned-around in the late 1840s and 1850s under the management of his widow, Sarah MaCready. In September 1845 Sarah “Mrs Mac” MaCready became lessee and manageress of both the Bristol and Bath Theatre Royals. Mrs MaCready died 9th March 1853 and she was buried in the cathedral in Bristol, next to her husband. MaCready’s son-in-law, James Chute, took over following Sarah’s death, however Chute lost interest when he opened the New Theatre Royal Bristol on Park Row. in 1867 well-known theatre architect C.J. Phipps oversaw the removal of the forestage, a fire curtain created upstage of the Proscenium Arch, and installation of a new ventilator amidst a new star-studded auditorium ceiling.

The 20th century saw a number of failed attempts to revive the theatre, and by the 1930s it was in a state of disrepair. In 1942 it was sold for conversion into a banana-ripening warehouse. Public outcry led to the suggestion that a revived theatre might emulate the recent success of London’s Old Vic theatre – that it could become Bristol’s “Old Vic”. In 1943 the forerunner of today’s UK Arts Council supported the reopening of the theatre, and following the end of the war experimented with the idea of subsidizing a regional theatre by sending an acting troupe from London’s Old Vic to Bristol. The Bristol Old Vic company went on to present many successful seasons at the theatre throughout the 1940s and 1950s, and the regional subsidy model was rolled-out across the UK.

In 1963 the Arts Council’s role was taken over by Bristol City Council and the Bristol Old Vic became fully independent of its London namesake.

In 1970 a major refurbishment was begun however ran out of money before it could be completed. Coopers’ Hall (1743-44), in front of the theatre on King St and operating as a fruit and vegetable market at the time, became the theatre’s new Front of House space while the previous entrance area was converted into a studio theatre. To enable the theatre to house elaborate sets and more efficiently transfer a show’s sets directly to other theatres, the 18th century stagehouse was demolished and rebuilt with a new fly tower, the stage was leveled, and the 19th century stage machinery underneath the stage removed. Money ran out before the auditorium’s seating could be adjusted to take account of the changed sightlines effected by the now level stage, resulting in large parts of the new stage not being visible from many of the old seats. Additionally, the building changes badly affected the theatre’s acoustics. There was no money available to fix the multiple issues and they persisted for over 30 years.

In 2007 public concern for the theatre’s survival resulted in formation of a new board of trustees. With the theatre dark by this time, the new board of trustees carried out essential remedial works before embarking on the first phase of a major refurbishment, completed in 2012. The £12 million project saw the original geometry of the Georgian theatre restored, auditorium seating reconfigured and replaced, new rehearsal facilities added, and improvements made backstage.

Following a period of consultation and careful design, in 2016 the major refurbishment’s second phase broke ground. The refurbishment was completed in late 2018, seeing all Front Of House areas reconfigured and improved with the 18th century Coopers’ Hall being returned to its original use as an events space. 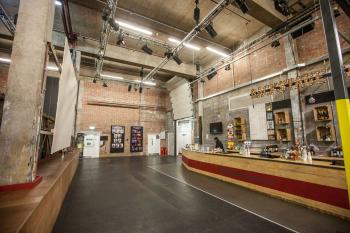 The theatre boasts a large scenic workshop with direct access to the stage, situated at the House Right side of the auditorium. The workshop space was built out as part of the 1970s changes to the theatre. Workshop facilities include a full-size paint frame, operated from the workshop floor with the paint frame disappearing into a slot in the workshop floor. Although still counterweighted it is now electrically, as opposed to manually, operated. For the duration of the 2016-2018 Front Of House refurbishment the workshop was tastefully reimagined as the “Backstage Bar” and temporary theatre entrance, with the paint frame forming a natural division of the space between audience circulation and seating/display areas. 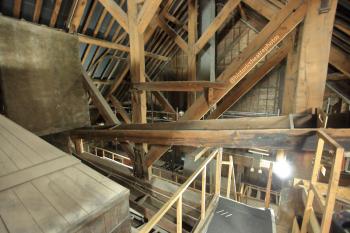 The Bristol Old Vic actively references its history for learning and educational purposes, and throughout the building there are interesting displays pointing out period features. The Gallery retains some of its original bench seating, parts of which were frequented by soliciting prostitutes in the 18th century. A 1981 scale model of the original stagehouse and 19th century stage machinery is a popular display piece with audiences. Replica 19th century rain and wind machines have been created for educational purposes, however the pièces de résistance is the 19th century “Thunder Run” which still exists in the attic above the auditorium. The Thunder Run created the sound of rumbling thunder when smoothed beech balls of varying diameter were released down a gently sloping wooden trough. It was last used as a stage effect in a production of King Lear in 2016. There are only four Thunder Runs remaining in UK theatres: the Bristol Old Vic, the Globe Theatre in Plymouth, Her Majesty’s Theatre and the Playhouse Theatre, the latter two located in London. The Bristol Old Vic’s Thunder Run is the oldest and is located above the auditorium for maximum effect (the London Thunder Runs are located backstage).

Over the centuries many actors have sneaked-up to the theatre’s attic and its walls are covered in their signatures and sound bites representing over 250 years of theatrical performances at the Bristol Old Vic.

How do I visit the Theatre Royal?

The theatre runs regular tours, generally every Wednesday and most Saturday mornings, which last one hour and cost £12 per person (£10 concessions). Spaces regularly included on the tour: the new Bristol Old Vic foyer; the Georgian Auditorium, Stage, Gallery, and Pit passages; the Paintshop and Paint Frame; the Weston Studio; and Coopers’ Hall. Access is subject to theatre operations at the time of your tour and some areas may be restricted. Check the theatre’s website

for further details and online booking.

The theatre has previously participated in the annual Bristol Open Doors

event and may do so again in the future.

Photos of the Theatre Royal