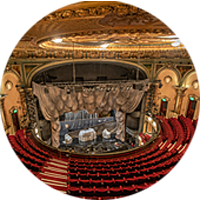 Her Majesty’s Theatre, as it currently stands, opened in 1897. It is the fourth theatre to have been built on the site, the Queen’s Theatre having opened there in 1705. Actor-Manager Herbert Beerbohm Tree, who commissioned the 1897 theatre, originally used the top level of the building as his private apartment, including the high-ceilinged French-style dome as a banqueting hall. The theatre is thought to be the only theatre in the United Kingdom whose name changes with the sex of the British monarch. History of the first three theatres to have been built on the site: Vanbrugh’s Queen’s Theatre
In 1703, architect and playwright John Vanbrugh acquired the lease on a former stable yard in Haymarket with the intention of building a new theatre; his vision being to increase the share of profits passed-on to playwrights and actors. He was joined in his vision by William Congreve, and in 1704 they received Queen Anne’s authority to form a Company of Comedians.
Building of their new theatre commenced henceforth, and given the land was ultimately owned by the Crown Estate, the new theatre was named the Queen’s Theatre. It opened on 9th April 1705 with the Italian opera The Loves of Ergasto – the first Italian opera performed in London.
Due to mounting losses and increasing running costs, in May 1707 Vanbrugh sub-leased the theatre – at considerable loss. In December 1707, the Lord Chamberlain’s Office ordered that “all Operas and other Musicall presentments be perform’d for the future only at Her Majestys Theatre in the Hay Market”, essentially forbidding the performance of further non-musical plays there.
The theatre became devoted to Italian opera and was sometimes known informally as the Haymarket Opera House. On 24th February 1711, Handel’s first Italian opera composed specifically for the London stage, Rinaldo, was premiered to great public acclaim. Handel would go on to have more than 25 operas premiered at the theatre, aided by the formation of a “Royal Academy of Music” in 1719 to help support Handel’s productions at the theatre, with sponsors including the Prince of Wales. Handel was a partner in the theatre’s management from the late 1720s to 1734.
The theatre was renamed the King’s Theatre in 1714 upon the accession of George I to the throne. Lacking letters patent, the theatre remained associated with opera for many years. In 1778 the lease was taken over by Richard B. Sheridan and Thomas Harris (stage manager of the Theatre Royal, Covent Garden), who had the theatre’s interior remodeled by noted architect Robert Adam. Due to poor financial performance, the Harris & Sheridan partnership dissolved with Sheridan buying-out his partner, however Sheridan would soon face bankruptcy himself and within three years was bought out by his lawyer, William Taylor.
In 1782 Taylor had the theatre remodeled by Michael Novosielski, formerly a scene painter at the theatre. The following year Taylor was arrested for non-payment of debts and was forced to sell his lease on the theatre, which was then bought by Thomas Harris. Further legal action transferred the lease to a board of trustees, however the board had a flagrant disregard for the theatre and its creditors and so in 1785 the Lord Chamberlain’s Office took charge with Giovanni Gallini acting as the theatre’s manager.
The theatre suffered a catastrophic fire on the evening of 17th June 1789. The fire had been set deliberately on the roof of the building. Gallini offered a reward for capture of the arsonist(s) but it was never granted.
Second Building: King’s Theatre, Italian Opera House, & Her Majesty’s Theatre (1791-1867) Second Theatre in 1808, from Ackermann’s Microcosm of London
William Taylor built the second theatre on an enlarged site and employed Michael Novosielski as the architect. At the time it was the largest theatre in England. The Lord Chamberlain’s Office refused a performance licence and so the theatre opened on 26th March 1791 with a private performance. The license dispute was later settled and the first public performance of opera in the new theatre took place on 26 January 1793. The theatre went on to host the first London performances of several of Mozart’s operas including Don Giovanni.
Between 1816 and 1818 the architects John Nash and George Repton made alterations to the building including an increase in seating capacity. They were also responsible for adding the Royal Opera Arcade which still runs behind the building on the west side. It is the only surviving part of the second theatre in addition to being the earliest example of a London arcade.
With the British premieres of five Rossini operas, over time the theatre became informally known as the Italian Opera House. In the early 1820s the theatre hosted a further nine Rossini opera premieres, the latter two during a five-month residency by the composer.
The theatre was renamed Her Majesty’s Theatre, Italian Opera House in 1837 upon Queen Victoria’s accession to the throne.
In 1842 Benjamin Lumley took over the management of the theatre with Michael Costa as the principal conductor. Following several years of the performers feeling neglected in terms of pay, Costa moved his opera company to the Theatre Royal, Covent Garden and the theatre’s name changed to Her Majesty’s Theatre.
In 1847 Jenny Lind made her English début at the theatre in the presence of the Royal family and composer Felix Mendelssohn. Lind performed to acclaim for a number of seasons at the theatre and became known as the Swedish Nightingale.
The theatre was closed between 1852 and 1856 but went on to premiere the Verdi operas La traviata and Luisa Miller in 1856 and 1858 respectively. The fire of 1867
In 1862 James H. Mapleson took over management of the theatre, however on 6th December 1867 the theatre suffered another catastrophic fire. Only the stone outer walls survived.
Following the catastrophic fire at the theatre it was suggested that “iron drop curtains” might be employed in theatres “so that if a fire broke out on the stage it might be shut off from the auditorium. This, it has been said, would give the audience time to disperse, and perhaps be the means of saving one part of the building”. The answer to this was “that such a curtain would get red hot and so become a means of mischief”. History would paint a different picture, and the iron “Safety” [Fire] Curtain would be born.
Third Building: Her Majesty’s Theatre (1868-1896) Her Majesty’s Theatre in 1896
The third theatre was constructed within the surviving walls of the second theatre. Charles Lee and Sons, who had taken over John Nash’s practice, designed the theatre in association with William Pain in a “thoroughly fireproof” fashion with an auditorium that could accommodate up to 2,500. However, a dispute over the rent between the theatre’s manager and the owner resulted in the theatre being dark until 1874 when it was sold to a religious group.
On 28th April 1877 the building returned to theatrical use and continued to host opera including the London premiere of Bizet’s Carmen and several seasons by the Carl Rosa Opera Company.
With rapid advancements in theatre technology in the late 19th century, the theatre became quickly outdated. This, coupled with the desire of the landowner to rebuild the entire block, resulted in the demolition of the theatre in 1892. Her Majesty’s Theatre, as completed in 1897

In the early 1890s architect C.J. Phipps was commissioned to design the new theatre, and in 1896 financing was agreed with Herbert Beerbohm Tree, manager of the Theatre Royal, Haymarket just across the street. The design of Her Majesty’s Theatre would end up being the last of C.J. Phipps’ work to be completed within his lifetime.

The exterior design of the theatre on Haymarket was a symmetrical pair with the Carlton Hotel next-door, which filled-in the rest of the block, occupied a large part of the site of the previous theatre, and was also designed by Phipps. The hotel was badly damaged in the Second World War and was ultimately replaced by New Zealand House in the late 1950s, home of the New Zealand High Commission.

The theatre’s auditorium consists of three primary levels (Stalls/Pit, Dress Circle, and Upper Circle/Gallery). Three boxes on each side of the stage are flanked by gigantic Corinthian columns of marble; the box “stacks” each side framing the proscenium arch with a coffered sounding board above (note: all of this survives intact but is painted black for the theatre’s current resident The Phantom of the Opera). Interior decoration of the theatre was by W.H. Romaine Walker and was executed in the style of Louis XIV. The theatre’s original seating capacity was 1,320.

The theatre opened on 28th April 1897 with the play The Seats of the Mighty by Gilbert Parker. The play was not greatly received, however the theatre received high praise.

Herbert Beerbohm Tree and his actress wife would star in many of the presentations at Her Majesty’s, however latterly the public grew weary of Tree’s performances, finding his acting methods stuck in the past. Tree and his wife had an apartment in the top level of the building which included a banqueting hall in the high-ceilinged French-style dome where he was known to entertain guests.

In 1901 the theatre’s named changed to His Majesty’s Theatre following the accession of Edward VII to the throne. In 1904 Tree founded the Academy of Dramatic Art (now RADA) at the theatre. Even after the group moved to a different location, Tree still employed large numbers of RADA graduates at his theatre.

The theatre’s large stage naturally lent itself to musical theatre, and starting in 1916 Chu Chin Chow ran for an unprecedented 2,235 performances. Oh, Kay!, which had opened the Mayan Theatre in Los Angeles in August 1927, premiered at Her Majesty’s a month later and ran for over 200 performances. The theatre would go on to host many other successful runs including Noel Coward’s Bitter Sweet in 1929.

In February 1952, with Elizabeth II’s accession to the throne, the theatre’s name changed to the current Her Majesty’s Theatre. Notable musicals before and after this time include The Merry Widow in 1943, Brigadoon in 1949, Paint Your Wagon in 1953, West Side Story in 1958, Gilbert & Sullivan delights The Pirates of Penzance and H.M.S. Pinafore in repertory in 1962, and Fiddler on the Roof in 1967 which ran for over 2,000 performances through to 1971. The 70s and 80s welcomed Pippin, Jeeves, The Good Companions, and Bugsy Malone among others.

premiered at the theatre. It is the second longest-running musical in London’s West End after Les Misérables.

Designer Maria Björnson is credited with using the theatre’s Victorian understage machinery to stage a key scene where the Phantom travels across a lake of smoke in a boat. The boat is controlled by modern means however the placement of the other scenic elements, and the manner in which they appear, is indeed based upon the 120+ year-old stage machinery still in place below the stage.

announcement that all London West End theatres would be closed effective 16th March 2020 as a result of the coronavirus pandemic. In late July 2020 Cameron Mackintosh announced that the London production of Phantom would close “permanently”, although he added that he is determined to bring the show back to London’s West End in the future.

How do I visit Her Majesty’s Theatre?

As of early 2020 the theatre does not offer regular tours. You can check for any upcoming special events, or book tickets for the current show, on the LW Theatres website

The London Festival of Architecture ran tours of the theatre in June 2019 and they may offer these tours again in the future; keep an eye on their website

Photos of Her Majesty’s Theatre