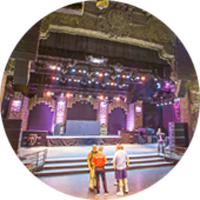 The Mayan Theatre in downtown Los Angeles is a stunning example of the 1920s fascination with revival-style theatre architecture, in this case Mayan Revival. The Mayan opened its doors in 1927 as a legitimate theatre; it is now used as a music/nightclub and live events venue. Between times it has showcased movies, blue movies, and has been the scene of many movie location shoots. 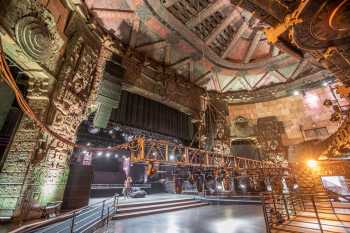 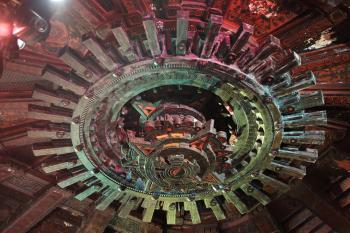 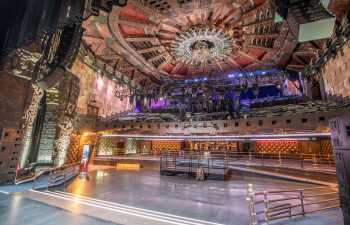 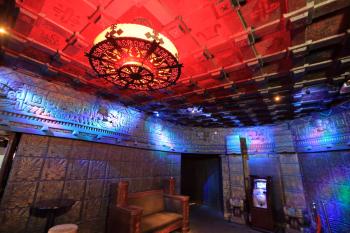 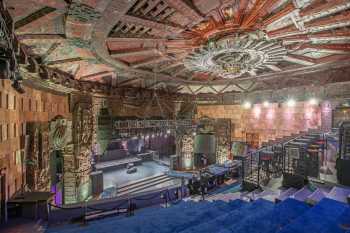 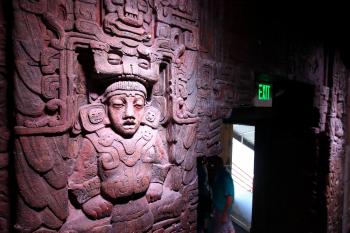 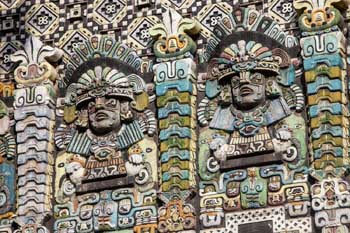 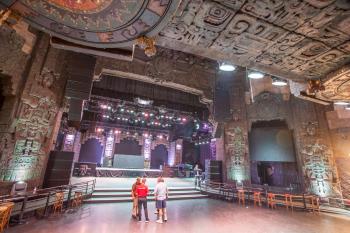 Designed by the architectural firm of Morgan, Walls & Clements, with Stiles O. Clements taking the lead, the theatre originally seated 1,491 on two levels and was intended as a musical comedy house. Despite being located immediately next to the Belasco Theatre, which had opened 10 months earlier in November 1926, both theatres were under the same management and so programming was designed to be complementary, not competitive.

Legitimate drama ran at the Belasco with the Mayan staging musical comedies. It is noted in contemporary newspaper reports of the time that the Belasco took the overflow audience from the Mayan on at least one occasion, proving the management arrangement of the two theatres was a success.

In November 1926 when the Belasco Theatre opened, the Los Angeles Times reported that the new theatre next door would open “during the next six months ... [and be] known as the Stowell [Theatre]”. However at an early stage of the Mayan’s planning, one of the theatre’s management team, Gerhold O. Davis, read a newspaper article about the extensive accomplishments of the Mayan civilization and subsequently hired the author, a young Mexican artist named Francisco Cornejo, to design the interior of the new theatre with a Mayan theme. 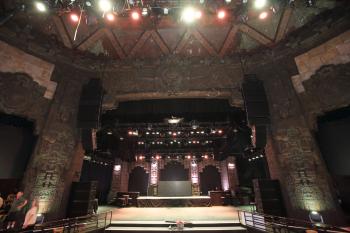 Stage with sidestages on each side

The theatre features 12ft (3.7m) wide sidestages (alternatively “tableau” or “connecting stages”) on either side of the proscenium arch, located where auditorium boxes or organ grilles would normally be placed. Prior to the theatre’s opening, the Los Angeles Times described them as a “distinct novelty” and declared it the first time such an arrangement had been seen throughout all of America.

The sidestages were intended to be used between scenes, for interludes between acts, or for special musical numbers. They were fitted with their own miniature fire curtains and act drops, complementing the design on the main fire curtain featuring Mayan jungles and temples. On a technical point it’s interesting to note that the grid structure above the stage extends over the sidestages, forward of the proscenium arch.

The main feature of the auditorium is the massive centerpiece lighting fixture, a sun design inspired by Mayan solar worship with roof beams behind depicting the Mayan calendar. The auditorium’s sidewalls feature depictions of the feathered serpent Quetzalcoatl, set above massive carved stone blocks (created in plaster) in the Cyclopean style. Although Mayan architecture was the focus, some features from Aztec architecture were included for contrast such as the Aztec eagle warrior figure which features on several exit doors.

The main lobby boasts intricate detail from both Mayan and Aztec cultures and was modeled after The Hall of the Feathered Serpents. For a long time the original exterior ticket lobby had a drop ceiling however this has now been removed to reveal a deeply-coffered ceiling in three parts which would have probably featured a small patch of painted sky in the three centers, reminiscent of openings to the sky at the top of Mayan temples.

Backstage, the majority of dressing rooms were organized around a central Green Room located directly underneath the stage (the Green Room would also function as the Trap Room should trapdoors in the stage be required). A Star dressing room was located at stage level (Stage Left) with some additional rooms above it.

Starting with its opening production of “Oh, Kay!” in August 1927, backstage staff and actors recorded the shows running at the theatre on a wall in the basement Pump Room. This list survives today, preserved by the current tenants, and provides valuable insight into the programming of the theatre over its long history. The theatre is also notable for originally having had a paint bridge at the rear of the stage. Only supporting beams for the paint bridge are visible now.

In 1947 Frank Fouce acquired the building and over the coming years changed the theatre’s policy to largely Spanish language films with occasional stage shows, comics, and singers. The 8th May 1948 edition of Boxoffice reported that the Mayan would be abandoning its “film-stage show combine policy” in favor of all-film bookings as of 31st May 1948. 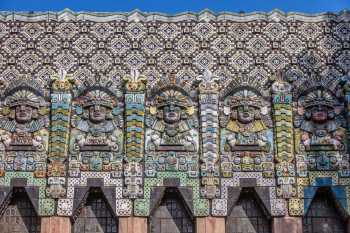 Colorful Exterior: the bright paint job was added in 1968

as an advisor to re-open the theatre as a vibrant entertainment and live events venue while respecting the theatre’s heritage going back to 1927. On the main floor the seating area was leveled from the stage to the balcony overhang (in a reversible manner should the theatre ever return to legitimate use), then terraced under the balcony. The gala opening, held in aid of the Los Angeles Conservancy

As of 2020 the theatre is still operating with Sammy Chao and his daughter Susan at the helm. The Mayan is a popular independent live entertainment and music venue in downtown Los Angeles and has counted the UK’s Prince William and wife Kate among their guests.

The Mayan has featured in many movies including The Bodyguard (1992)

How do I visit The Mayan?

As of March 2017 The Mayan does not offer tours and neither do independent companies. Your best bet is to attend one of the many and varied events The Mayan hosts. Click here for their events calendar

Photos of The Mayan