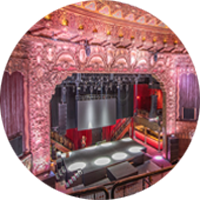 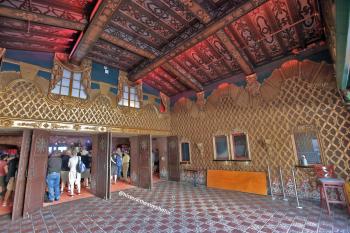 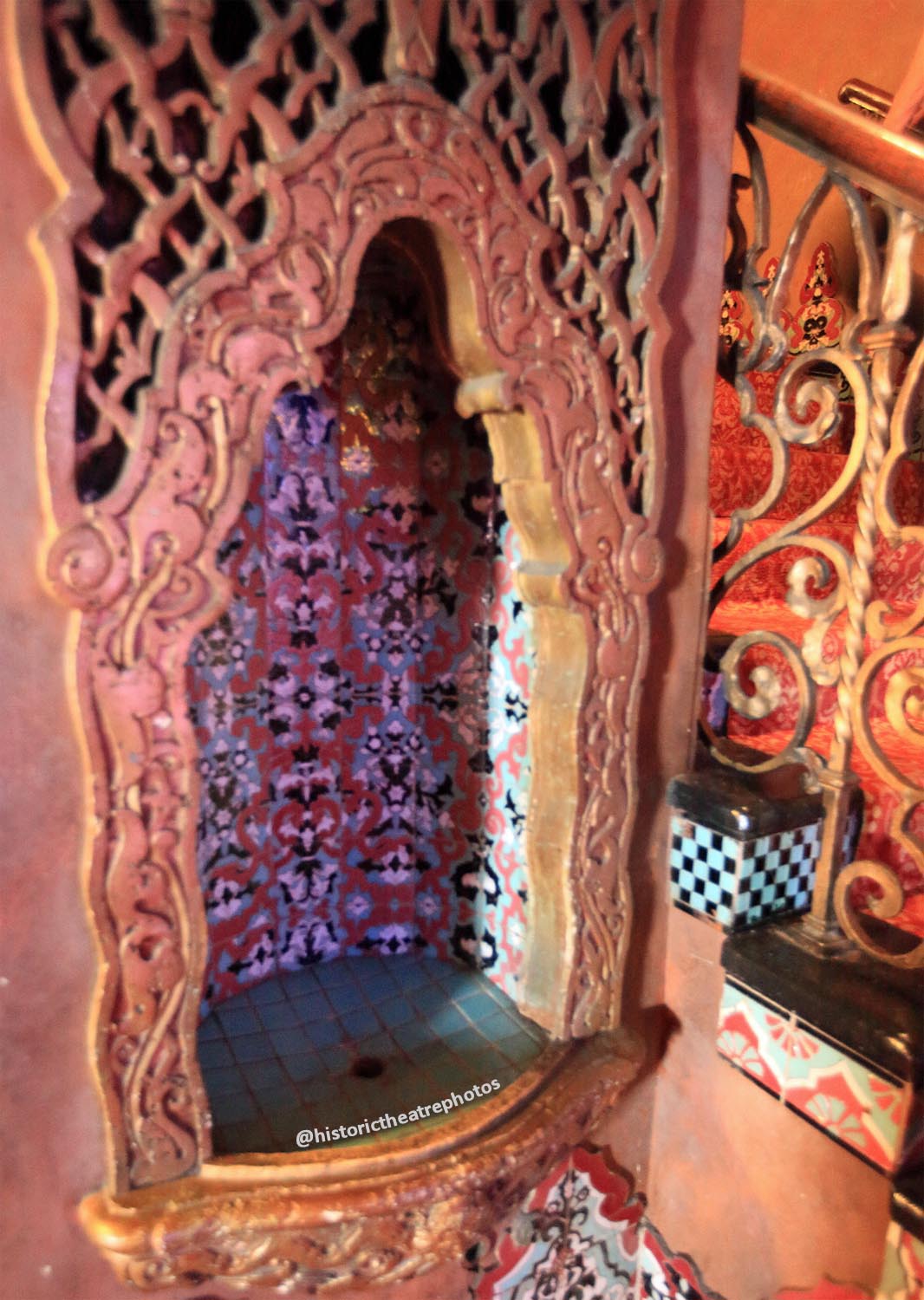 The Belasco Theater opened in late 1926 under the management of Edward Belasco and partners – Edward was the brother of famous New York theatre producer David Belasco. The same management team operated the Mayan Theatre, which was built next door immediately after the Belasco was completed. The Belasco and Mayan theatres were designed by the architectural firm Morgan, Walls & Clements, with Stiles O. Clements taking the lead. Whereas the Mayan Theatre was designed for comedy-musicals, the Belasco was aimed at hosting legitimate drama. Following an investment by Edward L. Doheny, the Belasco was originally going to be called the Doheny Theatre.

The exterior of the theatre has an exotic Spanish Conquistador theme, with a series of seven conquistador figures set within pineapple-shaped niches across the top of the façade. The Belasco’s auditorium was designed in the Spanish Renaissance/Moorish style, and contains a huge yet shallow highly-decorated and gilded dome.

The Belasco was noted for its novel and modern features including a hydraulic Orchestra Pit lift and a lighting system “by which there is never a shadow on the face of anyone sitting in the auditorium”. Much attention was given to the acoustics of the theatre, with noted expert Professor Wallace C. Sabine of Yale University being engaged in the design and construction phase, later joined by Professor Vern O. Knudsen of Stanford University.

Architect’s rendering of the theatre

According to the Belasco’s website, during the 1930s the theatre participated in the Federal Theater Project (FTP), a New Deal project to fund theatres and the performing arts during the Great Depression. The Belasco was considered one of five Federal One projects sponsored by the Works Projects Administration. The FTP’s primary goal was employment of out-of-work artists, writers, and directors, with the secondary aim of entertaining poor families and creating relevant art.

In 1948 the Belasco was sold by the Doheny estate to Belco Properties, Inc. and the theatre quickly moved toward a program of burlesque stage and screen shows.

The last movie double-bill was screened on 7th June 1950 after the property was sold the previous day to the Immanuel Gospel Temple for $200,000, to be converted into a church. The Belasco’s use as a church continued when the Metropolitan Community Church (MCC) purchased it in 1973, following the destruction (through suspected arson) of their previous “mother church” on South Union Avenue.

In January 1985 the MCC listed the building for sale at $2.1 million. The Shubert Organization toured the theatre in late January 1985 but decided the stage was lacking in terms of depth and wing space, and that the local area itself was not viable for legitimate theatre. The church ultimately vacated the building in August 1987.

By August 1988 the building had been purchased by local developer Michael M. Bolour. Remedial work was done on the theatre while Bolour worked on plans for how to monetize his investment. From the public perspective the theatre sat largely dormant, save for the odd movie shoot or special event such as the launch of the Playstation 2 game “Underworld” by Sony.

The Belasco as a Nightclub

On 19th March 2011 the Belasco officially re-opened as a multi-purpose live entertainment venue, following renovations and improvements costing in the region of $10 million. The 400-person ballroom at the rear of the balcony, above the lobby, is now an events space accessible separately from the main theatre. Orchestra seating has been removed however seating has been retained in the Balcony with the addition of cocktail tables. Backstage access from the alley running behind the theatre is now a level access from alley to stage floor and into the auditorium, allowing for some interesting uses such as staging car shows within the auditorium.

On 9th July 2011, Prince William and wife Catherine attended a black-tie dinner and reception at the Belasco, hosted by the British Academy of Film & Television.

Despite changes in use over the years, the Belasco has retained its paint bridge at the rear of the Stage. A gantry runs along the rear wall, between left and right Fly Floors and approximately 20ft up, to facilitate the painting of a backdrop which would be hung on the rearmost batten. The only other Los Angeles area theatres to retain their Paint Bridges/Frames are the Globe Theatre (Downtown LA) and the Rialto Theatre (South Pasadena).

How do I visit the Belasco Theater?

runs church services several times a day every Sunday at the Belsaco.

Photos of the Belasco Theater