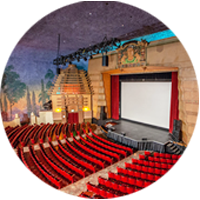 The Visalia Fox Theatre was built by William Fox of Fox West Coast Theatres and opened in February 1930. It is one of California’s few remaining atmospheric theatres. The “blue sky” auditorium ceiling still features its original twinkling stars, and would have originally been enhanced with moving clouds adding to the atmospheric spectacle. 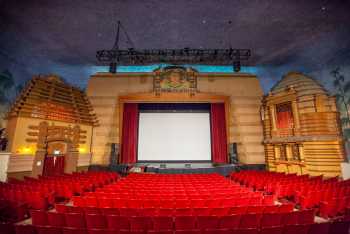 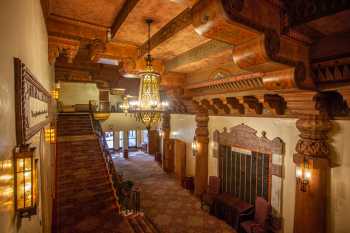 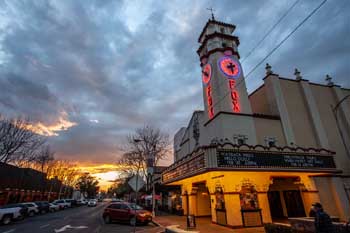 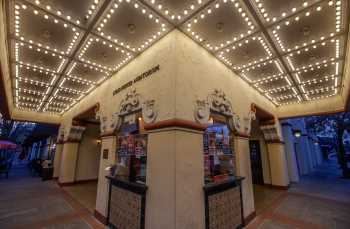 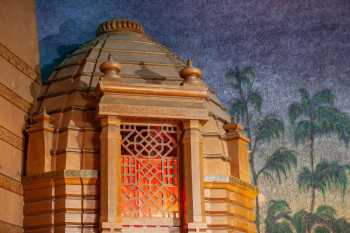 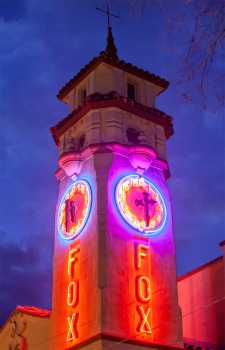 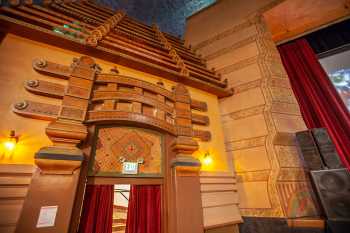 The theatre was designed by Los Angeles architects Floyd Stanbery and Clifford Balch, with a Spanish Mission exterior and East Indian theme inside. Howard Sheehan, vice president of Fox West Coast Theatres, wanted visitors to experience the feeling of entering the garden courtyard of an Indian ruler “stepping from the streets of Visalia to the mystic shrines of the gods”. 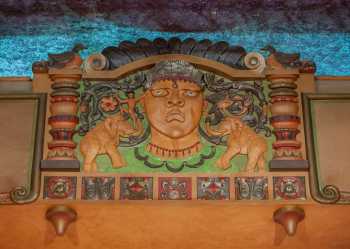 The Genie Above the Proscenium

A giant Genie, flanked by elephants, looks out into the auditorium from above the proscenium arch, which is tapered from top to bottom. On either side of the proscenium are temple pagodas, each in a different style, housing the organ chambers in their upper sections. The House Right pagoda originally contained the Musicians’ Room with direct access to the Orchestra Pit. Murals on either side of the auditorium walls had a series of multi-colored lamps to illuminate them from below in themed colors: cool blue in the summer and warm red in the winter. The walls curve into a deep blue ceiling which contains twinkling stars.

In the years after its opening, if you were meeting a friend “at the theatre” everyone knew it meant the Fox. It was the center of Visalia’s entertainment and the grandest building on Main St. Built with a heating and cooling system, then air conditioning by Carrier installed in 1935, it was also the most pleasant place to be during the common 100-plus degree heat in the summer.

The Fox was wired for sound from the outset; Fox contracted with Western Electric to provide the highest quality sound and projection equipment in the theatre. The clock was reported to be the largest of its kind ever constructed when the theatre opened in 1930. Three-sided, it was lit up in neon and easily spotted from any direction, however the weight of the neon on the clock hands contributed to the unreliable nature of the mechanism, and the clock was known for often displaying the wrong time.

The theatre was equipped with an organ, some sources cite it as a Mighty Wurlitzer, however this seems unlikely given the recent move to talkies leading up to the theatre’s opening and William Fox’s advertised policy that the Fox would play only “talkies”. According to Dave Junchen’s Encyclopedia of the American Theater Organs Volume II, William Fox recycled a 2-manual 7-rank Robert Morton organ, dating from 1920, from the La Petite Theater in Santa Monica, for installation at the Fox. Whether the organ was a Robert Morton or the reported Wurlitzer Style 210, the theatre’s organ was sold in 1956 to Pete Sweeney, who had played the organ as a teen during intermissions at the theatre. 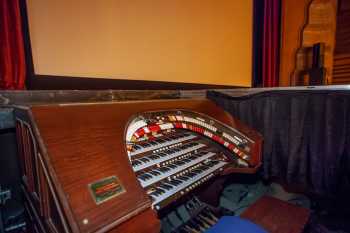 In late 1953 the Fox was fitted with a CinemaScope screen, resulting in the removal of the two huge urns flanking the stage at the edges of the proscenium arch. The massive screen’s placement meant that it was a permanent feature, entirely cutting-off the stage and rendering it obsolete.

In the 1970s management of the Fox changed hands from Fox West Coast to Mann Theatres. In August 1976, facing increased competition from two local drive-in theatres, it was announced that the Fox would be triplexed. The work started in early October and the first of the three new screens opened in early November, with the balance becoming operational by 25th November. The triplexing, which included driving a wall through the “Genie” above the center of the proscenium arch, was criticized by some of the local community as “slapdash ... [and] not intended to last”. First-run movies continued to be shown at the Fox for the next 20 years until a Mann Theatres 12-screen multiplex was opened at the nearby Sequoia Mall, at which point the Fox was closed for good. The last screening was “A Long Kiss Goodnight” on 7th November 1996.

A month after the theatre’s closing, Friends of the Fox was formed with the goal of acquiring the theatre and ultimately reopening it. By March 1997 they made a cash offer to the owners, Tulare Investment Corporation, however it was rejected. It was then suggested that the owners might donate the theatre to the Friends, but this too was rejected. However by November 1997 it seems the owners had a change of heart, as they agreed to donate the theatre to the Friends. Shortly thereafter the Fox’s marquee proclaimed a “Miracle on Main Street” to all who passed-by.

During the next two years the Friends undertook much work at the theatre, with many donations-in-kind coming from the local community. The triplexing was removed, returning the Fox to its original theatre configuration. The landmark clock tower, a very visible icon of the Fox however out of commission for years, was restored. In 1998 repairs to the clock and clock tower were completed and the clock restarted, and with its reinstated neon lighting it became a very visible reminder that repairs were moving forward at the theatre.

The Genie above the proscenium arch was recreated by Jamie Hitchcock and painted by Patrick Barszcz, faithful to the original design and color scheme. Barszcz went on to restore the auditorium murals, proscenium arch, and pagodas. In cleaning the south pagoda he removed 36 pounds of dirt including broken glass, bottle tops, and buttons!

The Fox’s grand reopening was in November 1999, in a dazzling evening featuring Marvin Hamlisch, and with a pre-event dinner in a huge tent stretching an entire city block outside the theatre.

In 2003 Porterville resident and American Theatre Organ Society member and enthusiast Ruth Dresser donated a Wurlitzer organ to the theatre, dating from either 1917 or 1919 (reports vary). The “new” organ is a 4-manual, 24-rank instrument, and much care was taken to fit the drastically increased number of pipes into the existing organ chambers. The Dresser gift also included an automated Baldwin baby grand piano, connected to the organ console, which now sits atop a platform in front of the House Left organ chamber.

The Friends of the Fox continue to manage the theatre which is open for film screenings, symphony performances, and live entertainment events.

How do I visit the Visalia Fox Theatre?

Photos of the Visalia Fox Theatre