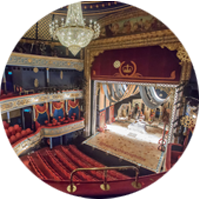 Edinburgh’s Royal Lyceum Theatre is an intimate 658-seat playhouse completed in 1883. It was the first in Britain to be fitted with an iron safety/fire curtain and the first in Scotland to use electricity for house lighting. The Lyceum is named after the 1834 Lyceum Theatre in London’s West End. 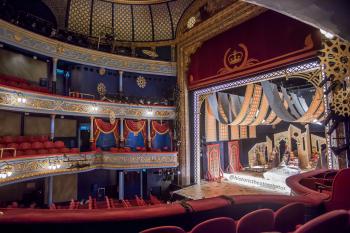 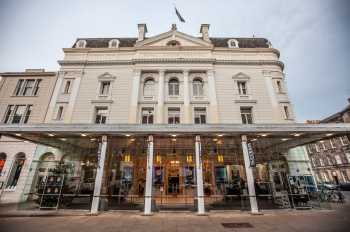 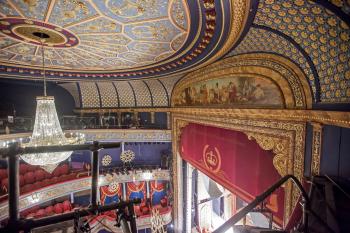 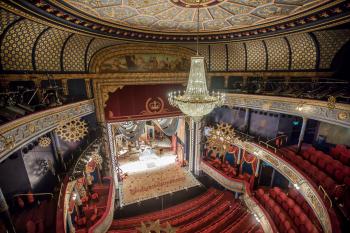 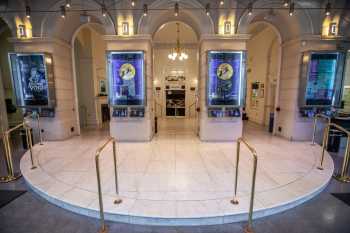 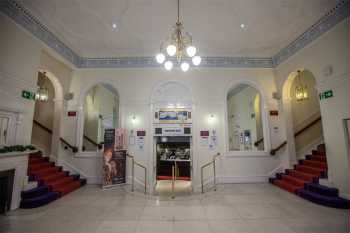 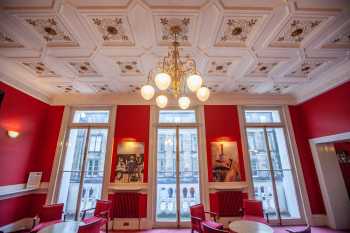 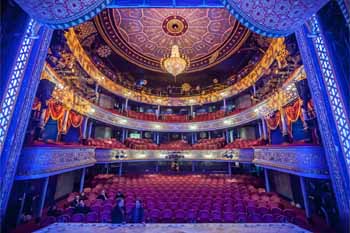 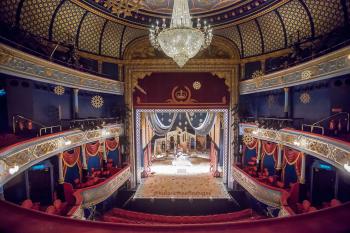 Architect C.J. Phipps built the Lyceum for Edinburgh theatre managers John Howard and Frederick Wyndham. It was designed in the style of late Victorian “picture frame” playhouses with seating on four levels, an original capacity around 2,000, and decorated in an Italian Renaissance style. Slender cast iron columns throughout the auditorium support the three shallow horseshoe balconies. Above the proscenium is a tympanum containing a painting of Apollo and the Muses by a French artist named Ballard. Front Of House areas were sumptuously finished and there was originally an open fire in the main lobby (the fireplace is still in situ) to welcome Victorian theatregoers. The exterior is finished in a French Classical style with Corinthian columns supporting a pediment and steep mansard roof above. As the theatre has undergone only minor refurbishments it remains one of the best examples of Phipps’ work.

Opening night at The Lyceum, 10th September 1883, featured performances by renowned actor Henry Irving, Ellen Terry, and the London Lyceum company, helping plant The Lyceum firmly onto Edinburgh’s theatre map from the outset. Serious drama was The Lyceum’s forté however a wide variety of programming was presented including concerts, opera, comedy, and what became known as musical comedy although was originally billed as “burlesque” in 1895. The American comedian J.S. Clarke, upon playing at The Lyceum, was described by John Howard as “the Toole of Yankeedom” (Toole was a popular UK comic). The famed Carl Rosa Opera Company played the theatre many times, as did the D’Oyly Carte. The Lyceum came to be known best for its lavish annual pantomimes, a tradition starting with “Little Red Riding Hood” in December 1883.

After running The Lyceum for 12 years John Howard and Frederick Wyndham formalized and furthered their relationship by forming noted theatre management and production company Howard & Wyndham Ltd. In addition to becoming the largest owner of quality theatres in Britain, Howard & Wyndham pantomimes were presented throughout the country for over 90 years.

In 1906, the newly-built King’s Theatre was completed however the managing company went into bankruptcy and so a deal was struck to bring the new theatre under Howard & Wyndham’s management with the addition of A. Stewart Cruikshank, son of the builder of the King’s Theatre, onto the Howard & Wyndham board of directors. Rather than operate the two theatres (and the Theatre Royal, also under Howard & Wyndham’s control at the time) in competition, The Lyceum focused on drama, straight plays, and opera; the Theatre Royal on Scottish music hall; and the King’s on lavish musicals, pantomime, and touring productions.

The Lyceum, like all theatres, faced tough competition from cinemas in the early 20th Century, and twice The Lyceum experimented with screening films. In 1912 Charles Urban’s “Live Motion Pictures in Kinemacolor” ran for three weeks, with all proceeds donated to widows and orphans of the Titanic disaster. In 1924 Ideal Films presented “The Loves of Mary, Queen of Scots”, but it became clear that audiences did not see the need to attend the theatre to watch a film when cinemas were popping-up all over the city. The Lyceum did not experiment further in film screenings. 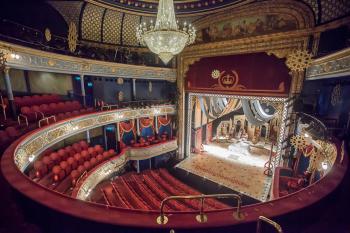 In 1960 the theatre was sold to the Meyer Oppenheim property group and, through purchases of adjacent properties, it quickly became clear that Oppenheim’s interest was in the site and not the theatre. The threat of redevelopment of the Lyceum, and surrounding buildings, loomed large. Although the City of Edinburgh was alarmed at the plan they initially did not act to save the theatre. Then on the eve of the theatre’s closure in February 1964 the City of Edinburgh purchased the theatre for £100,000, with the intention of running it as a civic theatre “owned by and administered on behalf of the citizens of Edinburgh”. The Edinburgh Civic Theatre Trust was formed in March 1964 to administer and program the theatre. Tom Fleming was appointed as Artistic Director in February 1965, and in mid-1965 the theatre closed for four months for a superficial facelift of the auditorium. It was at this time that workers “rediscovered” the Ballard mural of Apollo and the Muses above the proscenium, which had become hidden and forgotten under layers of tobacco smoke. In October 1965 the inaugural season commenced, comprising four plays, which ran until mid-December. The Lyceum and new civic trust played host to a royal visit by the Queen and the Duke of Edinburgh in July 1966.

In 1977 administration of the theatre and the producing theatre company were split apart resulting in transformation of the Edinburgh Civic Theatre Trust into the Royal Lyceum Theatre Company, which has gone on to become Scotland’s foremost repertory theatre company and one of the largest producing companies in the UK. It has a strong reputation for creating a wide range of quality drama with high production values, and currently produces up to 10 plays per year in 48 weeks of performances.

Minor alterations and renovation work took place at The Lyceum in 1929, largely superficial updates as the theatre competed against the rise of “super” cinemas. More serious work took place in 1935 when the theatre was “re-seated, renovated, and redecorated”, the headline addition being a new staircase linking the Stalls level with the Dress Circle as “a convenience to patrons moving about the theatre at intervals”. In 1966 the uppermost balcony (the gallery, or “Gods”) was closed to the public and put to use for accommodating followspots and additional stage lighting equipment. At the time this reduced the capacity to 1,647. In 1977 major works took place which saw general repairs to the fabric of the building, air conditioning installed, upgrading of public areas, dressing rooms and backstage, and redecoration of the auditorium in the current powder blue, gold and pink color scheme (the original color scheme was crimson plush with cream, lavender and gold leaf decoration). This is also probably when restricted view seats were eliminated from the auditorium. In 1991 a £3.6 million renovation project added a glass lobby onto the front of the building to increase audience circulation space and improve box office facilities. Function rooms, which had come to be used as offices, were also returned to their original use with the theatre offices moving into a building across the street. Further refurbishment and restoration of the auditorium took place in 1996, likely to be when the current seating configuration dates to.

The Lyceum is one of the principal theatres used for the Edinburgh International Festival and has featured as a venue every year since the Festival’s inception in 1947.

How do I visit the Royal Lyceum Theatre Edinburgh?

The Lyceum runs tours (60 mins) backstage at the theatre, and at their theatre workshop and stores (offsite) for groups between 10 and 20 in size. Further details are available on The Lyceum’s website