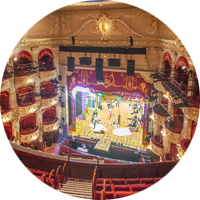 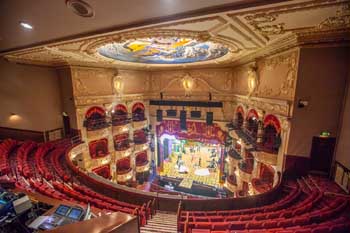 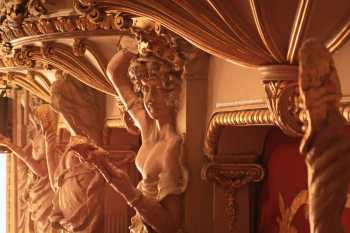 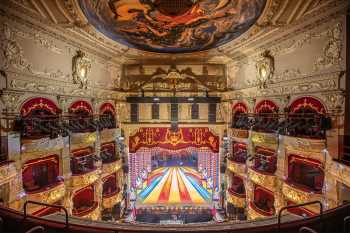 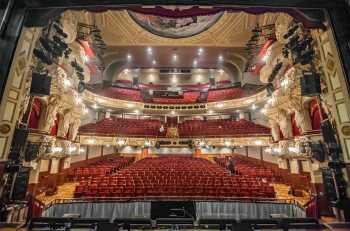 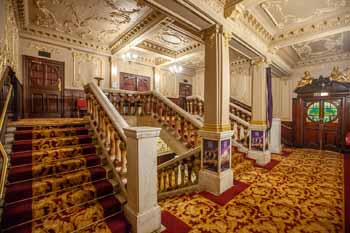 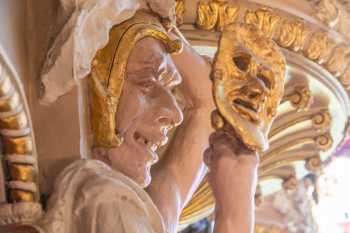 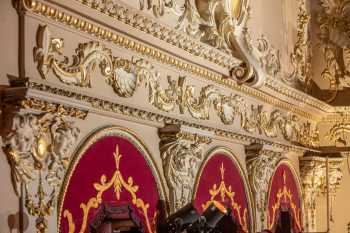 The 1906 King’s Theatre was designed by James Davidson (exterior) and J.D. Swanston (interior), originally as a rival to Edinburgh’s Royal Lyceum Theatre, however in 1928 merged into the UK theatre empire managed by impresarios Howard & Wyndham. The theatre is locally known as “The Grand Old Lady of Leven Street”. 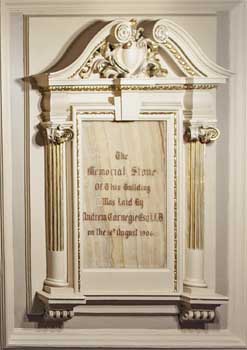 Building commenced in August 1905, and a year later Scottish-American industrialist Andrew Carnegie laid the memorial stone, which can still be seen on the landing of the central staircase leading from the main foyer to the Grand Circle bar. 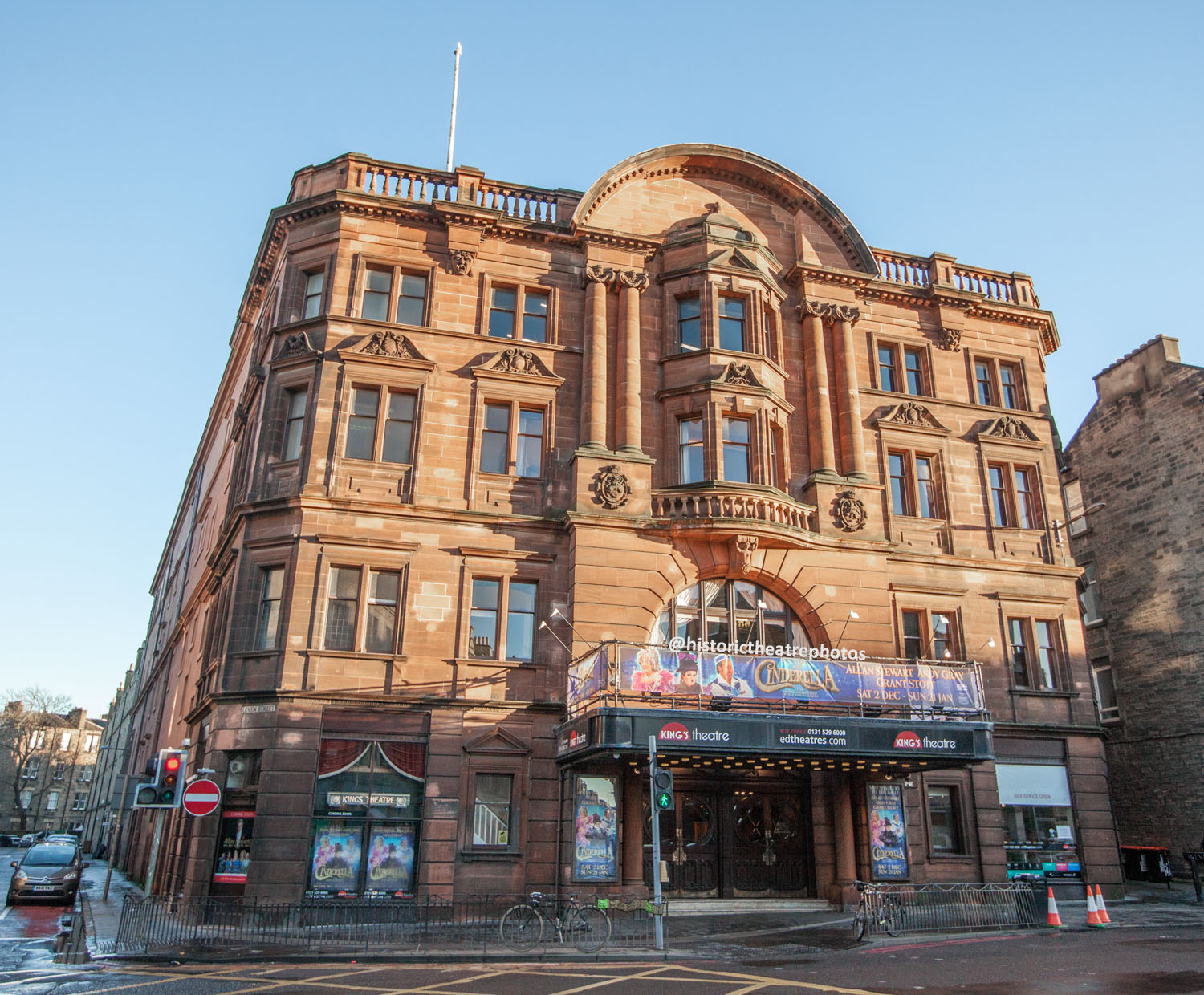 The interior design, by Swanston, leads from grand foyers/lobbies and staircases – with some superb examples of Edwardian stained glass, into an auditorium of opulence, executed in a luscious Viennese Baroque style and colored with delicate creams and gold. Voluptuous semi-nude caryatids, representing music and the arts, support the three levels of boxes on either side of the proscenium arch with numerous cornucopias, scrolls, trumpet-playing putti, masks, and cartouches completing the heavily-detailed plasterwork throughout the auditorium.

After a final bill of some £70,000, the theatre opened on 8th December 1906 with a lavish production of “Cinderella”. Mr Robert Courtneidge, a well-known theatre manager/producer and playwright of the time, and a native of Edinburgh, produced the spectacle. Local newspaper reports of the opening night were extremely favorable.

The King’s was built by the Edinburgh Construction Company (Limited), whose chairman R.C. Buchanan managed the theatre from its opening, however by 1908 it became clear that Buchanan’s company could not pay the second half of the construction bill and so the theatre fell into the hands of William Stuart Cruikshank, the building contractor. 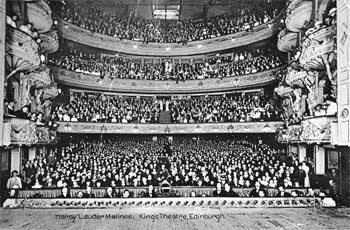 The Cruikshank Room (Grand Circle level) was A. Stewart Cruikshank’s office, and also the location of Howard & Wyndham annual meetings (AGMs), which were deliberately held on Christmas Eve to ensure minimal shareholder intervention.

The theatre was originally equipped with film projection facilities in the form of a “Bioscope Box”, built of concrete and placed behind the Grand Circle promenade. It was likely a late addition as it does not appear on the 1905 plans for the theatre. Two Simplex projectors (bioscopes) created a picture of 18ft by 12ft over an 80ft throw. A 120-horsepower 100-amp generator supplied 80V DC to the projectors and three 30-amp Flood Arcs. The theatre was also originally fitted with a central vacuum cleaning plant, with taps to all areas of the auditorium, stage, offices, and even the grid above the stage!

Portobello-born Harry Lauder was a regular performer on the King’s stage in the 1920s, at the height of his fame when he was of the highest paid performers in the world. Lauder was knighted in 1919 for his tireless work organizing entertainment for the troops in the First World War. A plaque, presented by the British Music Hall Society and located in the foyer of the King’s, commemorates Lauder’s long association with the theatre. 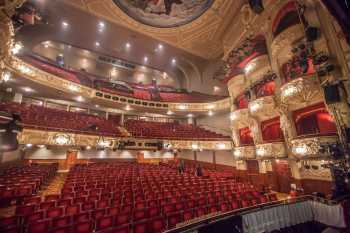 King’s Theatre in the 20th century

The King’s auditorium currently has two balconies, however it was originally built with three and a total seating capacity of 2,500. In 1951 the Gallery, always uncomfortable but latterly also unsafe, was demolished and the Family/Upper Circle (middle balcony) was re-raked more steeply backwards and extended rear-ward to the upper level of the old Gallery, but set further back from it by knocking through the original rear auditorium wall at Gallery level. This created what is now called the Upper Circle and reduced the overall seating capacity to 1,530. The rear portion of the Upper Circle, behind a broad cross-aisle sweeping across the entire Upper Circle approximately midway, was initially called the Family Circle.

The structural alterations, designed by architects Rowand Anderson, Kininmonth and Paul, lasted 10 months with the theatre being closed from the end of the 1950-51 pantomime “Cinderella” to the start of the 1951-52 pantomime “Puss In Boots”. The theatre was committed to be open for the 1951 International Festival (staged annually in August), however in May 1951 it was regretfully announced that the works would not be completed in time for the Festival and as such the Upper Circle seating area would be unavailable for Festival audiences. The theatre later reopened on 14th December 1951 with the 1951-52 pantomime “Puss In Boots”. 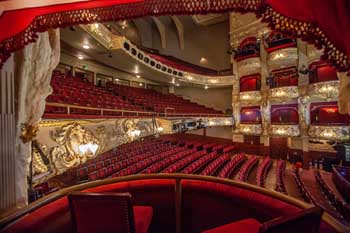 Auditorium from first level of Boxes

The King’s had undergone some improvements the previous year. In June 1950 the theatre’s original canopy/marquee was removed, to be replaced with a more modern design in time for the 1950 International Festival. It was noted that the new canopy, replacing the original which had been in place since the theatre’s opening in 1906, would have no stanchions on the street which impeded pedestrians alighting from cabs or taxis, as it would be designed on the “cantilever principle”. The 1950 canopy remains in place to this day although it has been adapted over the years as required.

During the 1950-51 revamp, which included redecoration of the auditorium dome, the auditorium’s grand chandelier was taken down. It mysteriously disappeared, never to be seen again. The replacement, which was in situ until the completion of the repainted dome in 2013, was a poor reflection of the original chandelier. 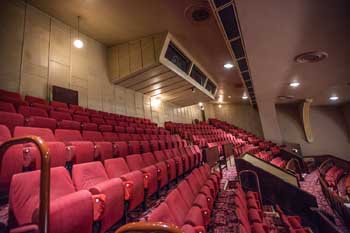 A Followspot Box was added at the rear of the new Upper Circle as part of the 1950-51 revamp, accessed from the attic space above the old Upper Billiard Room. The Dress Circle (lower balcony) was renamed the Grand Circle. The reduction in balconies from three to two explains the large swathes of plain plaster wall that are seen on either side of the auditorium flanking the Upper Circle.

The upper Billiard Room, in the front section of the building, became redundant with the removal of the Gallery; this was used as office space for some time but is now a rehearsal room. The lower Billiard Room is now the Upper Circle bar area.

In 1958 the original hemp scenery flying system was upgraded to a counterweight system from Hall Stage. The installation was overseen by Rowand Anderson, Kininmonth & Paul, architects for the 1950-51 renovation.

Sir Sean Connery used to work backstage at the King’s Theatre. In 1951, Sean (then known as Tam) worked as a stagehand and it is allegedly at the King’s that his interest in the acting profession began. He auditioned for a production of South Pacific and, now calling himself Sean, landed a small part – and the rest is history.

By the late 1960s variety theatre was being eclipsed by television across the United Kingdom and so in a bid to secure the venue’s future, the Howard & Wyndham Company came up with a plan in 1968 to sell the King’s to Edinburgh City Council. This was not without precedent; the Council had previously taken on the Lyceum Theatre from Howard & Wyndham in 1964. 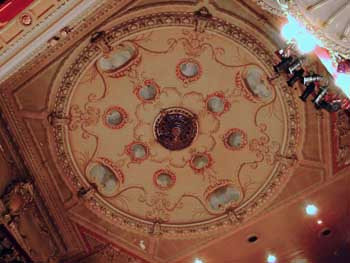 In 1985 the Council invested in the theatre by renovating and restoring soft furnishings, wood, and marblework. An orchestra pit lift was installed yielding a seldom-used extended capacity pit, and cinema-style seating replaced the traditional theatre seats reducing overall capacity to 1,336. At this time a trompe l’oeil painting by William McLaren, harmonious with the auditorium’s decoration and color scheme, was added to the auditorium ceiling’s dome, replacing the 1950s incarnation, which in turn had been painted over the original dome painting.

During the 1985 renovation it was found that a well had been sunk into the ground when the land the theatre is built upon had served as a brewery. The well’s presence necessitated reinforcement works underneath the theatre’s auditorium boxes to prevent foundations from shifting over time – one of the side-walls of the auditorium had been balancing precariously on the edge of the well for 80 years!

In 1998 management of the King’s Theatre was handed-over to the Festival City Theatres Trust (FCTT), a charitable trust established in 1991 as the Empire Theatre Trust to transform the city’s shuttered Empire Theatre into the renovated and improved Festival Theatre, in order to run the two theatres in harmony and to cut costs by sharing resources. 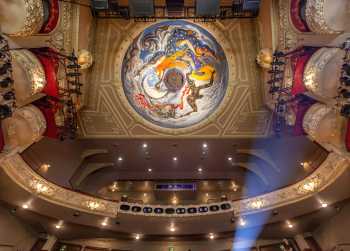 Most recently in 2012 further renovations improved the seating (Stalls and Grand Circle only) with a return to traditional theatre-style seating, fixed antiquated ventilation systems and leaks in the roof, the latter necessitating the re-painting of the auditorium dome. As the 1985 painting was not original, the Festival City Theatres Trust commissioned Scottish artist John Byrne to design a completely new painting for the dome.

The safety/fire curtain dates back to at least 1930 and is likely original. Tradition has seen past productions record their time at the King’s on the rear of the safety curtain. 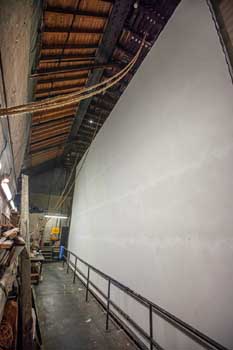 Another detail not visible to the public is the original paint frame at the rear of the theatre, immediately downstage of the rear fly floor. This allowed scenic artists to paint full-size backdrops without impacting theatre operations, even during performances. The area was originally lit through large open windows on the east-facing sloping roof above, however these have since been covered-up. There is evidence of a second frame for backdrops to be painted, on the rear of the stagehouse wall. The paint frame is not regularly used however it has been used for painting backdrops as recently as 2018. According to the Association of British Theatre Technicians Historical Committee

, it is one of only six working paint frames in Scotland.

Other original stage machinery includes a seldom-used Corner Trap, which can be positioned at either Downstage Left or Downstage Right, and a Transformation Drum (more commonly known as a “drum and shaft” mechanism or a “Chinaman”) above the grid which was used to control scene changes of flown wings, borders, and backdrops in a coordinated fashion thus achieving a complete change of scene by operating a single mechanism.

In 2018, Festival City Theatres Trust, by this time Scotland’s largest independent theatre organization, was renamed as Capital Theatres, and announced an ambitious £20-25 million redevelopment project to secure the theatre’s future for the next 50-100 years. It was announced in the January 2019 edition of Light and Sound International that theatre consultants Theatreplan

had been chosen to work alongside architects Bennetts Associates

on the redevelopment of the theatre. 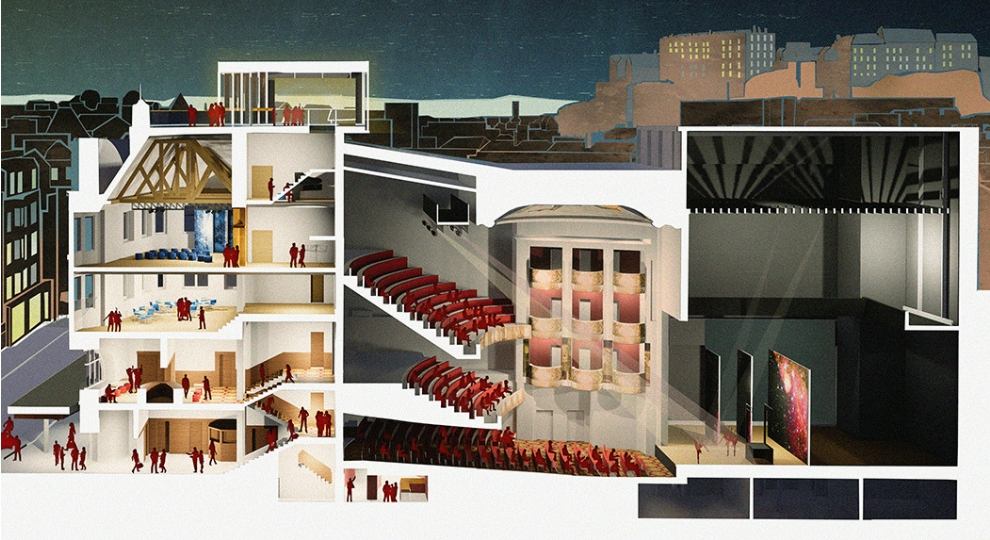 The redevelopment project plans to transform the theatre into an accessible, all-day arts venue with new spaces created for learning and heritage activities as well as hospitality. Backstage, the raked stage will be leveled, the fly tower extended in height, and new scenic flying systems installed. The theatre’s bars and foyers will be overhauled, new dressing rooms and wardrobe facilities created, a new street-level cafe-bar opened up, and a new education studio built. The project aims to increase the theatre’s annual visitor count by 50%. Scottish actors Brian Cox, Bill Paterson, playwright John Byrne, author Ian Rankin, and pantomime stars Grant Stott, Andy Gray, and Allan Stewart have all been supportive of the project.

In March 2020, Capital Theatres announced that the redevelopment of the King’s, due to break ground in September 2021, would go on hold due to the impact of the novel coronavirus. Dame Joan Stringer, chair of the board of Capital Theatres, noted “What is absolutely clear is that we all remain committed to delivering on our plans to redevelop the King’s into a modern venue, celebrating its rich heritage whilst sustaining it for future generations of enjoyment. We are, however, realistic and recognise that the current situation will affect our ability to deliver the project in our current timescales. The redevelopment works were due to start in September 2021, completing in summer 2023. We have therefore taken the difficult decision to pause the project, and are exploring the potential of starting the project 12 months later, in September 2022”.

How do I visit the King’s Theatre?

As of Spring 2017 tours are available roughly once per month. The full schedule is available on the theatre’s website

After reminding yourself of the public areas you’ll get to see Backstage and, if you’re lucky, the Understage and Dressing Room areas of the theatre normally closed-off to the public! Note: Backstage access is dependent on the visiting company’s theatre operations on the day of your tour and is not guaranteed. Information correct as of March 2017.

Photos of the King’s Theatre