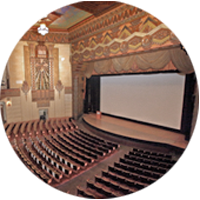 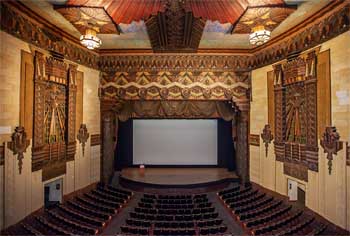 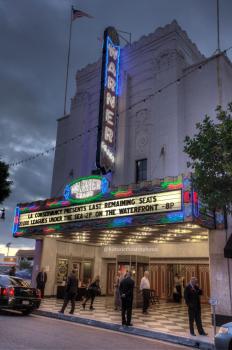 The Warner Grand opened in January 1931 as a first-run movie theatre in San Pedro for Warner Brothers. The theatre was planned to cost half a million dollars and to seat 2,000 patrons, leading Jack Warner to proclaim it as “The Castle of Your Dreams!”. The January 1931 opening was a huge event, compared by Frank Fay and featuring an appearance by Jack Warner himself.

Architect B. Marcus Priteca was contracted in 1930 to design three theatres for Warner Bros, to be located in San Pedro, Huntington Park, and Beverly Hills. All three theatres were executed in an Art Deco style. For the San Pedro theatre Priteca partnered with interior designer and muralist Anthony Heinsbergen, a followup to their previous collaboration on the Pantages Theatre in Hollywood.

Although built with a stage, in its early years the Warner Grand served mostly as a movie house. Whereas the proscenium arch is both wide and high, the stage depth is very shallow. Basic hemp-line flying facilities were included when built and were upgraded to a counterweight flying system in 2007. Organ chambers were included in the build however the theatre never received an organ.

In 1937 the theatre was renamed as the San Pedro Theatre. It prospered during the years of WWII, drawing customers from military-based operations at the nearby port and shipyards.

In the 1970s, the theatre was sold to Arnulfo Estrada and was subsequently run as a Spanish-language film house called Teatro Juarez. The theatre changed hands again in 1984 when it was sold to Raymond Howell and Clay Colbert who changed the theatre’s name to the Warner Grand and started a refurbishment program in addition to running classics, organ concerts, and other programming. Successive operators purchased the theatre in 1986 and 1991.

In 1996 the theatre was purchased for $1.2 million by the City of Los Angeles, and the Grand Vision Foundation

was formed with the aim of preserving the building rather than let it be demolished or re-developed. Grand Vision envisioned the theatre as a center for the community, and raised funds for ongoing restoration and upgrades as well as booking and promoting events at the theatre.

HVAC systems were upgraded in 2004, new seating was installed in 2006 along with a major interior renovation, and in 2014 the theatre’s original fire curtain, painted by Armstrong Studios of Los Angeles, was “rediscovered”. In 2018 an appeal was launched called “Love the Lobby”, with the intent of restoring the original painted Art Deco designs of the main lobby ceiling.

In Spring 2019 it was announced that SPF:architects

will be undertaking a $4.5 million renovation starting in Summer 2019, tentatively due to be completed in Summer 2020. Upgrades and improved facilities will hopefully persuade promoters to bring bigger acts to the theatre.

The Warner Grand has featured in many television shows and movies, examples being Melrose Place, Feud: Bette and Joan, What’s Love Got To Do With It, Pearl Harbor, Seabiscuit, and Live by Night.

How do I visit the Warner Grand?

The Warner Grand does not offer theatre tours however a wide variety of programs run at the theatre all year round. Check out the Warner Grand’s website

for the full calendar of events.

Photos of the Warner Grand