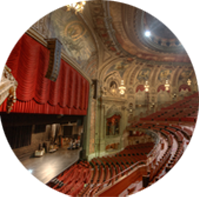 The Chicago Theatre opened in 1921 as the flagship of the Balaban & Katz theatre chain, built primarily as a movie palace but with stage facilities included. Designed by noted architectural firm Rapp & Rapp, it was executed in their signature French Baroque style. The massive movie palace takes up half a city block, rises over seven stories, and seats over 3,400. 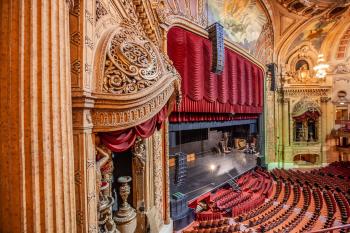 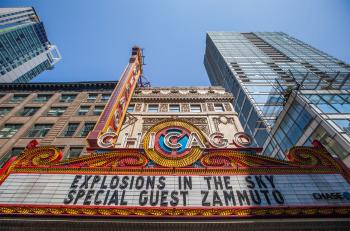 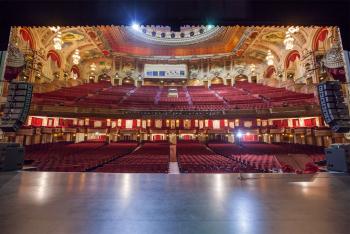 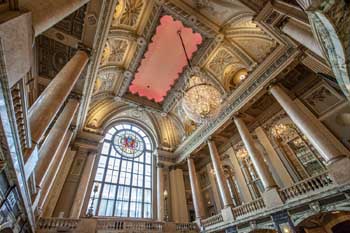 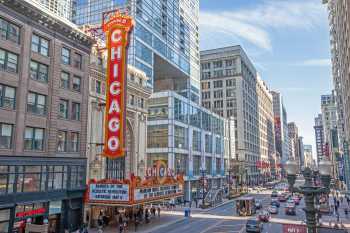 The Chicago Theatre on State St

The Chicago-based Balaban & Katz theatre chain was formed in 1916 by Abraham (Abe) J. Balaban and brother-in-law Sam Katz. At its peak Balaban & Katz operated over 100 theatres throughout the US Midwest, with 50 of those being in the Chicago area.

Balaban & Katz generally built their own theatres and many were designed by Cornelius W. Rapp and George L. Rapp, brothers who formed the architectural firm Rapp & Rapp based out of Chicago. Prior to the Chicago Theatre, Balaban & Katz had contracted Rapp & Rapp to design their Central Park Theatre, the Riviera, and the Tivoli Theatre.

At its opening in late October 1921 the new $4 million Chicago Theatre was billed as the “Wonder Theatre of the World”, and with its lavish decoration (drapes, furniture and interior decoration by Marshall Field, Steuben glass light fixtures, ceiling murals by Louis Grell – some 30ft wide) it’s hard to deny that title. The theatre’s original seating capacity was 5,000 (Main floor: 2,600; Mezzanine, 500; Balcony: 1,900) although by the 1970s that had reduced to 3,880 by eliminating box seating around the main floor sidewalls, reducing capacity of the Mezzanine boxes, and eliminating Balcony side boxes. 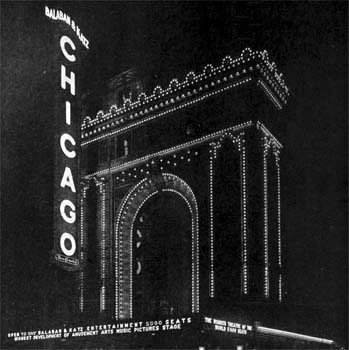 Façade in 1921, showing stud lighting highlighting the resemblance to the Arc de Triomphe

The theatre’s seven story façade, finished largely in cream-colored terracotta, echoes the Arc de Triomphe in Paris. The main lines of the façade originally featured stud lighting with bare incandescent lamps picking out the detail and helping to reinforce the reflection of Paris – the “City of Lights”.

The theatre’s marquee is not original and dates from 1949. It replaced a similar design put up in 1923 (described as featuring flashing pinwheels, swirls, and garlands of colored lights), which in turn replaced the original and relatively simple canopy-style marquee of 1921. 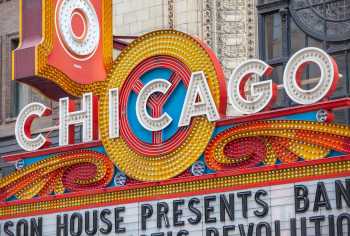 The iconic CHICAGO vertical sign, 74ft (22.6m) high and 17ft (5.2m) wide, is original to the theatre and held over 2,400 incandescent lamps. The sign was built by Thomas Cusack Company of Chicago and weighed over seven tons.

In September 1996 the original vertical sign was taken down, having been found during routine inspection to be seriously deteriorated on its interior. A new $500,000 sign, replicated from the original sign’s specifications and manufactured by Wisconsin-based Kieffer & Co., was installed in late 1996. The original sign was subsequently donated to the Smithsonian Museum.

The marquee and vertical sign are almost as famous as the theatre, having represented the city on many occasions with the iconic CHICAGO lettering playing out in multi-colored lights. The Y-shape behind the central “C” on the marquee is the city’s municipal device, a badge that symbolizes the forked Chicago River at Wolf Point.

The interior of the five story Grand Lobby boasts two levels of promenades and was modeled after the Royal Chapel at Versailles. Two bronze and crystal chandeliers, designed by the Victor Pearlman Company of Chicago, originally hung from the domed ceiling of the Grand Lobby but were removed in later renovations.

The Balaban & Katz coat-of-arms (the letters B and K with two horses holding ribbons of 35mm film in their mouths and surrounded by film reels) can be seen in the Grand Lobby’s massive stained glass window. The theatre’s Grand Staircase was modeled on the Paris Opera House.

The auditorium is much wider than it is deep (164ft wide by 106ft deep, or 50m by 32.3m) which affords excellent sightlines and makes it feel more intimate than other theatres of comparable seating capacity. The top of the auditorium’s ceiling dome is 110ft (33.5m) above the main floor level seating.

The theatre retains its original 4-manual, 25-rank (upgraded to 27 ranks in 1923) Wurlitzer organ (Opus 434). The organ was restored by the American Theatre Organ Society

in 1970, increased to 29 ranks, and is one of the oldest Mighty Wurlitzers in existence. The organ was re-dedicated on 2nd October 1975. 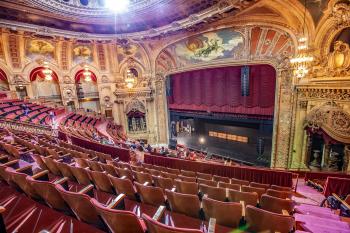 From its opening the Chicago Theatre combined premiere movies with live stage shows, and was also popular for live jazz during the 1920s and 1930s.

Above the Grand Lobby, on the 6th and 7th levels, were the offices for Balaban & Katz. The double-hung windows of the offices are still visible on the theatre’s façade, and they were said to be among the most luxurious offices in the city.

At roof level above the Grand Lobby was built “a full sized stage with complete system of stage lighting, etc., for use of the presentation department, which here prepares elaborate prologues and other scenic effects used on the Chicago stage. The musical director also is provided with a room where he can view the pictures and arrange the musical settings for them before they are seen on the screen of the Chicago”. In late 1921 the space was advertised in the Chicago Daily Tribune as the “Little Chicago”, an exclusive workshop for Balaban & Katz productions. The present state of these rehearsal and preview rooms is currently unknown, however the building can clearly be seen in aerial views of the theatre.

Ahead of the 1933 World’s Fair, the theatre was redecorated which included repainting the 14 French-themed ceiling murals in the auditorium. Louis Grell was again the artist however chose to re-theme the murals with Greek and Roman deities. The mural above the proscenium features the god Apollo riding across the sky in a chariot pulled by four white stallions, with the golden sun radiating in all directions. In addition to the repainting, the proscenium was re-draped, the projection booth enlarged, and eight bronze chandeliers were added along the sidewalls. 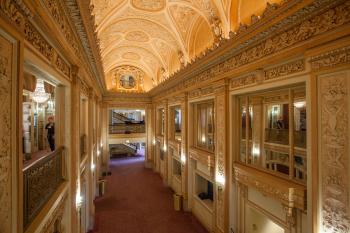 The main floor promenade, whose ceiling was uncovered in 1986 having been boarded-over in the 1950s

In the early 1950s a modernization took place, described in publicity releases as “Streamlining For A Palace of the 20’s” (article linked below), which spelled the end of live entertainment at the theatre and saw various architectural elements boarded-over or covered in drapes in favor of a minimalist design aesthetic. Significant original elements, such as Pearlman chandeliers and fittings supplied by Marshall Field, were lost.

By the 1970s business was slow at the theatre, and in 1984 it was sold to the Chicago Theatre Preservation Group along with the adjoining Page Brothers Building for $11.5 million. The theatre was closed on 19th September 1985.

A restoration project costing $4.3 million was undertaken and completed in 1986, with Anthony Heinsbergen’s Los Angeles-based decorating firm consulting on the interior design to restore the theatre to its 1930s appearance. The original lavish inner lobby promenades, modernized with drop-ceilings in the 1950s, were found to be intact and were revealed in all their glory as part of the restoration project.

The theatre was purchased in 2007 by Madison Square Garden Entertainment

who currently manage and program the theatre.

An enduring tradition is that the backstage corridor walls and stairwell are signed by stars who have graced the Chicago Theatre’s stage…from Frank Sinatra to Kelly Clarkson! The signature walls are a feature of the theatre’s daily tours.

How do I visit the Chicago Theatre?

As of February 2020 tours run daily at the Chicago Theatre, generally with no reservation needed unless on a busy weekend. Tours commence 12pm (Noon) at the State St entrance, cost $18 (Students/Military with valid ID $13, Children 12 & under $13, Seniors 65 and older $13), and run for about an hour.

Expect to see the Grand Lobby, Auditorium, Stage (assuming it’s available), Wurlitzer Organ, and the autographed corridors backstage. Exact itinerary depends on the visiting company’s schedule and not all areas may be available on any given day. Check out the Chicago Theatre’s Tour website

for more details, online booking, and for any upcoming tour blackout dates.

Photos of the Chicago Theatre