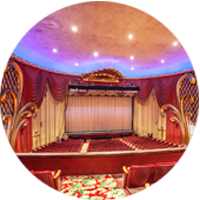 The Bakersfield Fox opened on Christmas Day in 1930 as an atmospheric theatre with a Mediterranean Village theme. Architect S. Charles Lee originally envisioned the theatre anchoring a major retail center with open arcades at street level, however ultimately plans were scaled-back. In 1953 the auditorium was given a Skouras-style makeover resulting in its current appearance. 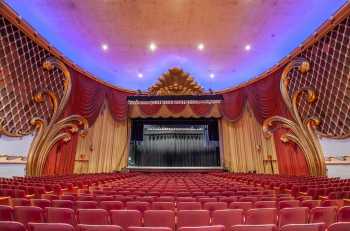 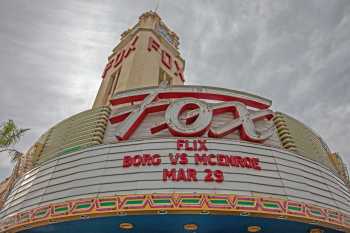 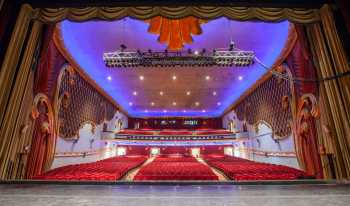 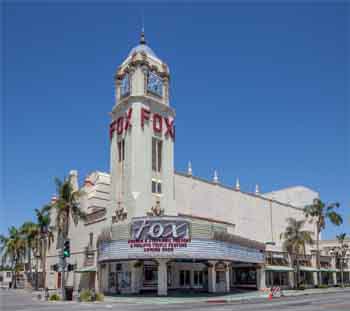 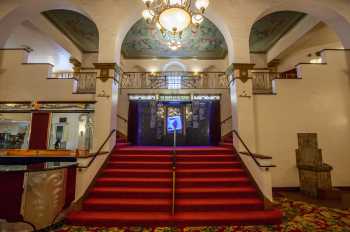 Lee designed the building in Spanish Colonial Revival style with mission tiles on the roof and white stucco walls. The building features an eye-catching tower with Churrigueresque detailing around the lower windows, slender slot windows accentuating the height of the tower, “FOX” neon signage above, and large neon-lit clock faces at the top sitting just below a ornamental dome. The building was executed in poured concrete over steel, allowing it to withstand the 1952 Kern County earthquake (M7.3) that saw many other downtown Bakersfield buildings seriously damaged and subsequently demolished. 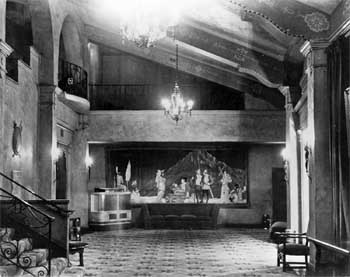 Sloping Ceiling of the Lobby

The lobby features dramatic sloping concrete beams, supporting the balcony, originally painted with stenciled geometric designs. An original 1930s followspot as used in the theatre has been made a feature in the upper lobby.

The original auditorium (1,500 seats) was an “atmospheric” design, intended to transport patrons to some far-distant land with painted mural walls and a starry sky overhead. 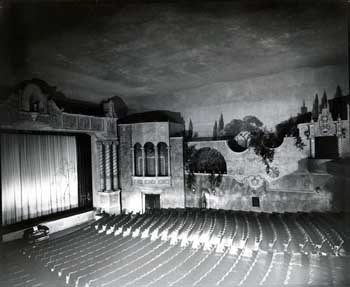 The Fox featured a Mediterranean / Spanish Colonial Revival Village theme, similar to The Arlington Theatre in Santa Barbara. The proscenium was flanked either side by sets of three pillars mounted on large pedestal bases, supporting an ante-proscenium reminiscent of a Spanish Mission, and topped with a shallow sloping tiled roof. Large faux-buildings of differing designs featuring ornamental balconies sat on either side of the proscenium, with grilles giving them away as enclosing the organ chambers. The rest of the sidewalls featured asymmetrical simulated buildings and ornamental walls draped with ivy, behind which were murals of rural Spanish countryside scenes painted onto the sidewalls giving way to the sky above, complete with painted clouds and twinkling stars. The whole affair was lit with hidden cove lighting and allowed for differing moods to be created, such as sunset for warmth and more bluish colors to suggest coolness during the hot summers. 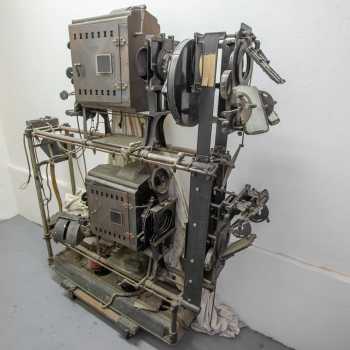 As was common with theatres of the time, the Fox had a Brenograph. These complex light projection machines, manufactured by the Brenkert Light Projection Company, were advertised as Projecting Everything but the Picture. They were most commonly used in atmospheric theatres to project moving clouds or other weather effects onto the “sky” auditorium ceiling. Brenographs were extremely versatile and could be used to project almost anything, from tableau scenes to song sheet sing-a-long words, animated effects, and enhancing the main feature presentation with color and/or surrounding projections. The Fox had the ultimate model, the F7 Master Brenograph, and as of 2019 it is still in the theatre. It is not operational but it is in exceedingly good shape and ready for renovation.

the Bakersfield Fox received a Robert Morton 2-manual, 16-rank organ. It is unknown when the organ was removed from the theatre. 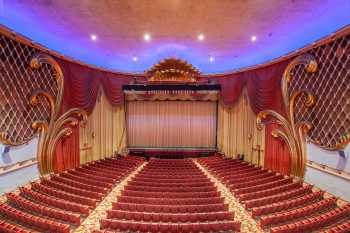 In 1953, under the management of Fox West Coast Theatres, the Fox underwent a major remodel by Carl G. Moeller to give it a more modern theme, in common with what happened to much of the Fox West Coast Theatres chain at the time. Unlike most other theatres, this late 1940s / early 1950s treatment has not been partially or fully reversed over time, and the Fox retains its full Skouras-style treatment. The style is best described as Art Moderne meets Streamline, utilizing a mix of heavy Art Deco and light rococo forms of gilded ornamentation, with monumental ornament and heavy use of drapery.

Another aspect of the remodel saw a 45ft wide, 20ft tall CinemaScope screen added, accommodated by hacking-out the ornamental plasterwork sides of the original proscenium arch. Film projectors were also upgraded. Front-of-House areas were updated as part of the modernization with a large concessions area being added. On the outside of the building a new marquee and Skouras-style box office were added on top of brightly-colored terrazzo. The theatre reopened May 1st, 1953. 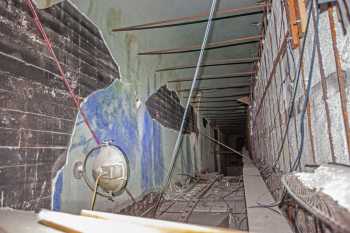 Behind some of the auditorium’s drapes there are remnants of Lee’s original theatre design including columns at either side of the proscenium, organ grilles, and plasterwork medallions. Parts of the original sidewall murals and hidden cove lighting scheme also survive.

In 1977 the Fox was closed and sat dormant for many years save for some brief activity in 1983-84. In 1994 the nonprofit Fox Theater Foundation was formed and their “Save the Fox” campaign saved the theatre from demolition thanks to generous donations from over 380 supporters.

How do I visit the Fox Theater Bakersfield?

Photos of the Fox Theater Bakersfield