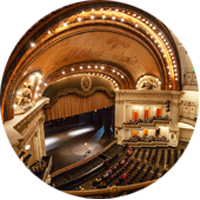 The Spreckels Theater was hailed as the first modern commercial playhouse west of the Mississippi, and has been in continuous operation – save for a couple of refurbishments – since its opening in August 1912. The theatre was commissioned by sugar magnate John D. Spreckels to commemorate the opening of the Panama Canal and the upcoming Pan American Exposition held in San Diego in 1915, and accordingly was built with precisely 1,915 seats. 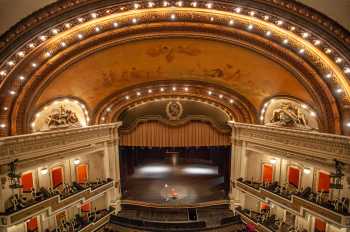 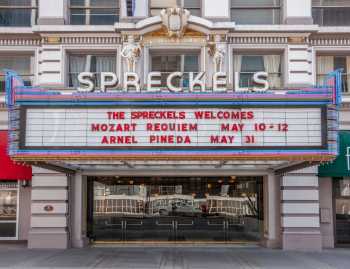 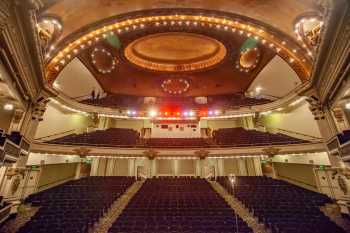 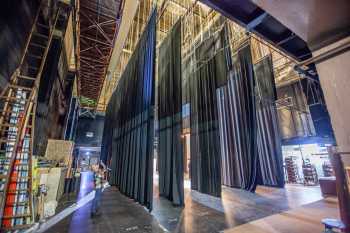 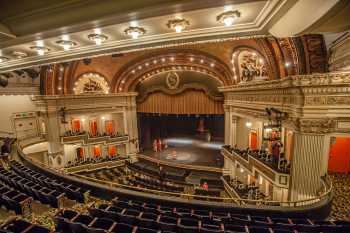 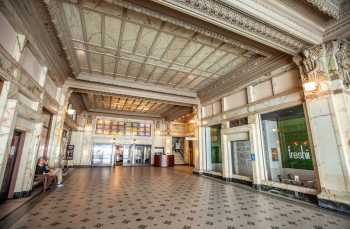 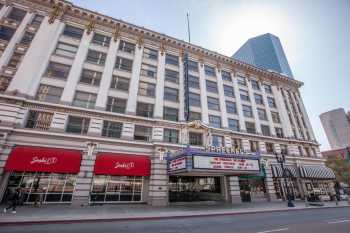 The theatre is contained within the Spreckels Theater Building, occupying an entire city block of the original downtown grid. The building is 200ft wide and 235ft deep. The front doors of the theatre’s lobby to the rear wall of stage take up the entire 235ft of depth. The auditorium is 88ft wide and 70ft deep.

Opening night was a production of “Bought and Paid For”, with Spreckels bringing the entire New York cast over to San Diego at his own expense. Originally planned to be a single performance, due to popular demand a matinee and additional evening performance were added the day after the grand opening.

Los Angeles-based architect Harrison Albright (also known for San Diego’s U.S. Grant Hotel and the Spreckels Organ Pavilion, and the Santa Fe Freight Depot in Los Angeles) designed the building for Spreckels, who had relocated his family to San Diego after the 1906 San Francisco earthquake. Having witnessed first-hand the destruction wrought by the earthquake and its ensuing fires, Spreckels was determined that his new building would be both fire and earthquake proof.

A demonstratable example of the over-engineering employed to meet Spreckels’ demands can be seen in the theatre’s fire curtain, which is composed of sheets of steel mounted on a frame and faced with two inches of vitrified asbestos – much heavier than the regular asbestos fire curtains more commonly used at the time, and requiring a significant amount of engineering to move up and down. The walls of the theatre are thick and built of reinforced concrete (a new building material at the time) and effectively separate the theatre from the entire surrounding office building, in addition to the theatre having its own independent fire escapes. 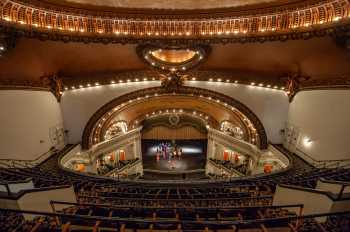 The auditorium is Baroque in style and features two balconies. The theatre’s main lobby, reached from the building entrance lobby (now called the Grand Lobby), provides access to all levels: Orchestra, two stairs to the Balcony (now called the Mezzanine), and one stair to the Family Circle and Gallery (now called the Lower Balcony and Upper Balcony respectively). The topmost level does not otherwise connect with the rest of the house except in the lobby, suggesting it may have been a somewhat segregated area – possibly class rather than racial segregation, given the theatre’s location on the generally more tolerant U.S. West Coast. Other theatres of the era had completely segregated balconies with physically separate entrances and box offices, however the Spreckels seems to have been only partially segregated. 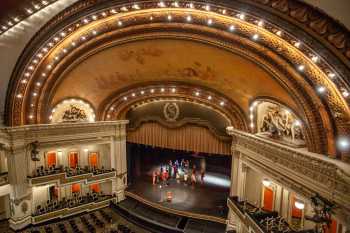 Proscenium Sounding Board and Opera Boxes

Double-height grand opera boxes step down from the first balcony toward the stage, drawing the eye toward the action. Atop the opera boxes sit grouped allegorical sculptures by sculptor Charles C. Cristadoro. The proscenium sounding board is a huge mural painted in delicate hues, depicting two angels sprinkling riches from a cornucopia (a horn of plenty) and the sea god Neptune, bringing prosperity to San Diego. The mural was painted by Los Angeles-based artist Emil T. Mazy, who also painted the complementary mural in the main ceiling dome depicting the dawn. It is flanked by four lesser domes/medallions which depict Earth, Air, Fire, and Water.

Extensive use of the-then new “electric light” was made in the auditorium. The fronts of both balconies, the front faces of the opera boxes, and accent lines in the ceiling were all highlighted with bare incandescent light bulbs, similar in style but smaller in scale to the exposed lighting employed by architects Adler & Sullivan at the Auditorium Theatre in Chicago. Lamps were removed from the faces of the opera boxes when it was found they were mysteriously going missing after performances – they were within easy reach of those seated in the boxes!

Spreckels had the most up-to-date mechanical equipment installed for heating and ventilating, to ensure the comfort of his patrons. The auditorium is notable for not having any columns obstructing views, something of a marvel in 1912. Three massive steel roof trusses support the auditorium ceiling, and the balconies are supported on cantilevers from columns at the rear of the auditorium. The acoustics were also pronounced to be perfect. The theatre was managed on behalf of Spreckels from the outset by prolific San Diego theatre manager Jack Dodge and partner Harry C. Hayward. 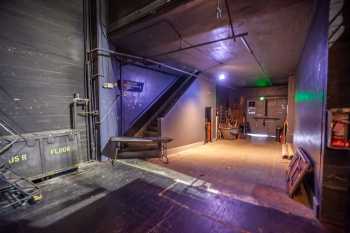 The theatre is notable for having two completely separate loading doors. On both sides of the building were built identical tall arched entrances. These open into wide and high alleys leading to the Upstage Left and Upstage Right corners of the stage. Fully-laden trucks could reverse up each alley and unload directly onto the stage. At its opening the local press noted that the double entrances “allow[ed] teams to drive from the street to the stage and [unload and then exit] through to the opposite side of the building”. The feature was used to magnificent effect when the Orpheum vaudeville circuit brought a production of “Ben Hur” to the Spreckels Theater in 1923, the finale featuring a horse-drawn chariot race which saw horses galloping at full speed across the stage, out one door then looping back to the other side unseen behind the building, and back in the other door to begin their race again many times over – all much to the enjoyment of the audience.

The theatre and building entrance lobby (now called the Grand Lobby), 30ft wide and 80ft deep, was designed to impress from the outset. Its double height walls and ceiling were entirely clad with translucent onyx, with a set of panels in the ceiling acting as a skylight and allowing onyx-filtered sunlight to be emitted in a diffuse pattern into the lobby. A Tiffany glass picture window was originally mounted above the doors leading from the main lobby into the theatre lobby, however it was required to be put into storage in the building’s basement during WWII and later mysteriously disappeared. A stunning multi-colored glass replacement, by Yaakov Agam, was installed in 1985.

Some famous name to have played on the stage of the Spreckels Theatre in the early days were Will Rogers, Al Jolson, Judy Garland, Ronald Coleman, Ina Claire, William Powell, Enrico Caruso, Mary Pickford, Lionel Barrymore, and John Barrymore.

In 1922 the theatre started regularly showing silent movies in addition to stage shows, with a projection booth being added at the rear of the first balcony.

In 1931 the theatre’s lease came to be held by Louis B. Metzger (then General Manager of Universal Pictures) and the policy became first-run movies, gradually sliding into double bills of a first-run followed by a ‘B’-movie and perhaps a newsreel or cartoon. From 1931 it was known as the New Spreckels Theater. In 1937 the theatre’s appearance was updated with a new neon marquee and a vertical “blade” sign on the building’s exterior. The building remained under control of the Spreckels family until 1943 when it was sold to the Star and Crescent Investment Company (Metzger had tried to buy it but was outbid, however remained as manager). Then in 1944 Metzger’s daughter Jacquelyn Littlefield (née Metzger) took over management of the theatre, at age 22, following her father’s untimely death.

In the 1950s and 1960s urban multiplexes were starting to rise in prominence and Littlefield had to find a way to compete. Despite offers to sell, she was determined that the Spreckels Theater was an irreplaceable architectural icon and an invaluable cultural asset to San Diego, and refused to sell the theatre. Then in 1962, Littlefield bought the entire building for $1.65 million and spent $125,000 to renovate the theatre. Plaster features were returned to their original form of gold brushed over a cream base, helping to accentuate the three-dimensional nature of the plasterwork. Seats were replaced and more generously spaced which saw seating capacity reduce from 1,915 to 1,500. Littlefield envisioned the theatre returning to its legitimate roots, which took place with the San Diego premiere of Ray Charles, Live!.

In 1976 Littlefield reached an agreement with the Nederlander Organization to bring Broadway shows to San Diego, resulting in a subscription season with stars such as Sigourney Weaver, Christopher Reeve, and Katherine Hepburn.

As part of its centenary celebrations in 2012, the Spreckels Theater initiated three improvement projects:

that the “iconic” theatre and office building was being put up for sale after 58 years of ownership by the Littlefield family.

How do I visit the Spreckels Theater?

The theatre does not offer regular tours however it does generally participate in the annual Open House! San Diego event, which ran for its third year in March 2019. For more details visit the Open House San Diego website

. (note: the theatre cannot participate in the 2020 event due to prior commitments).

Photos of the Spreckels Theater