Based on the latest CDC guidelines events are being impacted and may well have been postponed or canceled. While we endeavour to ensure information on Historic Theatre Photos is correct, there may be changes to planned events which we are not aware of. Please check the status of events directly with the venue and/or event provider. 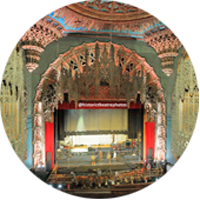 The Theatre at Ace Hotel 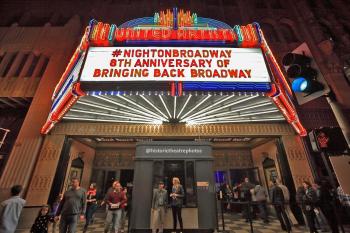 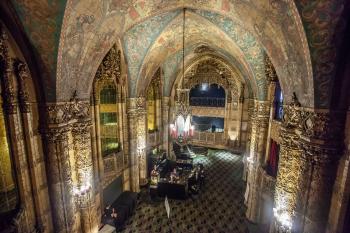 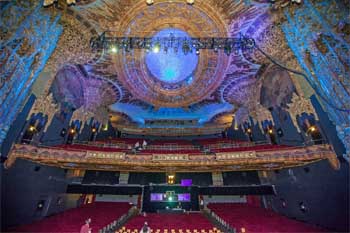 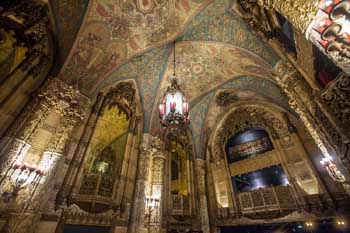 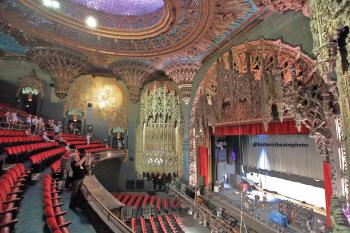 The Theatre at Ace Hotel, formerly known as the United Artists Theatre, opened in December 1927 as the flagship for United Artists’ west coast operations. Starting in 2012 the surrounding office building was converted into the Ace Hotel DTLA, and the historic theatre was renovated and re-opened in early 2014 as a live entertainment and special events venue.

United Artists was formed by D.W. Griffith, Mary Pickford, Douglas Fairbanks, and Charlie Chaplin, who broke away from the dominant “studio system” in order to retain complete control over their movie-making work. This history of United Artists is represented in the theatre’s interior decoration where murals by Jose Rivas, working for Anthony Heinsbergen’s studio, depict stars of the era, including Pickford and Fairbanks, caricatures of studio bosses as demons, and members of the United Artists’ Board of Directors as angelic figures and gods.

The theatre is part of, and set towards the rear of, the 13-story terracotta-clad office building designed for a long-term (30-year) lease to California Petroleum Corp. as their western regional offices. It was known as the United Artists Building and latterly as the Texaco Building. It was designed by architectural firm Walker and Eisen, who were also responsible for Los Angeles’ Oviatt Building and Fine Arts Building. The square tower atop the building has a solid appearance but is in fact a frame faced with pressed metal, designed to contain mechanical equipment and to bear the name of the building’s tenant on the outside. The city was persuaded to consider it a roof sign, and thus the tower ingeniously afforded the building additional height beyond the strict limits imposed by the city on buildings at the time.

The 1,600-seat theatre’s design was by C. Howard Crane, his Spanish Gothic design being very much favored by Mary Pickford. Pickford had become fascinated with the many castles and cathedrals she had seen while on honeymoon in Spain with Douglas Fairbanks. United Artists commissioned C. Howard Crane to design flagship theatres in Los Angeles, Detroit, and Chicago, and all were to utilize the same Spanish Gothic style. The 1928 Detroit theatre was so similar to the Los Angeles theatre that the elaborate plaster molds created in Los Angeles were shipped to Detroit and reused in order to realize a greater return on their expensive creation.

The auditorium sat a little over 800 on the Orchestra level and around the same in the Balcony, with an additional 200 seats in shallow, wraparound, Mezzanine. The Mezzanine was removed in 1955 (more details below).

The theatre was equipped for vaudeville and stage productions however movies were always the priority – as hinted by the quote on the fire curtain “The Picture’s the Thing”, a play on “The play’s the thing” from Shakespeare’s Hamlet.

Within the auditorium, the heavily ornamented gothic organ grilles give way to fan-shaped ceiling brackets, with a large sunburst dominating the central ceiling. The sunburst dome, internally tiled with approximately 3,000 small disc-shaped mirrors augmented with 2,000 hanging glass pendants, is lit from behind the surrounding cove by hidden lights. The original five sets of colored incandescent lamps (white, red, green, blue, and amber), controlled from the stage, allowed the ceiling dome to take on a variety of colors and permitted subtle cross fading to create different moods within the auditorium. The dome is now lit using LED technology.

The entrance lobby and front-of-house areas arch 40ft in height. The lobby features huge windows on the Broadway façade, admitting a large amount of natural light to flood in which then bounces off the large gold-tinted mirrors on either sidewall, giving the impression of a much larger and brighter space. The lobby ceiling is painted to emulate stained glass. The gothic theme continues in the main/inner lobby, with elaborate plasterwork and gothic-themed decoration adorning the walls, including representations of gothic tapestries. Multiple levels, allowing for audience circulation to the Balcony and old Mezzanine, encircle three sides of the main lobby affording views of the lobby from above. False balconies painted onto the opposite wall afford a sense of symmetry.

West Coast Theatres initially managed the theatre on behalf of the United Artists Theatre Circuit. In 1929 Publix Theatres were appointed to manage the theatre’s programming, a relationship that lasted until sometime in 1931, and in early 1932 following some independent management, the theatre closed. Much later in 1932 the theatre reopened as Grauman’s United Artists under the management of Fox West Coast and by the direct supervision of Sid Grauman. True to form, it was Grauman’s name that appeared on adverts and billboards with scant mention of Fox West Coast.

In the 1950s the United Artists Theatre Circuit took back direct control of the theatre following the government anti-trust suit which forced the studios to divest themselves of their theatre holdings.

In 1955 the theatre underwent major work to equip it for screening Todd-AO films. The theatre’s 3-manual 27-rank Wurlitzer organ (Style 260, Opus 1731) was removed and sold to North Hollywood organ enthusiast Buddy Cole. The shallow Mezzanine, seating 200, was removed to accommodate a new projection booth at the rear of the Orchestra seating. Todd-AO heralded a 52-week run of “Oklahoma!”

, however the theatre was closed at the end of the run in late 1956.

In October 1961 the theatre reopened as the Alameda Theatre screening Mexican films, which lasted until mid 1962. Metropolitan Theatres later programmed the theatre however it closed again in 1989.

In 1990 the Los Angeles University Cathedral took over the entire building for church use, first as a tenant and then later purchasing the building. During this time much of the former 1920s opulence was restored by the church.

In 2010 the Los Angeles University Cathedral vacated the building and moved to Glendale. After a couple of years in limbo, the Ace Hotel Group

purchased the building in 2012 and subsequently converted the 13-story office building into a hotel, opening in early 2014. The theatre was reopened as The Theatre at Ace Hotel on 14th February 2014, with a concert by English space rock band Spiritualized. It is now heavily programmed and plays host to a mixture of live events, movie screenings, television recordings, and entertainment shows.

How do I visit The Theatre at Ace Hotel?

The Theatre at Ace Hotel does not offer its own tours however below are some options for seeing a bit more of the theatre than by simply attending one of the many and varied events it hosts:

Check out the Theatre At Ace Hotel’s events calendar

for upcoming events, some of which are free, at the theatre.

Photos of The Theatre at Ace Hotel