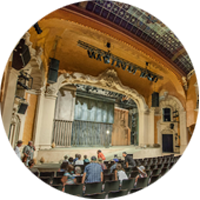 The Pasadena Playhouse building dates from 1925, however the Pasadena Community Playhouse Association was founded by theatre impresario Gilmore Brown in 1918. Originally sharing performance space with a burlesque show at the Savoy Theatre, by 1925 Brown and the citizens of Pasadena had raised enough money to purchase land and build the current theatre. 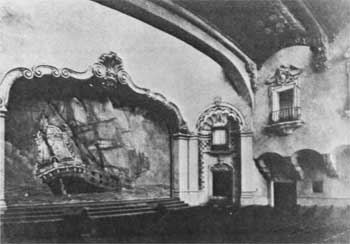 The Playhouse’s Spanish Colonial Revival style, as photographed in June 1926

The Playhouse was designed by Pasadena artist and architect Elmer Grey, who also designed the Beverly Hills Hotel, the Huntington Library, and the California Institute of Technology (CalTech) campus. Grey designed the Playhouse in association with Dwight Gibbs (architect for the interior decorations and who would go on to design the Carthay Circle Theatre), in a Spanish Colonial Revival style, evocative of the Spanish Missions distributed throughout California. The theatre’s asbestos fire curtain, still extant, featured a sailing ship and was painted by local artist Alson S. Clark. Building was by the Winter Construction Company, and the final cost was approximately $300,000.

Grey’s design reflected the ambitious plans Brown had for staging plays in new and provocative ways by using parts of the auditorium as extensions of the stage. Balconies were included on either side of the proscenium, accessible from the stage, which Grey described as being “similar to those which we are wont to associate with Romeo as he whispered love to Juliet”. The stage floor extended over the orchestra pit with steps down to the first row of seats, the music “being carried through the steps by means of sound conveying material”. 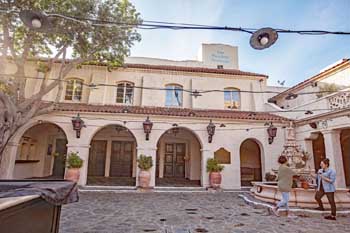 Similar to the 1922 Egyptian Theatre in Hollywood and the 1925 Fox Fullerton, the Pasadena Playhouse featured the “courtyard lobby” concept, whereby the main audience circulation space was in front the theatre in an outdoor courtyard. Taking advantage of the agreeable Southern Californian weather allowed for a more Mediterranean feel and helped to create a buzz about events at the theatre as passers-by saw crowds gathering. The courtyard’s stone pavement was reported to be made of petrified sea plants and ferns, found around 200 miles from the sea in Nevada at an elevation of 5,000ft. On either side of the courtyard were small shops, and above the shops on the north side was a recital hall with small stage, called the Balcony Theatre. In July 2006 it was renamed the Carrie Hamilton Theatre in honor of Carol Burnett’s daughter, the late writer and actress who died in 2002. It is a 99-seat “black box” theatre.

A Green Room was located directly underneath the stage with dressing rooms and chorus rooms opening into the communal space. Although a convenient location for the performers, its concrete ceiling and location prevented stage trapdoors from being used. Access to the Orchestra Pit was from the Green Room and its steel fire door is still extant although the Orchestra Pit is gone. A flight of stairs on either side allowed access to the Green Room from the auditorium, designed to cater for the “Drury Lane fashion” of inviting the audience down to the Green Room to meet the actors after performances. 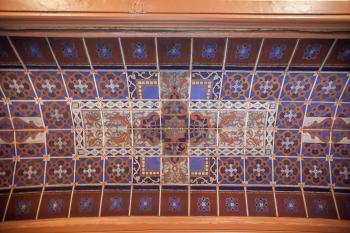 The polychrome ceiling, which has an appearance of tiles, is actually painted gauze over a thick layer of felt

The acoustics of the auditorium were often praised, likely due to the polychrome ceiling being covered with two inches of felt and cloth retained by mesh. Advanced stage lighting features were disappearing footlights both at the front of the stage and the rear, the latter for lighting the plastered rear wall. Also noted were the concealment of lighting fixtures in the false boxes in advance of the stage, and hidden lighting positions above the first auditorium ceiling beam for lighting the front of the stage.

In 1928 Gilmore Brown established the Pasadena Playhouse College of Theater Arts, offering classes in acting, speech, directing, production, and the history and literature of drama. The college expanded quickly as young performers enrolled from across the country, hoping to break into the budding motion picture industry. Eventually, considered second only in the country to Julliard, the college grew to 300 students and employed three dozen faculty. Countless playwrights, directors, and actors received some of their early training at the school, such as Jamie Farr, Gene Hackman, Dustin Hoffman, William Holden, Rue McClanahan, and Sally Struthers. These “golden years” at the Pasadena Playhouse, running until the mid-1940s, saw presentation of 306-322 performances per year across as many as five performance spaces.

In 1930 a quiet lady called Fannie Morrison inquired at the Box Office as to how she might help the Association. Told of the heavy burden of the theatre’s mortgage, Mrs Morrison subsequently sent the Association a cheque for $180,000 to clear the debt. Then in 1936, Mrs Morrison donated a further $160,000 enabling the acquisition of property next to the theatre, allowing for the building of the six-story annex. The annex allowed all the Association’s and College’s departments to operate more efficiently by being located on the same site. 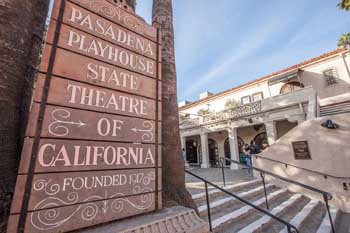 After the ambitious staging of the entirety of Shakespeare’s works, the theatre was officially recognized as the State Theatre of California by the California Legislature in 1937, having “brought national and international renown to the state as a center of dramatic art”.

Due to financial difficulties brought about by a number of factors (greater competition, television, the death of Gilmore Brown, and a wider array of theatre schools), the Playhouse closed in 1969. In 1970 the Pasadena Playhouse Association and the College of Theater Arts were dissolved.

The threat of demolition was never far away, however in 1975 the building was listed on the National Register of Historic Places as “an excellent example of Spanish Colonial style” and “an example of the work of noted Los Angeles architect Elmer Grey”. In 1979 the city of Pasadena purchased the building and obtained a grant from the Economic Development Agency to begin restoration, reopening it in 1986 as one of the oldest professionally operated theatres in California, with the intent of producing plays that would tour other California venues. 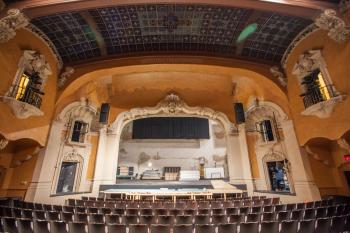 The Playhouse auditorium in 2019

The Playhouse was never far from financial difficulties since its reopening, saddled with millions of dollars’ worth of debt from earlier unforeseen expenditures during the theatre’s restoration. In late January 2010 it was announced that the theatre would close early February, with the balance of the season cancelled. In May 2010 the Playhouse filed for bankruptcy, with the intention to restructure to reduce its financial burden. The Playhouse emerged from bankruptcy in July 2010, largely due to a $1 million matching gift from Mike Stoller, half of the songwriting team Leiber & Stoller, and his wife, Corky Hale Stoller.

With an operating budget of around $7 million in 2016-17, finances remain tight at a time when donations and grants are scarce. At the end of the 2016-17 season Sheldon Epps stepped-down as Artistic Director, with Danny Feldman taking over the reins in a new dual role of Producing Artistic Director.

The Playhouse has on-site wardrobe, prop, and scenery facilities. The large scenic workshop, located in the base of the six-story annex and directly behind the stage, includes a paint frame. The theatre’s 1925 electric switchboard, originally costing $15,000, controlling 116 dimmers, and weighing-in at 6 tons, has been retained and is preserved in the theatre’s scenic workshop.

How do I visit the Pasadena Playhouse?

The Pasadena Playhouse runs ad-hoc tours for individuals and groups. For further information go to the Tours section of the theatre’s website

Photos of the Pasadena Playhouse