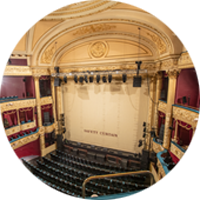 The Theatre Royal is Glasgow’s oldest theatre having first opened in 1867. Following a fire, the theatre was rebuilt in 1880 to the designs of Charles J. Phipps, and is now the largest surviving example of Phipps’ theatre work. In 1957 the theatre was turned into a television theatre for use by the then newly-formed Scottish Television (STV). Following STV’s move to larger premises, Scottish Opera bought the theatre and reopened it in 1975.